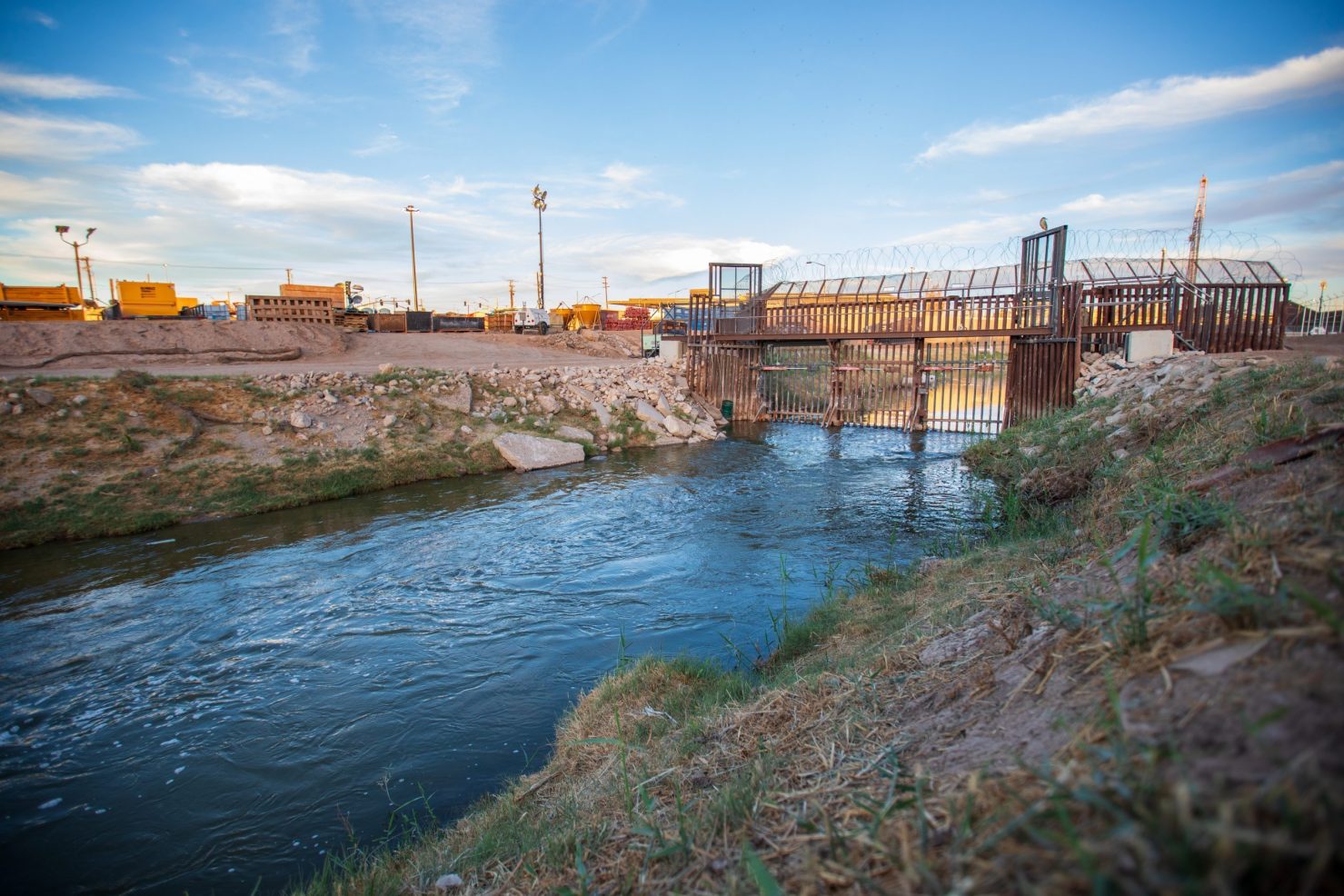 The New River is shown where it crosses the international border from Mexico into the United States in Calexico. | KENNY ROBERTSON PHOTO
Home
Regional News
In Regional News

Members of the Imperial County Board of Supervisors during their meeting on Tuesday, Feb. 23, discussed potentially suing the United States government or sending a strongly worded “demand” letter to federal officials to try to sway them to take action on building a wastewater treatment facility on the border to help clean the filthy waterway.

Pollution at the New River has been an ongoing issue for Imperial County residents and local politicians for decades as federal legislators have made promises they’ve almost never kept to address the toxic waters that are filled with human waste and heavy metals from the industrial and biological runoff of the city of Mexicali and surrounding areas.

The discussion Feb. 23 took place in response to a letter from Daniel Avila, acting commissioner of the International Boundary and Water Commission, U.S. section.

The letter, in response to two county letters expressing concern over water-quality issues at the New River, summed up what the IBWC has done regarding the New River. Actions have included the North American Development Bank helping to prevent bypasses of untreated wastewater to the New River by purchasing four mobile pumping systems in February 2018, the bank and U.S. Environmental Protection Agency exploring options for acquiring additional equipment for Mexicali in a border environment infrastructure fund project, and possibly using California Clean Water State Revolving Funds to pay for future infrastructure on the U.S. side of the border.

“Essentially there was no agreement to enter into an MOU with the county at this time, and there was no discussion about constructing a treatment facility on this side of the border,” said Adam Crook, county counsel, while summarizing the letter’s contents.

Board members had varying responses, with District 4 Supervisor Ryan Kelley even calling the letter a slap in the face.

“This is a bunch of B.S.,” said District 1 Supervisor Jesus Escobar, who represents the border region.

“They’re almost going from one side of the spectrum to the other, and they’re trying to assist the Mexican authorities from a financing perspective to build their own infrastructure. That’s a political issue,” he said. “At the end of the day, you charge your ratepayers based on infrastructure needs. Why do we have to finance it and why are we again at the end of the stick on a continual basis.

“We’ve been dealing with the New River for decades. The state stepped up to the plate, which we’re thankful for, but that’s putting a bandage on a hemorrhaging wound. At the end of the day, we do need that wastewater facility. It’s going to directly assist us from a Salton Sea perspective as well,” Escobar said.

“At the end of the day, there’s no argument that we need this here, and we’ve been needing it for decades, and there’s no excuse at the federal level,” he added. “I mean $100 to $200 million, lowballing and highballing the needs of a wastewater facility in the Southern Imperial County area. The numbers are black and white, and from a federal government perspective, it’s chump change. I think we really need to push this envelope a lot stronger, a lot harder.”

Escobar asked county staff if a letter demanding action would help, to which board Chairperson Michael Kelley said it “wouldn’t hurt.”

Escobar said that he felt his blood was starting to boil.

“Who the hell will not be in favor of a wastewater treatment facility for raw sewage spilling into our country and our county and my city?” he said. “From a legal regard, and maybe I’m going overboard on this, but I’m throwing it out there, what about the county of Imperial suing the federal government for its lack of due diligence in this regard?”

“That’s something we need to explore in greater detail, and if we’re going to have that discussion, we should probably agendize that at a future meeting,” Crook said.

“If it’s OK with the board, I would like to look into it,” Escobar said.

In recent weeks, federal policymakers, including Congressman Juan Vargas, D-Chula Vista, have introduced legislation to address some concerns at the New River.

The legislation would require the U.S. Environmental Protection Agency to establish the California New River Restoration Program, according to a press release from Vargas’ office.

Once enacted, the program would provide grants and technical assistance for the planning and implementation of conservation strategies for the New River and the surrounding region, according to the release.

Closer to home, the state has been at the forefront of showing leadership on the New River, as the Legislature has allocated tens of millions of dollars over the last several years for infrastructure and greenbelt projects at the New River, where it enters Calexico.

On Feb. 3, Calexico City Manager Miguel Figueroa reported he had received a call from Sacramento informing him the “execution phase” of the city of Calexico’s funding agreement with the state Department of Water Resources for $28 million was underway, enabling the city to finally start construction on the infrastructure projects tied to the Calexico reach of the New River Improvement Project.

The state last year allocated $18 million in new money from its general fund and another $10 million from the 2018 Proposition 68 water bond for the project, which will see the city turn ground in the first half of this year on the long-awaited three technical components of the project.

Those three technical components include an automated trash-screen diversion structure south of the Second Street bridge where the river crosses the international border, the encasement of the river from north of the bridge to where the river reaches the All-American Canal, and a pumpback system/force main that will tie into the city’s wastewater treatment plant, clean a portion of the river water, and provide for a “freshwater” stream along the river basin in the area.

The city has already hired a consultant to manage the project, Jose Angel, the former executive director of the state Regional Water Quality Control Board, Region 7, Colorado River Basin.

Next steps in the improvement project are securing regulatory permits from the state Department of Fish and Wildlife, the Regional Water Quality Control Board, and the U.S. Army Corps of Engineers to commence work, and then it’s on to the procurement process, and then construction.