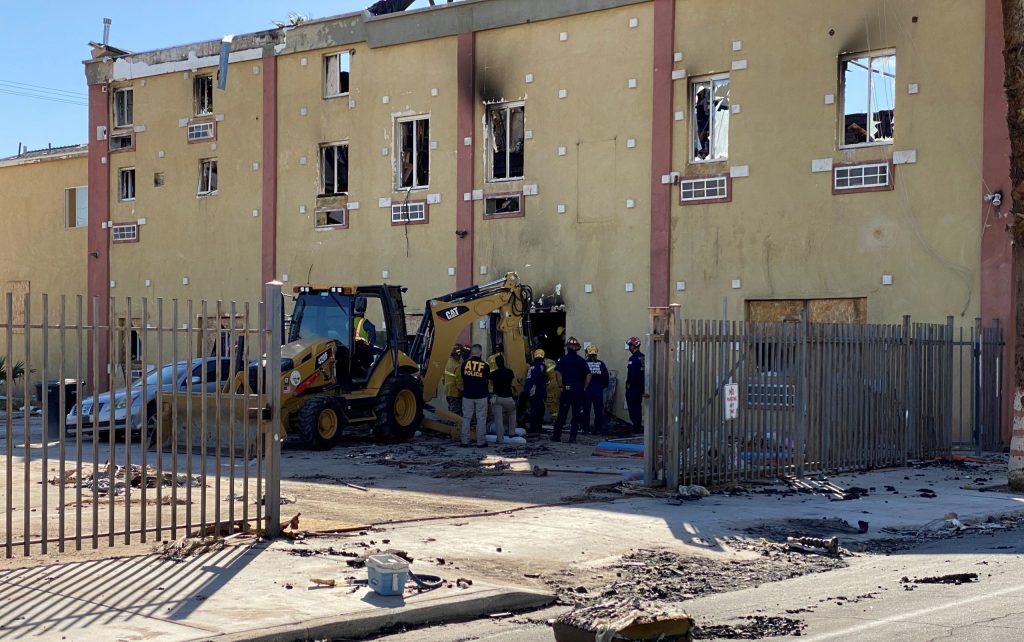 El Centro Fire Department personnel, members of an Orange County search and rescue crew, and at least one agent with the federal Bureau of Alcohol, Tobacco, Firearms, and Explosives can be seen surrounding an opening on the east side of the burned-out Mayan Hotel that caught fire late Saturday night, Feb. 13. Cadaver dogs from out of the area were brought in to search the ruins of the vacant building on Wednesday, Feb. 17, and the dogs had alerted to the presence of something several times throughout the day. | CAMILO GARCIA JR. PHOTO
Home
Public Safety
In Public Safety

EL CENTRO — El Centro Fire Department personnel with the help of various agencies from outside the area searched for the potential remains of an individual inside the charred ruins of the Mayan Hotel on the afternoon of Wednesday, Feb. 17, although no remains were found.

Earlier in the day a pair of cadaver dogs on loan from the Orange County Fire Authority had alerted to a location amid the debris that could signify the location of a dead body, El Centro fire Battalion Chief Cedric Ceseña said.

However, the cadaver dogs might possibly have alerted to the scent of a previous individual’s death that had occurred while the hotel was in operation.

Members of the Orange County Fire Authority’s urban search and rescue team, at least one agent with the federal Bureau of Alcohol, Tobacco, Firearms, and Explosives, and officials with the Federal Emergency Management Agency were seen at the Mayan site on Sixth and State streets in downtown El Centro on Feb. 17.

The cadaver dogs had initially alerted to a location inside the fire-gutted building a little before noon and continued to alert to the same location in the afternoon following the removal of a layer of debris, Ceseña said.

The building caught fire late Saturday night, Feb. 13, and burned through the end of the day Monday, Feb. 15.

The read more about the Mayan Hotel fire, and to see additional photos and a video, clickhere.

ECFD personnel had remained onsite to ensure the fire was out completely and to maintain control of the scene in anticipation of a search, Ceseña said.

Security fencing was scheduled to be installed around the perimeter of the building on Feb. 17 to restrict people from entering or getting close. Authorities are concerned that the severity of the fire might have compromised the structural integrity of the building, thereby posing a danger to the public.

“It could potentially result in a collapse,” Ceseña said.

The property and the public safety issues it seems to generate has been on the city’s radar for some time and getting the property owner to address those concerns has proven problematic.

In response, the City Council on Feb. 16, directed the city to pursue legal action to potentially place the property in receivership, city attorney Elizabeth Martyn disclosed when announcing the reportable action taken during the meeting’s closed session.

If a receiver is approved by the county Superior Court, the building would be placed under the receiver’s authority, potentially allowing the city to demolish and remediate the property, Mayor Cheryl Viegas-Walker said.

“Our position is that the current condition of the Mayan poses a health and safety risk to the community and immediate action needs to be taken,” Viegas-Walker said Feb. 17.

If placed in receivership, the building would remain the property of its current owner but allow the city to take remedial action and potentially recoup any expenses associated with those actions, Viegas-Walker said.

The documents seeking the receivership are expected to be filed with the local court in the coming days, potentially allowing for a receiver to be appointed within days of the filing, Martyn said in a phone interview on Feb. 17.

The city’s expectation is that the receiver’s recommendations for the property would be made and possibly approved by the court in an expedited manner, Martyn said.

The property owner was advised by the city on two separate occasions that it intended to seek receivership, but hadn’t gotten any response, Martyn said.

“They have the right to participate in the process,” she said.

El Centro fire crews could never do an adequate search of the building the night of the fire because the heat, flames, and smoke were too intense by the time they arrived around 11:15 p.m. By 11:30 a third alarm had been called and as many as 31 fire personnel and three aerial ladder trucks were dousing the three-story building with water in an attempt to protect nearby structures as flames leapt some 10 feet into the air at times.

The former hotel-turned-apartment-complex had been closed since around 2018 and had been boarded-up for several months. Ceseña said during an interview on Feb. 14 that the building was frequented by squatters who were known to break in and take shelter in the building, although it had no power or natural gas running to it.

In mid-December, there was a smaller fire inside the Mayan. When El Centro fire crew arrived, they had to rescue a woman — presumably a transient — from inside the structure after another person outside the building informed firefighters someone was inside, Ceseña said.

No one was outside the Mayan when fire crews responded on Feb. 13, he added.

Next
Stream N’ Chill: It’s Not Lost on Me