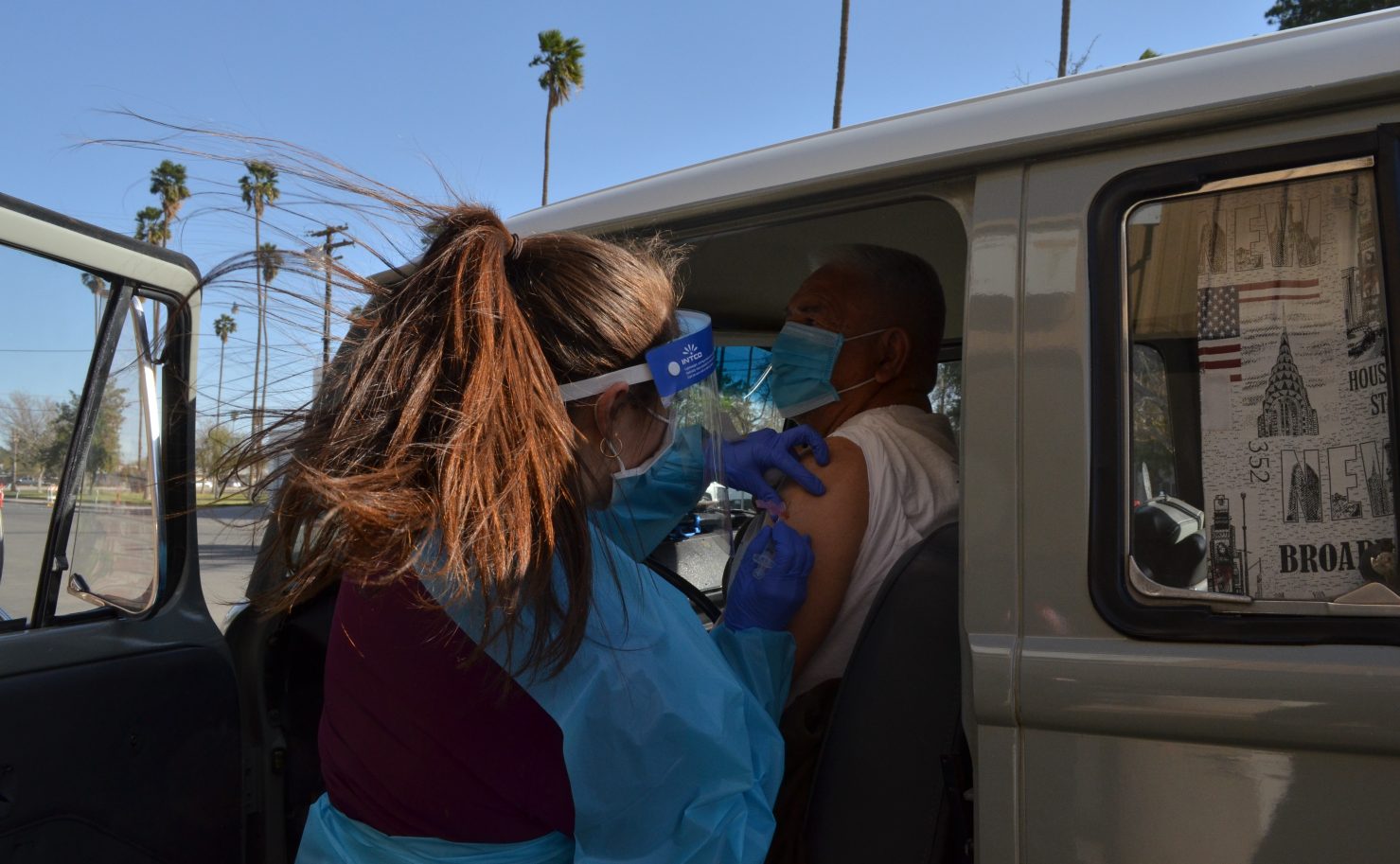 HOLTVILLE — Temporary street closures could become a common sight in front of the Pine Avenue offices of Dr. Vincent Soun now that he and his staff are leading efforts to vaccinate Holtville residents against COVID-19.

Soun’s drive-through clinic on Thursday, Feb. 25, was a first for the city and something of a test run to help finetune its logistics so that larger crowds may potentially take part in future vaccination clinics.

As it was, Thursday’s clinic was the first of a two-day event that was scheduled to see some 50 doses of the Moderna vaccine administered on each day to individuals aged 65 and older, and conclude on Friday, Feb. 26.

“This is definitely something we’ve been wanting to do for a while, and I’m glad it’s finally here,” Soun said as he observed his staff administer the vaccine to those who participated in the clinic.

His goal for the near future, which has the city’s blessing and its promise of assistance, is to start hosting large-scale drive-through vaccination clinics that would accommodate thousands of participants over the course of several successive days.

The 100 total doses of the Moderna vaccine that Soun will administer this week were allocated by the county Public Health Department, which is working closely with Soun and other local healthcare providers to host such events throughout the county.

Based on the success of the events, Soun said he is hoping to receive even larger allocation of vaccine in the future. Currently, he is the only authorized healthcare service provider to be able to administer the vaccine in Holtville.

“If we’re going to make this into a major vaccination site, all hands need to be on deck,” he said, while expressing gratitude for the assistance the city, Holtville Fire Department, and Chamber of Commerce provided. “They played a major role in helping us make this possible.”

Fire Department personnel were on hand to help monitor participants after they were vaccinated in case any suffered severe side effects.

The event’s “all-hands-on-deck” status also required the assistance of nearby Parkers Pharmacy, which was acting as the supplier of the emergency medicine that would have been used in the event a clinic participant suffered a severe reaction to the vaccine, Soun said.

For Thursday’s clinic, Pine Avenue was blocked off to through traffic and orange traffic cones were set up to guide clinic participants’ vehicles into one of two lanes where they could receive the vaccine injection.

Soun’s staff had scheduled two preregistered participants for each 15-minute interval between 8 a.m. and 4 p.m. However, organizers soon discovered that they had a considerable amount of idle time between the time it took to administer a vaccine and when the next participant would arrive for their scheduled appointment.

In response, office staff started calling those registered in the afternoon as well as for Friday to come in at their earliest possible convenience on Thursday morning, said Rosie Allegranza, chamber chief executive officer.

“Now we know for the next clinic that we can schedule more people in because everything ran smoothly,” Allegranza said.

For Friday’s event, organizers are hoping to wrap up operations by noon, she said. On Thursday, Allegranza helped verify that an arriving vehicle’s passengers were indeed on the registration list, checked their temperatures, and asked whether they were experiencing any COVID-like symptoms.

She also had a stack of registration packets to hand out to anyone interested in getting their names on a waiting list for future vaccination events.

Within an hour of commencing, Soun’s medical staff was able to vaccinate 17 people, including 67-year-old Holtville resident Victor Gastelum.

Though he considers himself to be of sound health, getting the vaccine has been a top priority of Gastelum’s, especially because of the loss of life that he has observed take place in Holtville among his group of peers.

“The majority were old people who had health complications,” he said.

As of Thursday, some 38 COVID-related deaths have been reported in Holtville, the Public Health Department’s website stated.

The 100 individuals who were scheduled to receive the vaccine from Soun’s Sarin & Tao Family Medical Clinic during the two-day event were a mixture of patients and nonpatients. He had initially requested 200 vaccines from Public Health to accommodate a larger number of seniors, said Raquel Lopez, administrative assistant.

“We still have a long waiting list of more than 100 seniors,” Lopez said.

The clinic is now currently in the process of establish a waiting list of individuals aged 16 through 64 with high-risk health conditions who, beginning March 15, will be eligible to get vaccinated in accordance with the state’s guidance, she said.

“We might as well get everybody vaccinated so we can get back to normal,” Lopez said.

Normal is something that 65-year-old Holtville resident Josie Rehn said she hasn’t really experienced since the onset of the pandemic.

Rehn was also among those who received the vaccine on Thursday morning. She said she had tested positive for the coronavirus in December and that her symptoms were limited to a lost sense of taste and smell.

The decision to now get vaccinated was prompted by a desire to ward off any more potentially severe symptoms should she contract the illness a second time.

“I thought it wouldn’t be so bad if I get vaccinated,” Rehn said.

Though a person who has been infected with COVID-19 has antibodies in their system for several months that help protect them from re-contracting the disease, the antibodies appear to wane over time, the Centers for Disease Control and Prevention website reported.

“Yes, you should be vaccinated regardless of whether you already had COVID-19,” the agency’s website stated. “That’s because experts do not yet know how long you are protected from getting sick again after recovering from COVID-19.”

The 100 vaccines that Soun was allocated were part of the 5,600 total that Public Health received either last week or this week and which were designated for local seniors, said department Director Janette Angulo during a virtual press conference on Thursday, Feb. 25.

All told, some 28,840 have been delivered to the county from state officials, with 24,083 of those already having been administered, Angulo said.

About a quarter of those vaccines have been respectively administered to seniors residing in both the county’s south and north regions, with about the other half going to seniors found within the county’s central region, which includes Holtville, according to information Angulo shared during the press conference.

Dr. Soun said his motivation for hosting his two-day vaccine event was prompted by a greater desire to help additional Holtville residents, many of whom lack the resources to attend vaccine clinics elsewhere.

A new sub-zero freezer that he had ordered in August and received earlier this month, and which can store thousands of vaccine doses, is ready for just that purpose.

“The only thing stopping us from giving (the vaccine) to people faster is the availability,” he said.