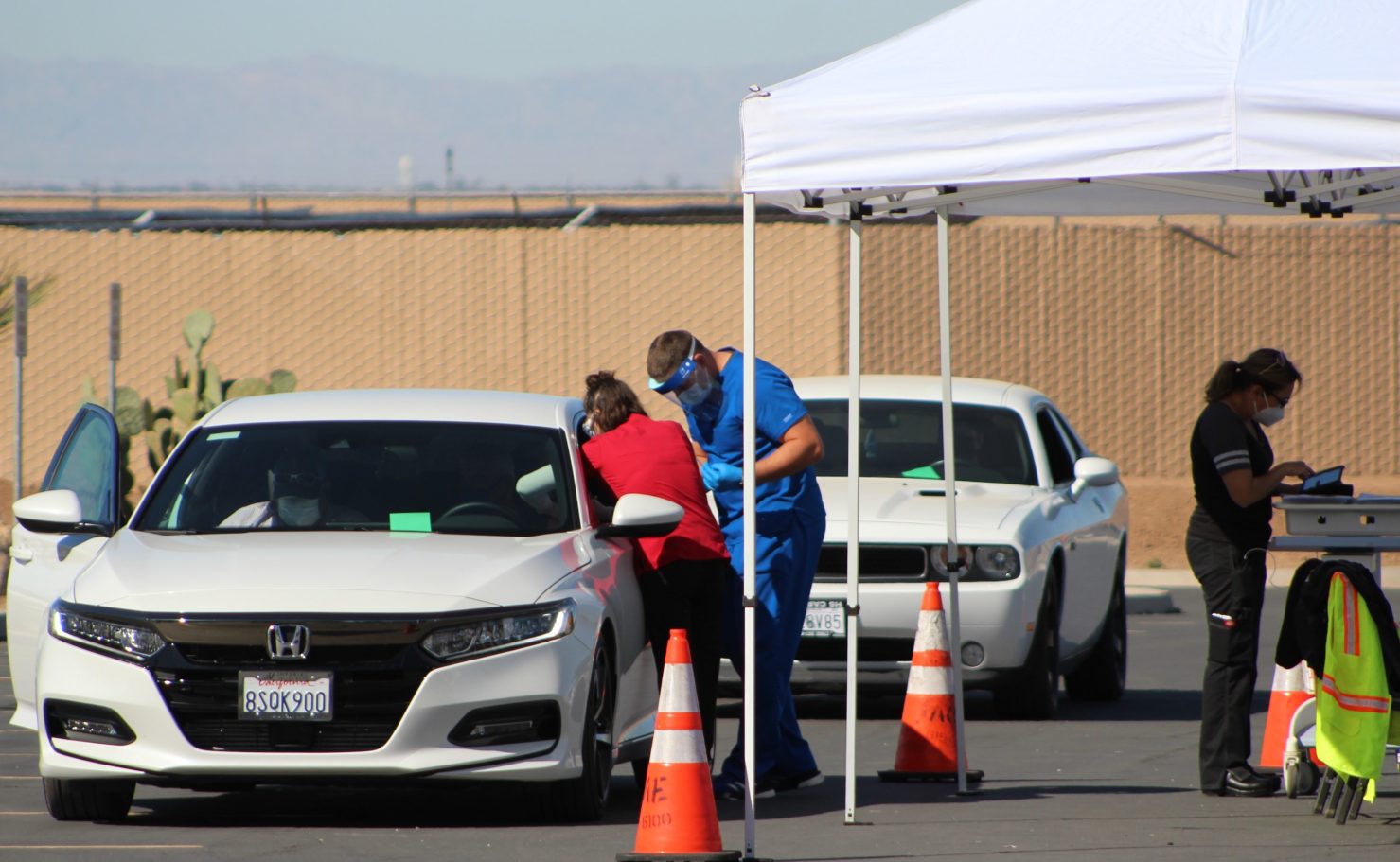 The inoculation against COVID-19 of farmworkers and ag-related and food industry sectors, as well as educators and childcare workers, continued this week on the heels of a pair of mass vaccination events at Imperial Valley College on Friday, Feb. 26.

Some 400 doses were administered to the education sector in the a.m. and 1,000 were given to farmworkers and agricultural sector employees in the afternoon.

Meanwhile, county officials were waiting to hear from the state on whether Imperial County had done enough to open to the Red Tier in the state’s roadmap to recovery.

“We’re going to be within one week of meeting the Red Tier metrics,” Public Health Director Janette Angulo during her update to the county Board of Supervisors on March 2. “In order for the county to open up to the next tier … we must meet metrics for two consecutive weeks.”

To meet the requirements, the county must maintain a case rate between four and seven per 100,000 residents and a testing positivity rate between 5 percent and 8 percent.

“This is a big step on the road to recovery for our county. Although we are not officially moving to the red, less-restrictive tier yet, this is a great sign that our community is taking all actions possible to improve our conditions and to mitigate the spread of COVID-19,” county board Chairman Michael Kelley stated in a press release sent out Tuesday afternoon.

“This is the first time, since the start of the pandemic that Imperial County has been this close to moving out of the state’s most restrictive level for activities and businesses,” stated Dr. Stephen Munday, Imperial County Health Officer, the same release. “This is very encouraging and reflective of our community’s collective efforts to slow the spread of COVID-19 locally.”

Munday told the board on Tuesday morning that efforts were underway to get ready for the move by updating the county health order, mostly by easing quarantine restrictions.

In terms of continued vaccinations, this week, more food industry workers were vaccinated on Monday, March 1, and Tuesday, March 2, with childcare workers getting their first doses on Tuesday afternoon, all in curbside mobile clinics put on by the county, Angulo said.

The vaccination of teachers and education sector workers comes as development continues in the potential of returning to in-person instruction.

Angulo reported on Tuesday that safety plans to clear the opening for a return to campus for transitional kinder students through sixth-graders were approved for the Holtville Unified School District, Imperial Unified, and Brawley’s elementary district and single-school Magnolia and Mulberry districts.

Any announcement on when those schools will resume wasn’t immediately available.

One of the biggest changes brought on by the potential to enter the Red Tier would be the state allowing all kinder through high schools to resume in-class instruction, Munday and Angulo said Tuesday, and both were due to meet with county education officials to further discuss on Wednesday.

Public Health said if the move toward red keeps on track, the earliest K-12 schools could resume in-person instruction would be Tuesday, March 9.

One of the reasons for the shift by the state was the slowly increasing availability of vaccine, including the announcement on Saturday, Feb. 27, that the Johnson & Johnson vaccine had received emergency-use authorization from the U.S. Food and Drug Administration, Angulo said.

Angulo said 4 million doses of the vaccine are in the pipeline, but she did not know what that immediately means for Imperial County. She added that Public Health should find out in a couple days if and when those doses will come.

Increased access to additional doses for Imperial County is still desperately needed despite shipments over the last two weeks that are double and triple of the prior allocations.

Imperial County was still ranking far behind most of the state’s 58 counties in terms of vaccine doses administered per 100,000 residents. The latest data from state Department of Public Health showed that Imperial sits at No. 48 in the state, with 28,390 doses put in arms, or 15,753.3 doses per 100,000 residents.

Although vaccine efficacy numbers are down for the Johnson & Johnson vaccine compared to the Pfizer-BioNTech and Moderna vaccines, Dr. Munday said the third vaccine is a game-changer.

“Logistically, it’s so much easier than the two current vaccines,” he said Tuesday.

“First of all, because it doesn’t have the onerous storage requirements, and secondly, for the time being, it’s a single-dose vaccine,” Munday said.

The Johnson & Johnson vaccine can be stored at room temperature, unlike the temperamental Pfizer vaccine that must be shipped in dry ice and kept in a special subzero freezer. The Moderna vaccine isn’t quite so problematic, but it does require storage in a freezer, too.

As far as dosing, Munday added that some studies are suggesting a two-course treatment for the J&J vaccine to increase its efficacy rate, but for now, it’s a single dose only.

Regardless of the rates of efficacy, Munday said it’s important to remember “all these vaccines are extremely effective in preventing severe disease, ICU admissions, and hospitalization.”

On the vaccine allocation front, Angulo reported Tuesday that nearly 4,000 first doses were expected this week and nearly 2,000 second doses next week.

She said information on next week’s first doses wasn’t to be known until Wednesday, she said.

Angulo reminded the county board that of the 3,840 doses due before Friday, March 5, some 70 percent were to go to the local provider network for use on seniors age 65 and older, with the remaining 30 percent staying with the county to administer to Phase 1A and 1B sectors.

Updating the board of who has received what so far, Angulo said more than half of Imperial County’s 26,000-plus seniors 65 and over have been vaccinated. She added that a mass clinic for second doses is taking place on  March 5 for 1,300 seniors, 1,200 of whom were already registered.

She added that 70 percent of all vaccine doses in Imperial County have gone to Latino residents, and 9.6 percent to unknown ethnicities. Angulo added that the “unknown” designation was a self-populated designation, meaning those receiving the vaccine either did not state their race or ethnicity or declined to do so.