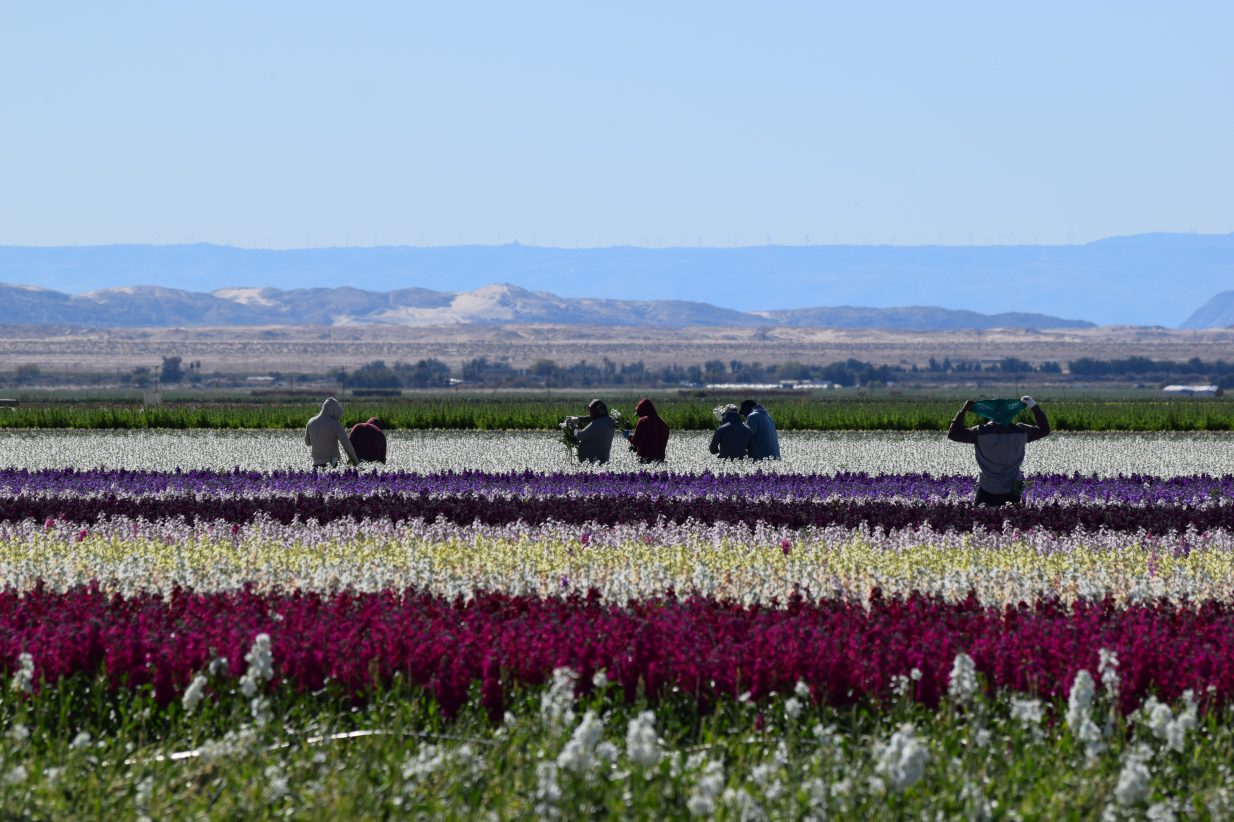 WESTMORLAND — This time of year it’s a common sight to see social media blossoming with photos of locals surrounded by pops of pink and purple, as they pose among the rows of flowers along Lack Road.

Yet these stands northwest of Westmorland, where there are pastel-hued blooms as far as the eye can see, are no tourist attraction but a commercial agri-business operation trafficking in what is commonly known as hoary stock, flowers whose color and scent are a visual and aromatic counterpoint to the Imperial Valley’s field crops and feedlots.

But they won’t be there for much longer, as the harvest is well underway.

That popular field in particular is farmed by Jose Ortiz Sr. He established Joseph and Sons more than 50 years ago, and focuses on flowers for the wholesale market.

If you buy your mom a bouquet for Mother’s Day, there’s a good possibility it was grown by Joseph and Sons.

The company has fields in Santa Paula, where the operation is based, as well as Lompoc and Imperial County, where they grow seasonal flowers on about 75 acres.

Growing flowers in areas outside the Valley allows Joseph and Sons to extend its offerings. The harvest in Imperial County runs from January through March, said Tony Ortiz, general manager, and the elder Ortiz’s son. The harvest in Ventura County runs from April through June. The company also has more than 1 million square feet of greenhouse flowers year-round.

“Imperial Valley during January to March has a great climate for that flower,” Tony Ortiz said. “It’s not too hot, not too cold, and it has a steady wind.”

Joseph and Sons only deal with businesses that buy flowers for resale or for professional use. The biggest holiday is Mother’s Day, followed by Valentine’s Day, Tony Ortiz said.

Although its difficult to isolate the value of cut flowers in Imperial County, miscellaneous nursery products (of which flowers are part) in Imperial County accounted for $7.35 million in gross value in 2019 grown on 639 acres of farmland.

Data from 2019, the last available year, is down from the value of miscellaneous nursery products in 2018, when the gross value was $7.97 million over 764 acres.

In addition to cut flowers, miscellaneous nursery products can include aloe vera, nursery plants, palm trees, and vegetable transplants, among other products, according to the Imperial County Agricultural & Livestock Report, which was prepared by Jose Ortiz Sr.’s little brother and Tony’s uncle, Carlos Ortiz, the county ag commissioner.

Already on a downward trajectory, the value of nursery products, particularly cut flowers, will likely be down again when the 2020 crop report is released later this year.

Demand was steady, Tony Ortiz said, that is, until coronavirus derailed everything.

“We came to a standstill,” he explained. “We lost the support of trucking companies and couldn’t get flowers to customers.”

Fortunately, business is picking up again. The industry is promoting flowers as healthy for life and home.

Hoary stock, whose scientific name is Matthiola incana, is planted in October, and it takes about 90 days from planting to harvest, Tony Ortiz said.

Yet stock doesn’t bloom all at once. It comes out in stages, and owing to its delicate nature, the flowers are harvested by hand.

“We harvest once a day in a certain area. One block will last us a good three weeks,” Tony Ortiz said.

It takes about 10 people to harvest one acre. They have various tasks, from helping the harvester to loading the truck.

Harvested flowers are trucked to Santa Paula, packed, and shipped out, he said.

Like many other California growers, Tony Ortiz worries about labor law changes. But the benefits of growing in the state outweigh the drawbacks. The climate is favorable, and the soil in Imperial Valley is particularly good, he added. They don’t have to use much fertilizer, and the nearby alfalfa fields are “good neighbors,” he said.

Broccoli and cauliflower growers are not concerned with the leaves of their crops, according to Tony Ortiz. As such, those fields can attract pests that could inundate his fields, he said.

With International Women’s Day coming up on Monday, March 8, Tony Ortiz said he is hoping that people take a moment to show their appreciation for the women in their lives with some flowers. Joseph and Sons will be shipping from Santa Paula.

Next
COVID Can’t Stop Youths from Showing their Market Best