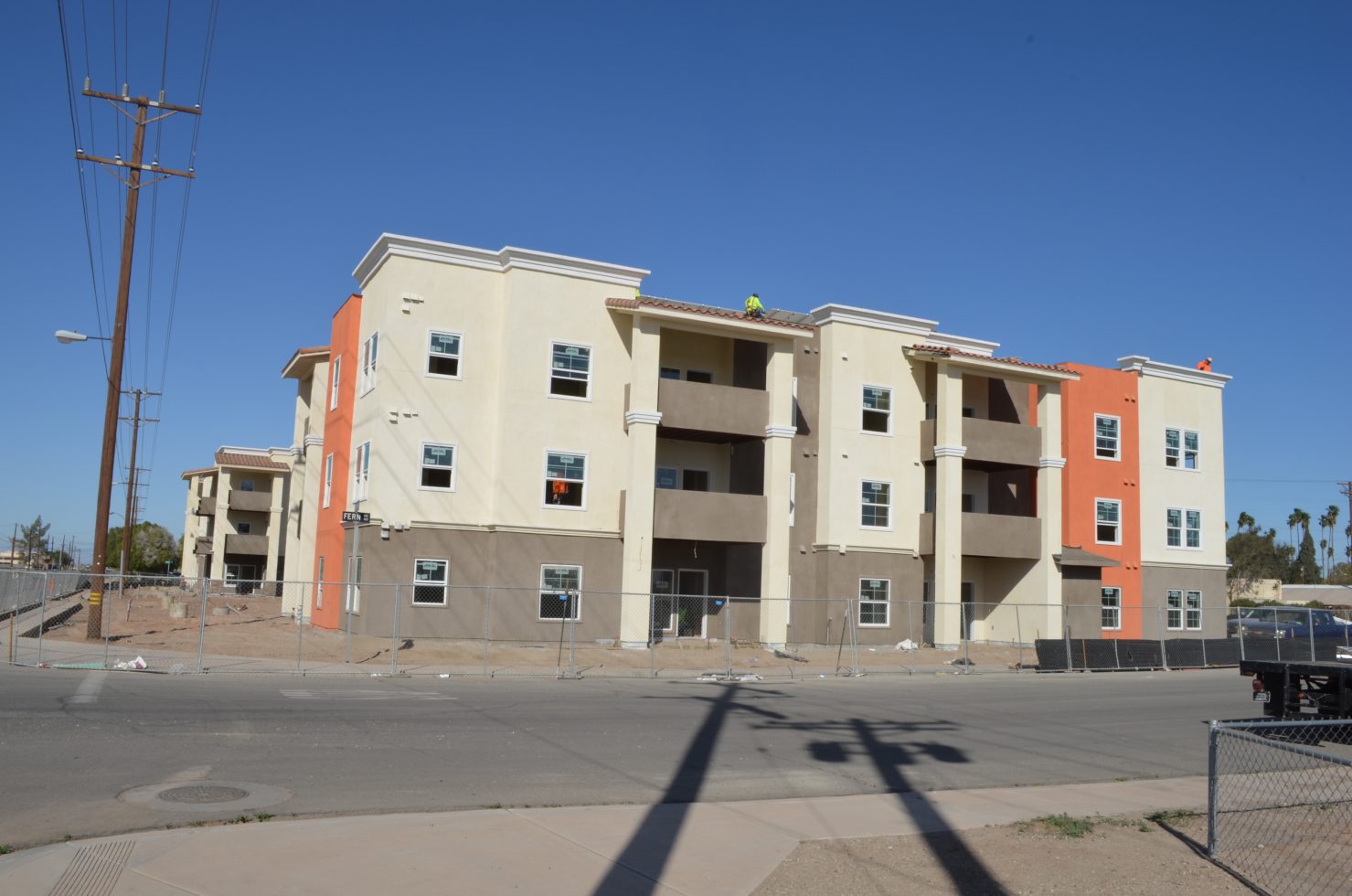 Construction remained ongoing at the Fern Crossing apartment complex on Fourth Street between Fern and Holt avenues on Tuesday, March 9. The 44-unit development has been designated as housing for farmworkers. | JULIO MORALES PHOTO
Home
Local News
In Local News

HOLTVILLE — The Holtville City Council and Planning Commission held a joint public hearing to discuss the city’s housing goals and objectives, known as its housing element, on Monday, March 8.

Though no formal action was taken during the public hearing, contract city planner Jeorge Galvan outlined the city’s population growth and the development of housing units over the past four decades.

The city has experienced an average annual population growth rate of about 1.1 percent since 1980, growing from 4,399 to 6,359 residents and making it the slowest-growing city in Imperial County, a staff report accompanying the agenda item stated.

Over the past 39 years, the city’s housing stock increased from 1,338 to 2,126 housing units, with 444 of them being classified as vacant, resulting in a total of 1,682 occupied units, the staff report stated.

The housing element is one of seven elements that comprise the city’s general plan and is required to be updated every eight years to coincide with the adoption of the Southern California Association of Governments’ eight-year Regional Housing Needs Assessment.

The Regional Housing Needs Assessment determines the number and type of housing units to be created within SCAG’s jurisdictions, which consists of six counties and 191 cities, the staff report stated.

“With the proper planning and allocation, the city can expect to achieve its Sixth Cycle (Regional Housing Needs Assessment) Allocation Goals by October 2029,” the staff report said.

The deadline for the city to have a compliant housing element update is October 2021.

The housing goals for the Regional Housing Needs Assessment’s sixth cycle span from 2022 to 2029. During that time frame, Holtville must create a total of 171 units, which is 38 fewer than the 209 the city was required to create by October of the current 2014-2021 cycle.

“Holtville still has a total of 97 housing units to create by October, but a number of residential projects have been recently approved that will meet the remaining very low, low, and above-moderate income categories,” the staff report stated.

Within the city, a total of 29 vacant sites have been identified as having the potential for residential development.

Seven of those 29 sites have the potential for the development of single-family units that could potentially add a total of 25 above moderate-income units to the city’s housing stock.

The proposed Melon project is situated at the corner of Melon Road and Ninth Street and was initially slated to create a 152-unit apartment complex.

Those initial plans were scaled back recently after several nearby residents expressed opposition to the proposed high-density housing project and the City Council voted to designate the parcels’ zoning as R-2, which allows for single-family and medium-density housing only.

The site was within the county’s jurisdiction but was recently annexed to the city with the approval of the county Local Area Formation Commission, John Hawk, the property owner, said during Monday’s public hearing.

Hawk informed the council that the seven-year-old project is moving forward at a “very slow” pace. During the City Council’s meeting on Nov. 23, it approved Hawk’s latest proposal to establish a gated community at the site.

He also credited Holtville council member and Imperial Irrigation District water department manager Mike Pacheco for helping him reach an agreement with the IID to help cover the cost of undergrounding a nearby canal.

“That breathed new life into the project,” Hawk said.

Despite the challenges associated with downsizing the project’s level of occupancy, Hawk said he is committed to moving forward with the development.

“At this point, that’s what we need to do, and we’re willing to do that,” he said.

Besides Galvan, Hawk was essentially the only other person to speak at length during the public hearing. The Planning Commission had hosted the city’s first housing element workshop on Feb. 16.

Another public hearing will be held in April to summarize the findings obtained from past public workshops and to provide the Planning Commission with additional information, the staff report stated.

City staff anticipates presenting a draft housing element to the Planning Commission in June for the City Council to potentially act on in July.