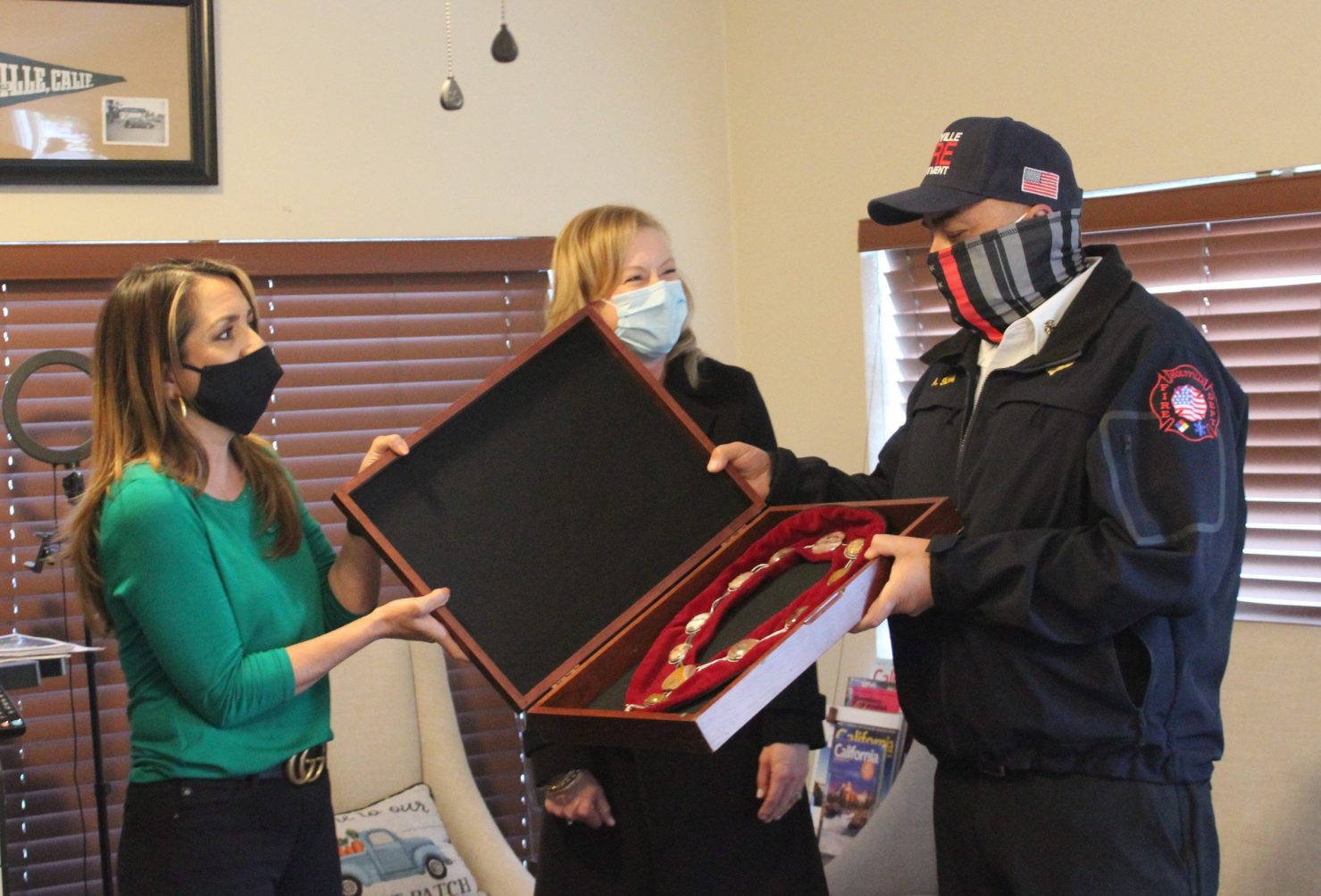 Holtville’s Citizen of Year for 2020, Helina Hoyt (center), is presented with the ceremonial necklace passed on to each Citizen of the Year award winner. Making the presentation and announcement of the award for 2020 was Holtville Chamber of Commerce executive Rosie Allegranza (left) and city Fire Chief Alex Silva at the Holtville chamber on Thursday evening, March 11. | CATHI PHILLIPS LARIOS PHOTO
Home
Local News
In Local News

Helina Hoyt is Holtville’s 2020 Citizen of the Year

In a COVID-impacted year that has changed how many of the beloved traditions in Holtville are being celebrated, the Holtville Chamber of Commerce’s annual Citizen of Year award went online in a Facebook Live presentation in which Hoyt received the ceremonial necklace that goes along with the designation.

With “Superhero Healthcare Workers” being the theme of this year’s modified Carrot Festival activities, Allegranza said Hoyt’s selection as this year’s Citizen of the Year is “perfect.”

Thursday’s announcement precedes this weekend’s COVID-abbreviated events, including a caravan of floats through the city starting at 10 a.m. Saturday, March 13, that takes the place of the annual Carrot Festival events and a farmers’ market to follow at Samaha Park.

Hoyt cannot attend this weekend’s festivities and won’t get a chance to ride on the Holtville chamber’s healthcare worker-themed float, which is one of the reasons why the presentation was made at the last minute, Allegranza indicated.

“I’m so proud of Helina … This is not only to honor her, but an honor all of our healthcare workers,” Allegranza explained.

The grand marshal of the caravan will be the collective healthcare workers riding on the chamber float on Saturday, the chamber executive added.

Appearing on the Facebook Live presentation, Allegranza and Hoyt were joined by Holtville Fire Chief Alex Silva, all of whom posed for photos as Hoyt was passed the ceremonial necklace created several years ago by Holtville native, the late Jim Strain.

Strain, who died in 2013, was past president and lifetime member of the Imperial Valley Gem and Mineral Society. He used his lapidary skills to craft the keepsake that is passed to each Citizen of the Year. The award has been bestowed on a noteworthy Holtville resident each year since 1954, when Bill Thornburg was the inaugural winner, according to Allegranza.

Each year, the citizen of the year comes from nominations, and this year’s nomination of Hoyt came from Holtville residents Hayden and Heather Norris.

“Helina exhibits citizenship and honesty in various ways … she often uses her connections to help those in need by bringing a meal, offering medical advice, or rides to appointments, and helping elderly folks. She has been at sporting and performing arts events for other people’s kids, just to encourage those kids,” reads the Norrises’ nomination form.

“Helina has devoted countless hours to helping students with 4-H projects,” the nomination continued. “As she has helped students in 4-H, she has been a role model to them by teaching them to work diligently, to keep an honest record of work, and to focus on gaining life skills rather than monetary profit.”

The Norrises also credited Hoyt with giving of herself even with a full work and home life, adding that she often cheers on the successes of others and champions the good that people from Holtville and the larger Imperial Valley community are doing to benefit the lives of others.

“She is proud of achievements that local people are making, especially in the medical field,” Hayden and Heather Norris wrote.

Hoyt, who has a Ph.D. in education, a master’s in community health nursing, and is an accredited registered nurse and public health nurse, has been a full-time lecturer and the nursing program coordinator at SDSU-IV since 2007.

She has been a guest lecturer at HESAV (Haute Ecole de Santé Vaud) and La Source Universities’ summer nursing institute in Switzerland, a nursing/citizen correspondent on KQED Public Radio, an intensive-care unit charge nurse, a burn unit ICU nurse, and a K-12 school nurse, among the many positions and highlights of a long and decorated career.

Next
State of County: Chairman Kelley Rings ‘Hopeful’ Tone for Imperial After a Year of COVID