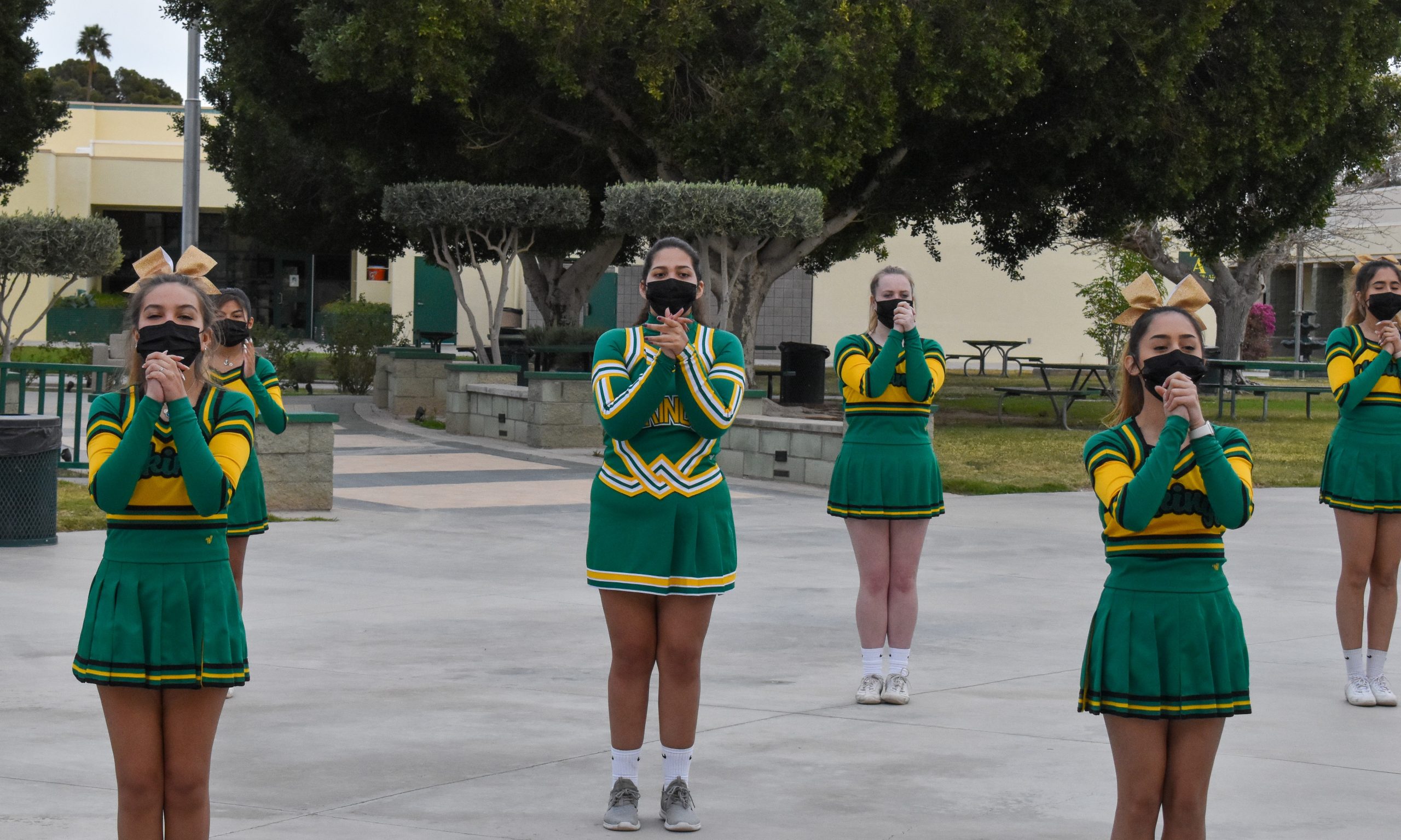 Football’s Back and Cheer’s Coming, Too, But At A Slower Pace

HOLTVILLE — With Friday Night Lights set for a Saturday night debut at homefields in Holtville and at Southwest in El Centro on March 13, this odd duck of a COVID-delayed football season might not be what many of us have come to expect.

A two-ticket-per-athlete limit on who can sit in the stands and abbreviated appearances allowable for marching bands and pom-pom-waving cheer squads could seem a bit extreme, but the way Holtville’s athletic director and vice principal CJ Johnston sees it, keeping kids and others safe from a climate upended by the coronavirus is job one.

“We’re doing all we can to make sure our kids are safe and sound while they’re doing their best to be kids, to have fun, to experience life,” Johnston said.

Holtville’s cheerleaders, and other cheer squads and marching bands throughout the Valley, will get their chance to perform per allowances afforded by Imperial County’s movement into the state’s Red Tier on Wednesday, March 10, yet in a modified manner.

The Vikings’ cheerleaders will be on the field for a halftime show, but that’s it.

“This isn’t forever. My girls are excited regardless of anything,” Gonzales said. “They’re just happy to be able to be practicing with their teammates again, so that in and of itself is already a plus. We should just be counting our blessings, at this point.”

Johnston said that’s the nature of bringing back sports and all those things that go with it after a year on lockdowns and life off campus.

“Part of that is making sure that while we do allow some activities according to the state and county guidelines, we also hold off on others to ensure everyone’s well-being and safety,” he said.

Under the California Department of Public Health’s guidelines, cheerleading, for instance, is listed as an outdoor-moderate contact sport. As the situation currently stands, cheerleaders will be allowed to participate in sporting events and have been practicing, but their performances will be limited to halftime shows to mitigate the possibility for COVID transmission.

“Cheering, shouting, or yelling of any kind,” California Public Health states on its website, “within close proximity of other people, especially at sporting events, furthers the chances and ultimate risk that someone will contract COVID-19.”

El Centro resident Jenny Juarez, whose daughter cheers for the Central Union High Spartans, was speaking to her pom-pom waver this week and said feelings were mixed.

“On the one hand, we’re grateful to have cheer back in our community which allows our young women to, once again, be active,” Juarez said. “On the other hand, we’re sad to see it in such a limited state of functioning. It keeps us from really feeling like life is coming back.”

Of this weekend’s two home games, Holtville had its cheerleaders on the field, and Vincent Memorial brought its cheer squad to its away game against Southwest High at Eagles Field in El Centro.

Ruben Valenzuela, Southwest High’s athletic director, said there would no Southwest cheerleaders or marching band on the Eagles’ side, and Holtville won’t have its band because it wasn’t ready to perform just yet.

“Things can change on a dime,” Johnston said of the flow of information between schools and health officials. “For all we know, next week there can be a drop in the cases and the situation can flip a certain direction. We don’t know. We’ll just have to see.”