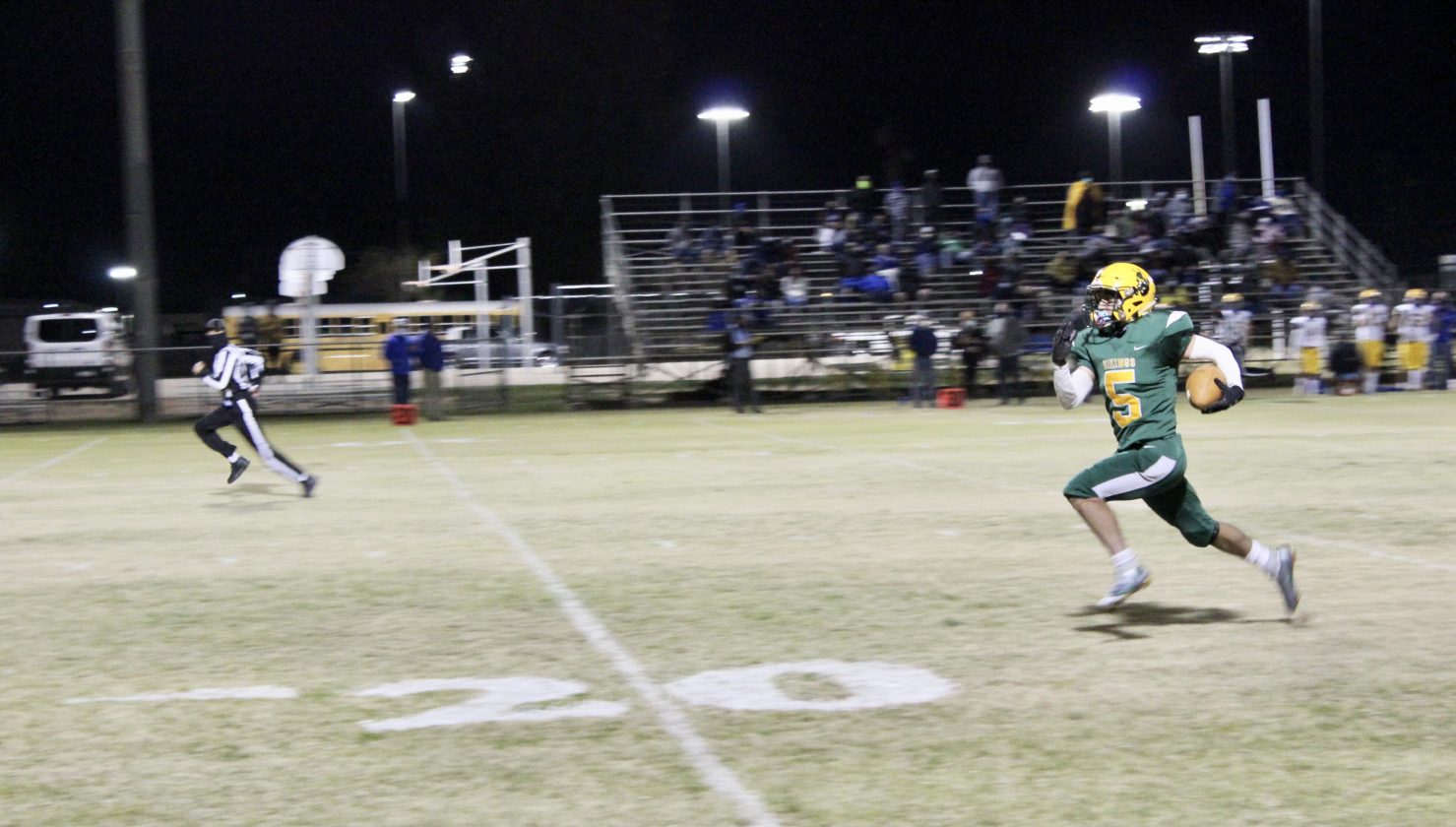 HOLTVILLE — After 15 months without high school football in the Imperial Valley, opening night of a COVID-delayed and shortened season brought a thriller, as Brawley edged Holtville, 23-22, at Birger Field here on Saturday, March 13.

The Vikings dominated the first half and jumped out to a 20-0 lead with just about a minute left in the opening half when the Wildcats got a key score with four seconds left. That late score seemed to turn the momentum in Brawley’s favor for the remainder of the game.

“We did a good job in the first half of controlling the ball and avoiding costly mistakes, but it has to be done for four quarters,” said Jason Turner, Holtville’s fourth-year head coach. “Credit Brawley and their coaching staff for getting the key plays when they needed them.”

Up 20-15 with about five minutes left in the game, Holtville was able to sack Brawley quarterback Ethan Gutierrez in the end zone for a safety and increase its lead to 22-15.

The Wildcats then kicked off, and the Vikings weren’t able to jump on the bouncing ball. Brawley’s Luis Frutos recovered the kick, and the Wildcats took possession at the Holtville 43-yard line.

The Wildcats methodically moved down the field, converting a third-and-11 with a 19-yard scamper by Gutierrez, and then scoring on a fourth-and-2 with junior running back Isaiah Young finishing the drive with a touchdown.

Now down 22-21, Brawley decided to go for the two-point conversion with 1:13 left in the game. The Wildcats’ called Young’s number again, and he was able to power his way across the goal line for the conversion and give Brawley the 23-22 lead.

After the ensuing kickoff, Holtville had 1:08 to try to mount an attack and the Vikings moved the ball as far as the Brawley 35-yard line. With half a second to go, Holtville’s last-ditch attempt at a Hail Mary fell incomplete in the end zone.

“We had some injuries throughout the game, but that’s not an excuse for some of the second-half mistakes we made,” Turner said. “We saw a lot of good things we can work with out there tonight and we saw some things that we need to correct.”

The Vikings dominated the first half, allowing Brawley just three offensive plays in the opening quarter. With 8:07 left in the quarter, Holtville went on a massive 17-play, 75-yard drive that culminated with a 7-yard touchdown run from starting quarterback Jose Devoux to put the Vikings up, 6-0, with 11:17 left in the second quarter.

The score would prove to be costly for Holtville, as Devoux would leave the game with an ankle injury and watch from the sideline on crutches the rest of the way. The Vikings’ leading rusher the last two seasons finished the game with seven carries for 42 yards.

“I’d hurt the ankle earlier in the game and didn’t re-tape it before going back in,” said the Vikings’ senior captain. “Then on the touchdown, I was spinning and got hit low and my leg was planted and hurt it again.”

With Devoux out, senior Erik Garcia moved to quarterback, and running back Abraham Ramos got the bulk of the carries. Ramos finished the night with 22 carries for 120 yards.

Ramos capped a seven-play, 81-yard drive with a 54-yard touchdown sprint up the middle with 1:20 left in the half. Garcia would hit C.J. Nunez with a pass for the two-point conversion to give Holtville a 14-0 lead.

Brawley fumbled the ensuing kickoff, and Holtville’s Dorian Maize recovered at the Wildcats’ 24-yard line. One play later it was Garcia hooking up with Jonathan Heraz on a 24-yard touchdown strike to put the Vikings up 20-0 with just over a minute left in the half.

After the kickoff, Brawley had possession at its own 26-yard line and just less than a minute left until halftime. That’s when Gutierrez took control for the Wildcats. On the first play he had a six-yard run. Then the tide-turning play, saw him connect with Young on a beautiful 42-yard pass to put the Wildcats on Holtville’s 26-yard line. Gutierrez would rush for 22 yards on the next play to the Vikings’ 4-yard line.

With four seconds left, Jayden Figueroa punched it in from the 4-yard line for Brawley and Jorge Haro’s extra-point kick made it 20-7 the halftime horn sounded.

With 4:32 left in the third quarter, Brawley narrowed the gap to 20-15 thanks to a 15-yard run from Figueroa after he picked up an errant option pitch from Gutierrez.

Next up for the Wildcats is their Imperial Valley League opener against Southwest High of El Centro, scheduled for 7 p.m. Friday, March 19, at Warne Field in Brawley. Holtville travels to Imperial for another cross-league matchup, also at 7 p.m. March 19 for the annual Imperial Valley Classic rivalry game.