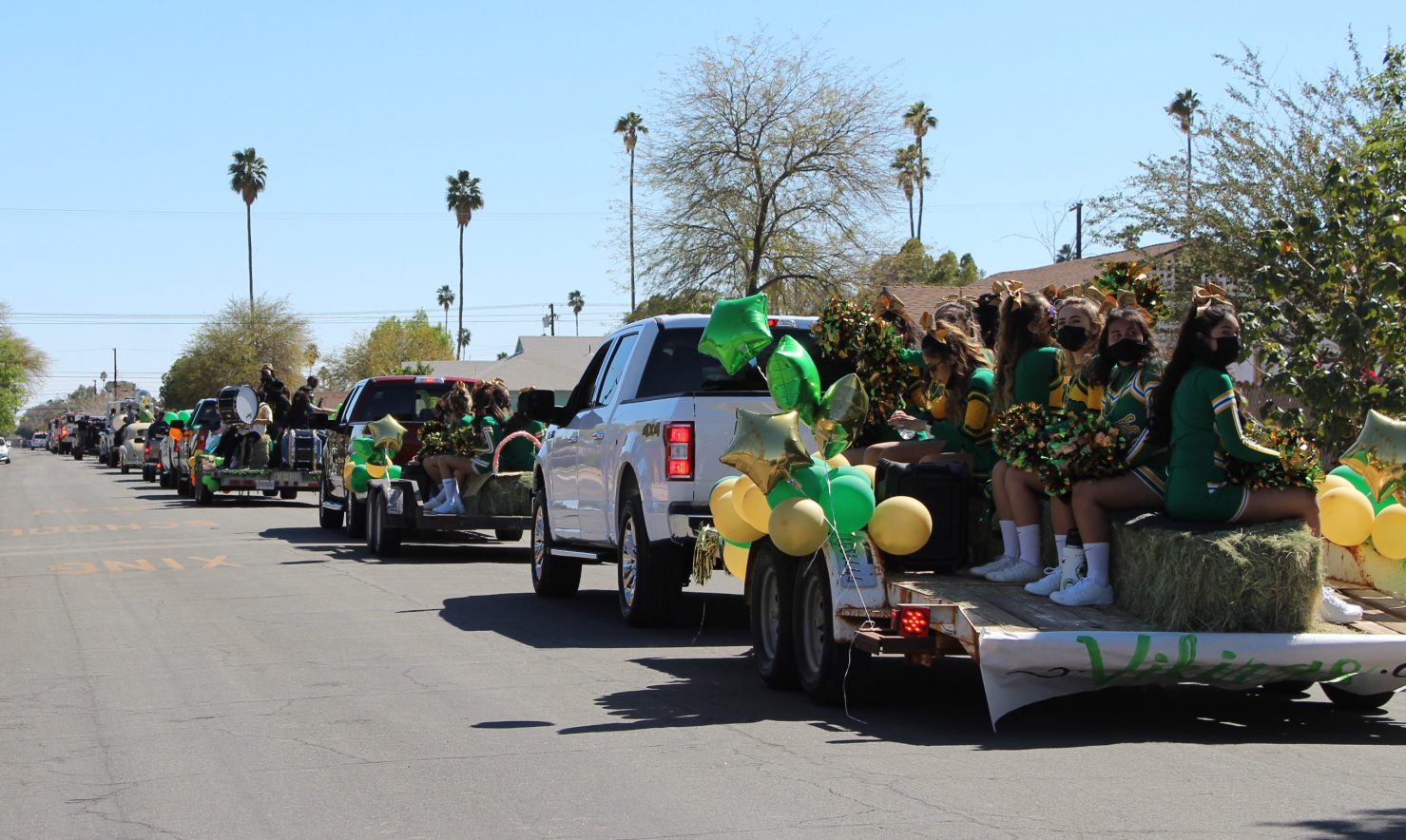 The length of the “Carrot-Van” mini parade and caravan brought a bit of the familiarity of Carrot Festival parades of the past that was missing in this COVID-impacted year. The Saturday morning, March 13, event led to the farmers’ market at Samaha Park. | CATHI PHILLIPS LARIOS PHOTO
Home
Featured Stories
In Featured StoriesLocal News

HOLTVILLE — Residents were able to enjoy the “Carrot-Van” parade from the comfort of their front lawns here on Saturday morning, March 13.

The caravan was hosted by the Holtville Chamber of Commerce and the city of Holtville as a way of bringing the city’s annual Carrot-themed festivities to residents while adhering to COVID-related restrictions, Holtville chamber executive manager Rosie Allegranza explained.

“I think we all needed this for our own mental wellbeing,” Allegranza said. “It’s just a great lift for Holtville.”

The Carrot-Van travelled from Beale Avenue to Olive Road, and then left until West Eighth Street. It travelled back to Beale Avenue until it turned right down West Seventh Street. It turned left near Holtville High School, travelling on Olive Avenue, until reaching Sixth Street. The parade then turned right on Chestnut Avenue before turning another right on East Fifth Street. The caravan parade ended by coming up Holt Avenue and ending near Seventh Street.

“I think it went well, I was surprised to see all the participants,” Allegranza said. “There were a lot of entries and it was pretty long.”

The Carrot-Van was made up of Holtville residents, including members of the American Legion, and its auxiliary, Bradley-Keffer Post 138 of Holtville. Several members waved to the community while sitting in the organization’s truck and trailer bed during the caravan parade.

Members of the Sheriff’s Office were also featured during the caravan with three of their patrol vehicles traveling behind two Holtville fire engines.

District 5 Imperial County Supervisor Raymond Castillo, who represents the Holtville area, also participated in the morning caravan as he waved to the community from his truck.

“Castillo is always involved with Holtville, and he represents us so well. We are very happy and honored to have him in our Carrot-Van,” Allegranza said.

Holtville Mayor Mike Goodsell also travelled alongside the parade, stopping on various streets to announce each passing car and float within the parade.

A tan Chevrolet Impala convertible chauffeured members of the 2020 Carrot Festival royal court through the parade, with Queen Alexis Piper, Princess Lexee Roeseler and Junior Princess Brytni Valenzuela waving from the back seat.

Members of the Holtville-based Highline Cooling Co. also participated in the Carrot-Van, as they showcased some of their fresh produce hauled in a double-trailer-long float, which carried a tractor and a mini water fountain surrounded by several heads of broccoli, lettuce, radishes, cabbages, and carrots.

Showing their city pride were members of the Holtville High School cheerleading team, who waved and cheered to residents from the back of their two trailer bed floats during the parade. Later that night, the cheerleader would perform at the home-opening football game at Birger Field.

Members of the organization Friends of Holtville also waved to residents as they travelled down the parade with a float dedicated to members of the Verde 4-H Club travelling just behind them.

Students from the high school and middle schools’ drumlines also performed for residents within their respective floats as they travelled down each neighborhood.

“My son is in the Holtville Middle School drumline band and my sobrino (nephew) is performing for the High School band,” Holtville resident Augustina Flores said as she waited for the Carrot-Van to reach her and her daughter on East Seventh Street. “We wanted to come out and watch them.”

While the pandemic has kept Flores’ family indoors for several months now, she was happy to have the Carrot-Van be something to which her family can look forward.

“I think this is good, everyone is still remaining distant, and everyone has their masks on,” Flores said.

Holtville native Pam Thompson was also excited to watch the parade with her daughter and five grandchildren. They made sure to watch it pass by twice.

“This has been good, we need more stuff like this in Holtville,” Thompson said as she walked her family to the corner of East Eighth Street and Holt Avenue to watch the Carrot-Van pass. They all then walked back to their house to catch the caravan parade again as it passed their own home on East Seventh Street.

“The Carrot Festival is a Holtville tradition and since we weren’t able to have it, this has been great, especially for the kids.”

Holtville resident Gloria Mendez was also happy to see the Carrot-Van pass in front of her home, Saturday morning.

“It woke me up, but I’m happy they did it,” Mendez said as she carried her daughter into her front yard on Holt Avenue to watch. “It’s my daughter’s first time actually seeing the parade like this, so I’m happy she can see it because she likes the music and everything.”

Mendez stepped outside her home to see the Carrot-Van after hearing the sirens for the Fire Department’s engines as they travelled down East Eighth Street announcing the parade. She also said the event was a nice way of socializing in the community while remaining conscious of the pandemic.

The Carrot-Van ended in front of Ralph Samaha Park on Holt Avenue, where the city’s Farmers’ Market was set to kick off following the mini parade.

For anyone who might have missed the Carrot-Van parade, the Holtville Chamber of Commerce has recording available on its Facebook page.