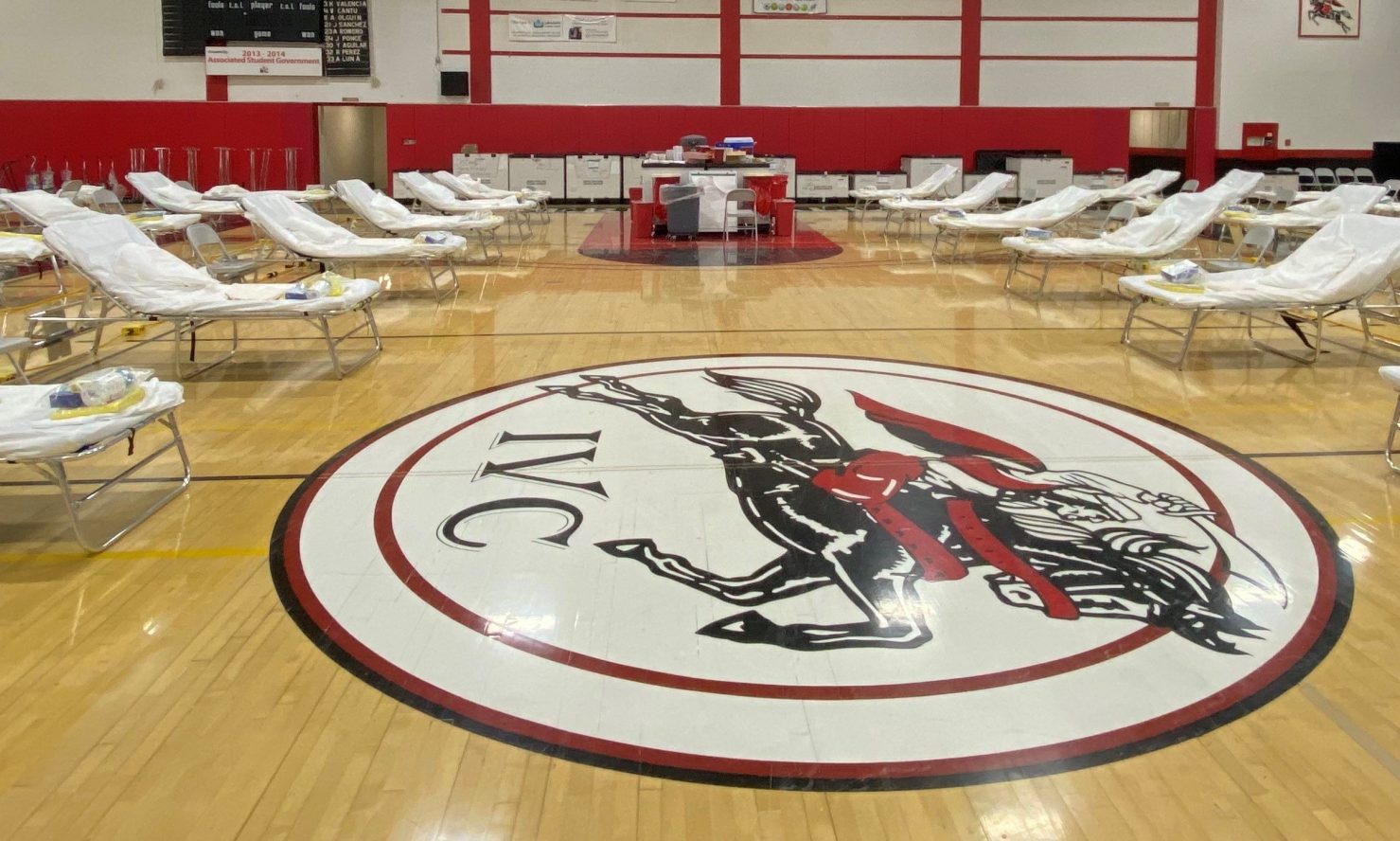 The Imperial Valley College Arabs mascot is prominently featured on the gym floor of the DePaoli Sports Complex in this 2020 photo showing the state’s Alternate Care Site at the height of the COVID pandemic. On Wednesday night, March 17, the IVC board voted to retire the Arabs mascot and start a search for its replacement. | COURTESY PHOTO
Home
Education
In EducationFeatured Stories

IMPERIAL — Imperial Valley College mascot Omar the Arab will be retired and replaced after having represented the campus for 80 years, with the last 20 years of that span having been spent largely in obscurity.

The mascot’s inconspicuous presence was largely owed to the campus community’s dissatisfaction with the Arabs mascot and its perceived offensiveness, as a variety of campus officials and students recently made clear.

The decision to retire and replace the Arabs mascot was prompted by the recommendation of an IVC task force charged with determining the campus and wider community’s satisfaction with the mascot.

The recommendation of the IVC Mascot and Identity Task Force went before the Imperial Community College District board, which on Wednesday, March 17, voted unanimously to approve the resolution.

“This is a historic moment that we can all be a part of,” Associated Students Government president and task force member Jorge Silva told the board during a presentation that preceded the trustees’ vote.

With the board’s vote to retire the Arabs mascot, the ASG will start the lengthy and inclusive process of soliciting the public’s input, as well as artists’ submissions, to identify a possible alternative, Silva said.

That process will closely reflect the methods the task force employed to gather feedback from the public regarding its satisfaction with the Arabs mascot, which included a survey, town hall meetings and social media campaign.

“We are going to follow similar steps to make sure the new mascot is representative of the community,” Silva said.

IVC Academic Senate president and task force member Rick Epps also called the possibility of changing the Arabs mascot nothing less than historic during the task force’s presentation to the board.

While acknowledging that it may be difficult to let go of tradition, Epps said that others in similar positions have done so and have emerged as stronger proponents of diversity and inclusiveness as a result.

“We’re at a point where we have a very unique opportunity to enact a legacy change for our college,” Epps said. “A change that is long overdue.”

Support for the rebranding of the Arabs mascot has come from outside the county, too.

A previous conversation that Epps said he had with California Community Colleges Chancellor Eloy Oakley indicated the chancellor expressed displeasure with the Arabs mascot not long after his hiring in 2016.

“Chancellor Oakley asked right away, ‘When are you going to change the mascot,’” Epps told the board and the dozens who had participated in the board’s virtual meeting.

In advance of his vote to approve the resolution, Trustee Rom Medina thanked the ASG for leading the most current effort to reconsider the Arabs mascot.

In 2004, a similar effort was undertaken by the ASG, which then brought its recommendation for a new mascot, as well as artistic renderings, to the board without its prior consent, Medina said.

While praising the current ASG for being more inclusive of the community’s opinions this time around, he suggested that a greater effort should be made to seek a larger amount of public input going forward.

“I want to make sure we’re inclusive to the general community,” Medina said.

Past and Present Survey Results

The effort to consider a rebranding of the college’s mascot was led by the Associated Students Government, prompting the formation of the task force in the late summer of 2020.

The ASG had led a similar effort in 2014, when a survey of 617 students and 73 employees determined that a slight majority of employees, 58 percent, were in support of replacing the mascot. A similar majority of students, 57 percent, were opposed to such a change. At the time, the student board ultimately decided not to recommend to the board a rebranding of the mascot.

Since then, student opinion seems to have shifted in favor of replacing the mascot. Of the 755 current students who were among the 2,569 total individuals who responded to an online survey in the fall, about 58 percent expressed some level of dissatisfaction with the Arabs mascot, compared to the 41 percent who expressed some level of satisfaction.

When those same students were asked whether they felt the Arab is an appropriate mascot for the campus, nearly 67 percent stated no, while nearly 34 percent were in approval, the task force’s 30-page survey report stated.

During the last of the task force’s virtual town hall meetings on March 10, IVC alumni, former assistant coach and student athlete Troy Loaiza said there was nothing wrong with the Arabs mascot and that he was proud of representing it while participating in competitive sports.

Loaiza also expressed skepticism about whether the recent survey results were representative of the college campus as a whole and was critical of the ASG’s latest efforts, which he called misguided.

“I don’t see why every so often the new (ASG) wants to change the mascot,” Loaiza said. “There is a lot of other changes at IVC that should take place other than the mascot.”

About twice as many respondents (55 percent) stated they did not consider the Arabs mascot as being appropriate compared to those who did think so (26 percent), while 19 percent indicated that they felt indifferent about the matter.

Faculty and staff made up the third group of survey respondents and totaled 169. They by far had expressed the greatest level (68 percent) of some dissatisfaction with the Arabs mascot, compared to the 32 percent who revealed they were satisfied to some degree.

“Overall, we are really happy, and we feel that the survey results are representative of the Imperial Valley as a whole,” said Jose Carrillo, IVC director of Institutional Research and task force member, during the March 10 town hall meeting.

During the town hall, about an equal number of individuals expressed support and opposition to the potential mascot rebranding. Those speaking in support of the current mascot appear to have been the first to have publicly voiced such opinions during the information gathering process.

Sophomore Marlon Munguia said the fact that no resounding majority of survey respondents considered the Arabs mascot inappropriate should give the campus pause.

Munguia also highlighted the culture that those of Arabian and Mexican descent have in common and which traces its origins to the Moors’ past conquest of Spain and its colonization of the Americas.

Instead of simply replacing the Arabs mascot, why not make more of an effort to promote it and, by extension, Arabic culture, Munguia asked.

“We shouldn’t just throw away everything and just leave nothing,” he said. “Because that’s not really going to do any good, and it’s just going to lead us to be more divided as a campus.”

Similarly, IVC alumni Lucero Flores said that as someone of Mexican heritage, she, too, identifies with Arabic culture and that culture’s strong association with the desert.

The idea of potentially replacing the mascot did not sit well with Lucero, who said people need to be educated more about and accepting of other world cultures.

Nor can the current Arabs mascot hardly be considered offensive, with its depiction of an Arabian warrior replete in traditional garb, raising a scimitar while astride a galloping horse, she said.

“We should keep it,” Flores said. “If anything, we should actually advertise it more.”

IVC maintenance director Rick Webster said the Arabs mascot did not appear to be much a concern on campus until after 9/11, when the image of the mascot was removed from the campus gymnasium’s floor and wall at the urging of the then-athletic director.

The eventual reapplication of the logos on the gym floor and wall several years later also seem to suggest that the campus no longer has concerns about its impropriety, Webster said.

What should be more offensive to the campus community, he said, is the prevalent use in official IVC announcements of the triangular-shaped stone that is decorated with the campus’ logo and situated near the roundabout of the parking lot that is adjacent to Aten Road.

“For about 20 years we were represented by a rock,” Webster said.

A better option might be to keep the current mascot logo but change the name to Desert Warriors, he said.

“You got to have room for compromise,” Webster said. “I think you guys need to consider both sides of this argument.”

The impassioned pleas of the Arabs’ supporters aside, it does appear that support for the current mascot is not as widely shared.

When survey respondents were asked directly if they would like to see a change in the Arabs mascot, 74 percent of current students, 66 percent of alumni and community members and 78 percent of faculty and staff responded yes.

History of the Arabs Mascot

The first known public reference of the Arabs mascot appeared in the 1941 edition of the campus’ now defunct yearbook, called “The Painted Desert.”

Previously, a 1926 edition of the yearbook had referred to the basketball team as the Imperial “Outlaws.”

By 1941, the campus had alternately referred to its sports teams as “Arabs” and “Nomads,” according to an ASG newsletter that was created and shared with the IVC board as part of ASG’s consideration of a mascot change in 2014.

Imagery associated with the mascot at the time had portrayed him riding a camel instead of a horse.

“There is no evidence as to how exactly the Arab came to be IVC’s mascot, much less as to how Omar became its name other than the fact that the desert of Imperial Valley, along with its scorching heat, closely resembles the deserts of the Middle East,” the 2014 ASG newsletter stated.

Previous
Mourners at 115 and Norrish Seek Permanent Tribute for Dead