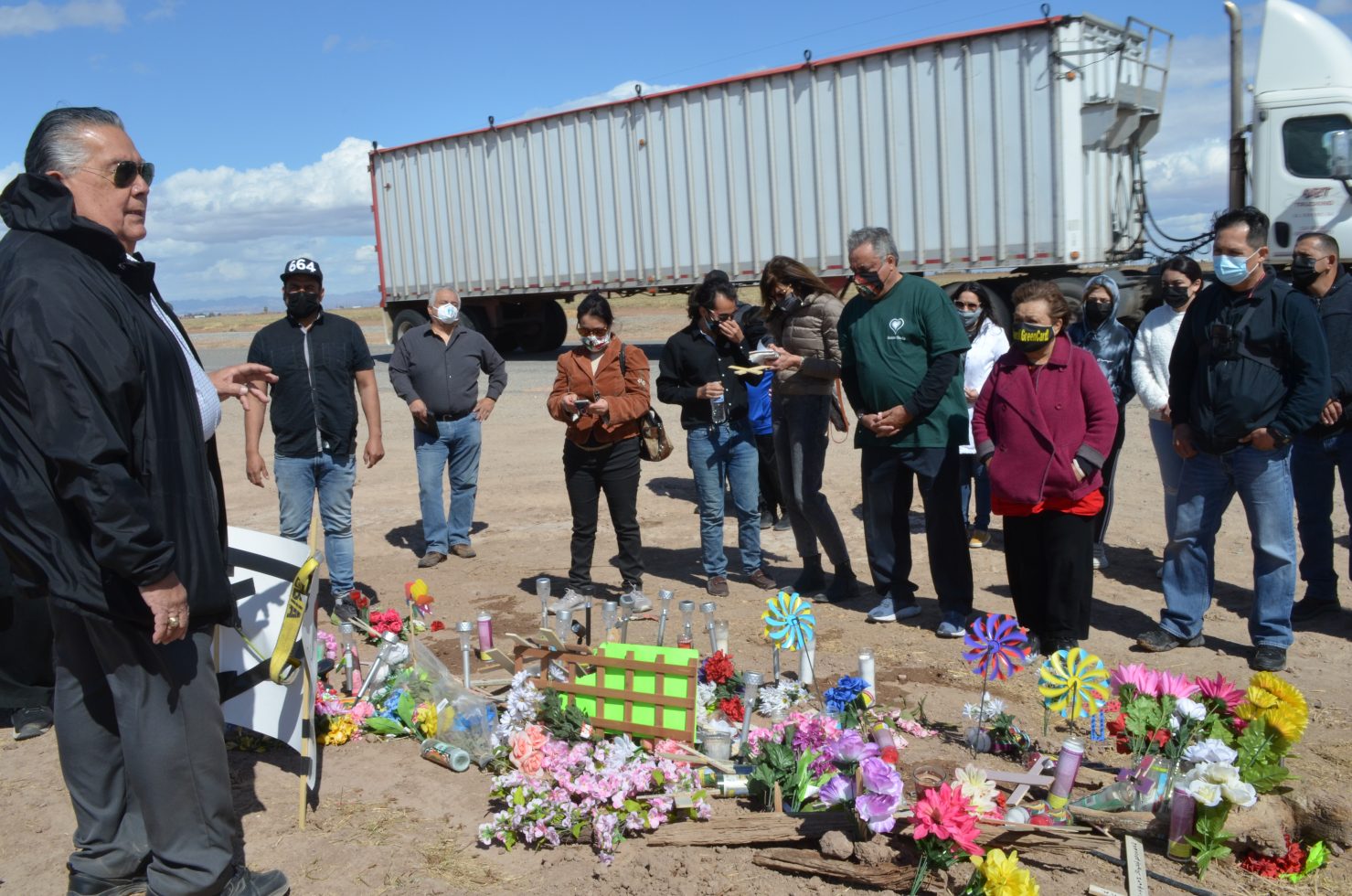 Mourners at 115 and Norrish Seek Permanent Tribute for Dead

(This story was updated at 2 p.m. Friday, March 19, with additional information from the California Department of Transportation.)

HOLTVILLE — As news helicopters hovered overhead and forensic crash scene investigators continued to comb through the wreckage at the site of the horrific collision that killed 13 Mexican and Guatemalan immigrants, Hugo Castro was there with his box full of crosses.

Memorialized on the cover of the Los Angeles Times the day after the tragic March 2 crash northwest of Holtville, Castro was the first to show up at the site shortly after noon and place crosses on nearly every corner of Highway 115 and Norrish Road, that is, until a California Highway Patrol officer asked him to stop due to the ongoing investigation.

Castro, a long-known immigrants’ rights activist through his former work with Border Angels, and then his own SOS Migrantes, made what only could be described as a pilgrimage to the site that first day.

“I had to go as soon as I could. I took my box of crosses and I started putting them in place, and I was just praying,” Castro said.

In doing so, he planted the handmade crosses at each corner and recited verses from Bible and words of comfort for the dead and injured into the evening, where news photographers from within driving distance captured images of Castro placing and carrying the crosses made by immigrants and stored at his brother’s apartment in Calexico.

And what has followed in the more than two weeks since the fatal collision has been an outpouring of tributes at the intersection, in flowers, crosses, handwritten messages, and the continued gathering of individuals and groups to mourn.

Yet now, as immigration reform advocates and others are learning that these makeshift memorials are to be short-lived, a movement is forming to make these remembrances a permanent fixture amid a warning from the state Department of Transportation that the time has come to clean up the corners of this state arterial.

A Caltrans spokesperson this week said that the memorials have been “tagged for removal by maintenance crews over the next couple of weeks.”

“There are many ways to memorialize individuals on the state highway system. Highways can be named by legislation or can be adopted in memory through the Adopt-a-Highway program,” stated Cathryne Bruce-Johnson, a Caltrans public information officer.

“This would not include a permanent monument,” she wrote in an emailed statement.

That news did not sit well with any of the social justice advocates interviewed, a couple of whom said they would seek immediate assistance from local, state, and federal politicians.

Castro, however, was not as diplomatic is his response.

“They can remove it, but we’re going to continue doing it,” Castro said. “We are already not respected, even after death. This is about dignity, this is about justice, this is about humanity.”

For Castro and others, the memorials and the nature of the deaths of the 13 involved in the wreck and the 12 others injured, carry with it the freight of immigration reform.

Enrique Morones, the former leader of Border Angels who is now heavily involved in faith-based advocacy for humane immigration reform through his Gente Unida, plans to enlist the help of Imperial County Supervisor Ray Castillo and “his friend,” U.S. Congressman Juan Vargas, to intervene and stop the memorials from being removed.

“It’s important to have this. I’m going to propose through Ray Castillo or Juan Vargas to make a permanent memorial and let the local people decide what that is,” he explained.

Morones first held a vigil at the site at midday Wednesday, March 10, was to return on March 17 with Castillo and others. The Norrish and 115 vigil is part of a weekly Wednesday vigil Morones and Gente Unida has organized since Jan. 20, when he said President Joe Biden announced he would work to get humane immigration reform passed within the first 100 days of his presidency. Until March 10, those vigils took place at colorful Chicano Park, in the Barrio Logan section of San Diego, beneath the brightly painted murals.

For Calexico City Council member Raul Ureña, he, too, finds Caltrans’ planned actions unconscionable, and he, too, plans to seek remedy through legislators.

“We’re still at a stage where we can talk to Caltrans and try to establish a more permanent memorial, not some Adopt-a-Highway,” Ureña said.

Since it is a state agency and a state roadway, Ureña said the best solution would be to get the help of Assembly member Eduardo Garcia to call off Caltrans and seek a more permanent tribute.

Morones and Castro want to continue to establish vigils at the site for the immediate future, something that Ureña doesn’t see as necessary.

“Maybe not attending vigils, but religiously getting together our representatives at every level, that’s the action that I see,” he said.

For Morones, this is personal, simply because of his long relationship with championing the memory of forgotten immigrants who have died crossing the border.

Although he is a San Diego native, Morones feels a close kinship with the Valley, and especially Holtville, where for 20 years he brought Border Angels and other religious and human rights organizers to mourn the many unnamed immigrants buried in the rear section of Terrace Park Cemetery, Imperial County’s indigent burial ground, or its Potter’s Field.

On Wednesday, March 17, Morones said he would be mourning all immigrants killed on their journey northward, not just the 13 who died March 2. He also planned to remember the eight Mexican nationals killed in the Texas border city of Del Rio on Monday, March 15, and possibly others killed in San Diego recently who may or may not have been immigrants, he said.

“If you had humane immigration reform, these people wouldn’t be dead,” Morones said. “They’re forgotten, but they are just as important as anybody else.”

From the Caltrans spokesperson Cathryne Bruce-Johnson:

“Our hearts go out to the families who have lost loved ones and to the community. For safety reasons, we need to remove informal roadside memorials since they can contribute to driver distraction, impede roadside maintenance activities, and even place visitors of the roadside memorial in danger. Caltrans will work with family, community members and the appropriate legislative representatives who wish to establish a ‘formal’ memorial.

“Caltrans generally does not have contact information in these situations so notification before removal is not always possible. However, reasonable care is taken in their removal, and Caltrans will hold these items at the closest maintenance station for up to 30 days.

Makeshift memorials created by mourners of the 13 dead Mexican and Guatemalan immigrants killed on March 2 — and for others who have died in prior accidents — at Highway 115 and Norrish Road northwest of Holtville dot the four corners of the intersection. The California Department of Transportation has scheduled maintenance crews to cleanup to memorials, and activists are not happy, saying a permanent tribute needs to be on the site. | CATHI PHILLIPS LARIOS PHOTOS

Next
IVC Axes Arabs Mascot, Students to ID New One