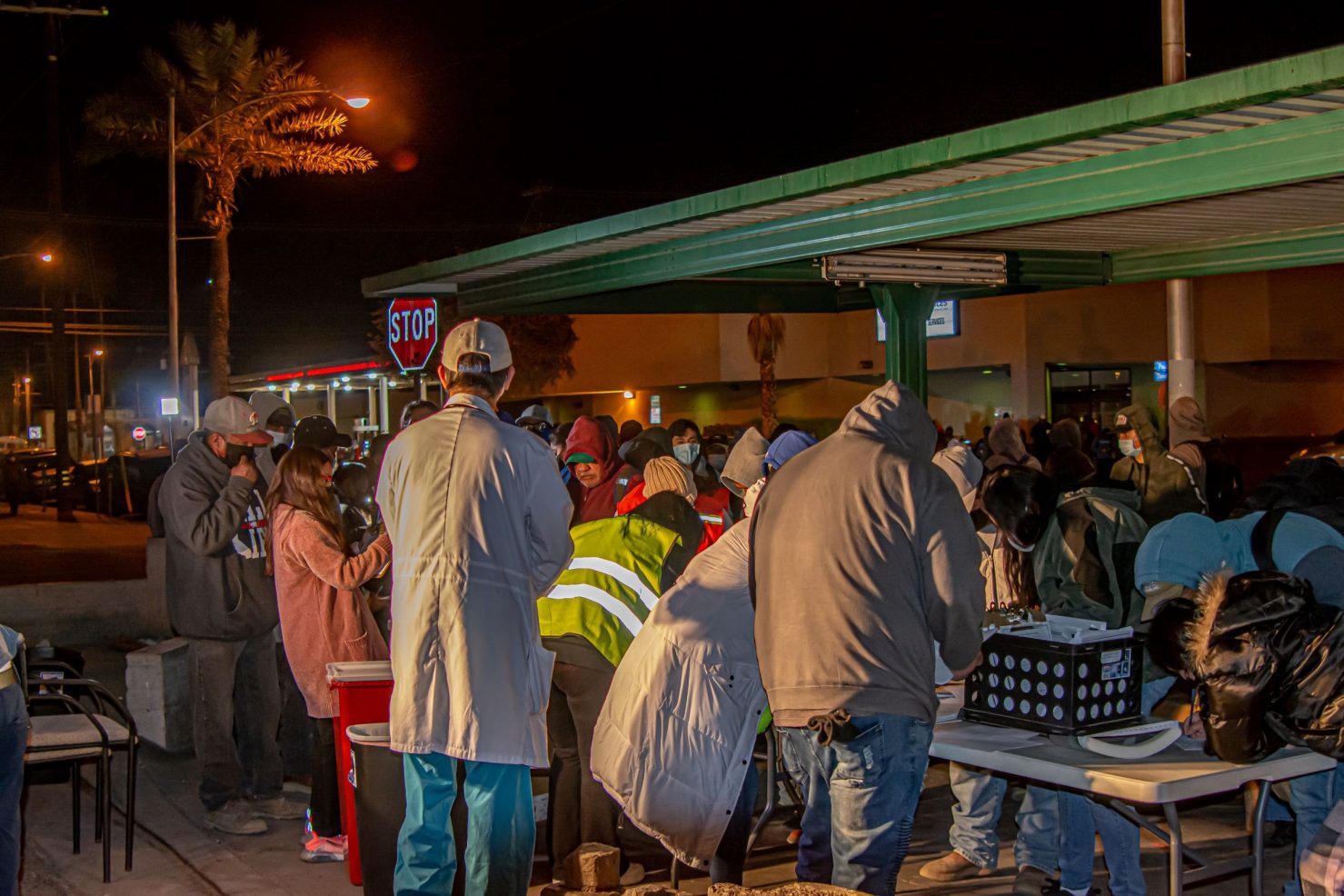 Dr. Tien Vo (to the left, facing crowd in blue pants) looks over a crowd of a couple hundred farmworkers who gathered at a mobile COVID-19 testing and vaccine clinic behind the bus stop on Third Street near Donut Ave in downtown Calexico after 3 a.m. Friday, March 12. | CAMILO GARCIA JR. PHOTO
Home
COVID-19
In COVID-19Regional News

As much of the Imperial Valley slept, the staff of Dr. Tien Vo’s health centers arrived in downtown Calexico in the middle of the night on Friday, March 12, to stage a pop-up COVID-19 testing and vaccination clinic aimed specifically at farm laborers, the first of what Vo hopes will be many opportunities for “Muhammad to go to the mountain.”

At the request of Calexico City Council member Raul Ureña, the physician and his staff started setting up around 2 a.m. on Third Street near Donut Ave to test and vaccinate the farm labor population right where it congregates as hundreds of workers wait for contract labor buses to pick them up for a day in the fields.

“Farmworkers in the Valley are really forgotten. They work and go home, and really have no life,” said Dr. Vo during an interview with this newspaper.

“It’s amazing. There was a 38-year-old man there who had never been to a doctor before,” he said in recalling the event that, frankly, caught him and his staff off guard.

With just enough supplies to test about 100 people and vaccinate 80, Vo said he was overwhelmed when about 300 farmworkers gathered around their mobile clinic behind the nearby bus stop on Third Street starting at 3 a.m.

“There was not enough vaccines to give out,” he said.

Vaccinating farmworkers and other agriculture-related employees and food workers has become an emphasis in Imperial County since Gov. Gavin Newsom began to preach health equity and the vaccinating of disproportionately neglected groups.

Recently, the Imperial County Public Health Department has begun to take its mobile vaccination teams to farmworkers, traveling to ag companies and administering the vaccine there, and two mass vaccination clinics have been held at Imperial Valley College for ag and food workers.

But Imperial County has a long way to go to inoculate its farmworkers, and it has gotten a late start compared to other ag-centric areas of the state, including nearby Riverside County’s Coachella Valley.

Although Imperial County is home to an estimated 10,000-plus seasonal and permanent ag workers, the first intentional vaccination of field laborers didn’t happen until Salud Sin Fronteras, a coalition of social justice groups focusing on farmworker health initiatives, collaborated with the owners of El Centro’s Desert Pharmacy on Feb. 22 to vaccinate about 20 workers.

Farmworker and immigration advocate Hugo Castro, who lives at and basically runs the nearby temporary farmworker encampment at Andrade Avenue and First Street, admires what Vo is doing to bring medical services to the source.

“It was finally on Friday (March 12) when I felt like it was a respectful action,” Castro said, referring to the treatment of farmworkers.

A member of Salud Sin Fronteras and a son and grandson of braceros, Castro sees that farmworkers in the Imperial Valley, and throughout the state, are far too often marginalized.

He said Vo was a rare exception.

“Vo listens and advises … They were humble enough to come and listen to the farmworkers,” Castro said.

On Friday, Dr. Vo and staff listened, advised, educated, and did more than what they had intended to do, according to both Vo and council member Ureña.

“Many of them (farmworkers) really don’t know anything about COVID and vaccines. I came in to talk to them, and I gave them educational training, in Spanish of course, and to talk about testing,” Vo said.

Although Vo’s main focus is on the testing and vaccinating of the farmworkers, Friday’s pop-up took on an added mission of treating the ailments of some laborers who have never been to a doctor, or don’t seek regular medical care through an empathetic provider.

Ureña told the story of a farmworker who attended the event who was clearly a senior citizen and suffering the effects of diabetes. Walking on a cane and presenting a swollen and painful foot, Ureña said he pulled Vo aside and asked him to help the elder laborer.

“His previous doctor didn’t sign off on his disability,” the council member said, referring to disability insurance the farmworker had sought for his condition. “I said to Vo, look at this man. … and Vo told him to come to his office (a few days later).”

While Ureña was pleased to see what Vo was doing, he said it was providing this kind of direct access to healthcare services — not just for COVID-related matters, but issues like diabetes and obesity — that should be the model of delivery moving forward.

The council member, who was also instrumental in helping establish the farmworker encampment and was on the losing end of a fight with the balance of his city council to not sell the land on which the camp now sits, said other healthcare providers who want to come to Calexico should follow Vo’s lead.

He referenced recent overtures by fellow council member Gloria Romo and her reaching out to El Centro Regional Medical Center to organize a vaccine clinic in Calexico. Ureña believes those types of events need to come to the neediest, rather than the opposite. To that end, Ureña said he recently spoke to Calexico’s city manager about coaxing others to the same site as Vo’s pop-up.

Meanwhile, Vo has big plans to take his mobile clinic to farmworkers all over the Valley, with large supplies of vaccine in tow.

Much of that work is being done through his contracts and grant funding with Calexico’s Heffernan Memorial Healthcare District and the statewide Housing for the Harvest program he is part of through the Imperial County Social Services Department, which is currently finalizing a contract with Vo that should go to the Imperial County Board of Supervisors for approval.

On Friday, for instance, Vo said as long as the farmworkers who attended had a U.S. Social Security number, he was able to treat, test, or vaccinate them using a combination of funding methods. If they didn’t have insurance, he utilized the Heffernan grant to treat the uninsured in Calexico, he said. If some patients needed services above medical treatment, but related to COVID, they were referred to Housing for the Harvest program.

What’s more, Vo said he is in the final stages of contracting with Blue Shield as a provider, which he said should give him a wide-open pipeline to vaccine in the thousands of doses per week, he claimed.

Blue Shield is also going to be the state’s third-party administrator in providing vaccine directly to providers, so county Public Health will not be the agency doling out doses.

Just like Vo was the first person in the Valley to find some sort of main vein to access PCR swab testing kits in the early days of the pandemic, the physician believes he will have similar supplies of the vaccine.

In the meantime, Vo said he and his wife have been traveling throughout the Valley in recent weeks, scouting locations for more pop-up clinics for farmworkers and other qualifying disadvantaged groups.

Recently, he to the flower fields off Lack Road in Westmorland to see both the flowers and the farmworkers. He’s already done smaller-scale pop-ups in Westmorland, Calipatria, and Niland through the Housing for the Harvest program through his nonprofit Vo Neighborhood Medical Clinic.

He was due to be in Holtville on Thursday, for a small clinic at the Turning Point Ministries parking lot with 150 doses of Pfizer-BioNTech vaccine.