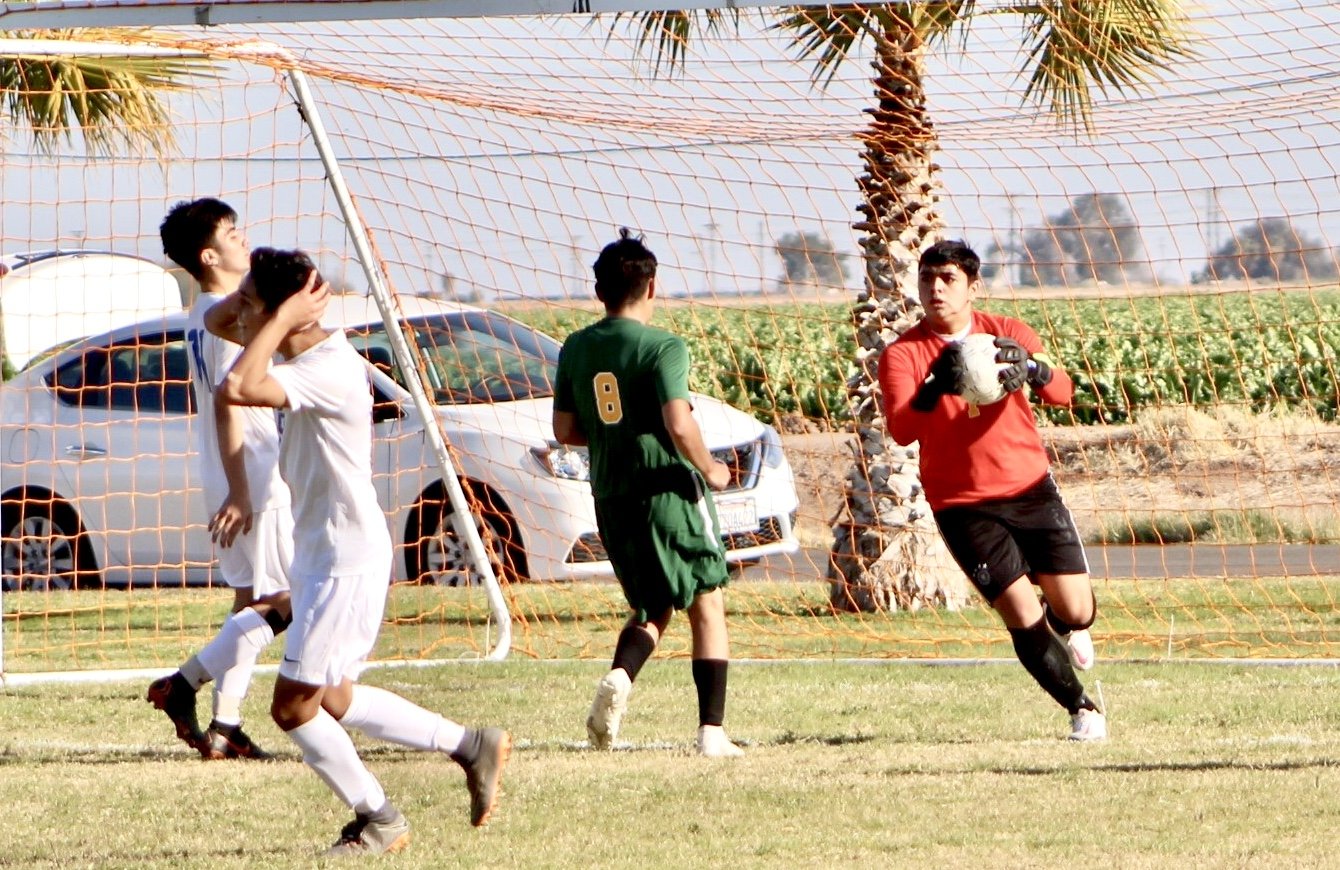 Holtville High School freshman Bryan Padilla makes one of his 11 saves during the Vikings’ 2-1 victory over Brawley Union during a nonleague game in Holtville on Thursday, March 18. | CATHI PHILLIPS LARIOS PHOTO
Home
Sports
In Sports

HOLTVILLE — With more than 20 years of coaching experience, even Holtville High School boys’ soccer head coach Juan Arroyo has been thrown for a loop in this COVID-shortened season.

Soccer, normally a winter sport in a traditional school year, was cleared to begin practice in late February. With only four returning players, Arroyo knew he was going to do a lot of adjustments on the fly with inexperienced players and little prep time.

In Holtville’s season-opener against Brawley Union High on Thursday, March 18, Arroyo started the game with some players out of position and had to make some quick changes. The moves paid off as the Vikings beat the Wildcats, 2-1, in a nonleague matchup.

“I have a lot of new kids and we are still trying to figure out the different positions they will be stronger at,” Arroyo said. “That probably cost us the first goal.”

Brawley jumped on top, 1-0, with a seventh-minute goal from Nathan Urbano, with an assist from Alfredo Valadez.

The Vikings were able to tie the game, 1-1, late in the first half with a goal from senior Rodrigo Villareal off an assist from senior Joel Gil.

Holtville goalkeeper Bryan Padilla, just a freshman, was able to shut out the Wildcats in the second half and finished the game with 11 saves.

“He (Padilla) has good height and he has all the instincts to be a fantastic goalkeeper,” Arroyo said. “He made the difference for us. Brawley had a lot of chances to score but he was able to make the saves when we needed them.”

With about 15 minutes left in the game, Villareal was able to beat the Wildcats’ goalkeeper for his second goal of the match, off an assist from senior Cesar Diaz.

Padilla was able to thwart the late attacks by Brawley and keep Holtville on top, 2-1.

This year there will be an IVL (Calexico, Central Union, Southwest, and Brawley Union) and a Desert League (Holtville, Imperial, Palo Verde of Blythe, Calipatria, and Vincent Memorial Catholic of Calexico).

Holtville’s girls’ soccer team made the trek to Warne Field in Brawley on Thursday, March 18, but came up on the short end, losing 5-1.