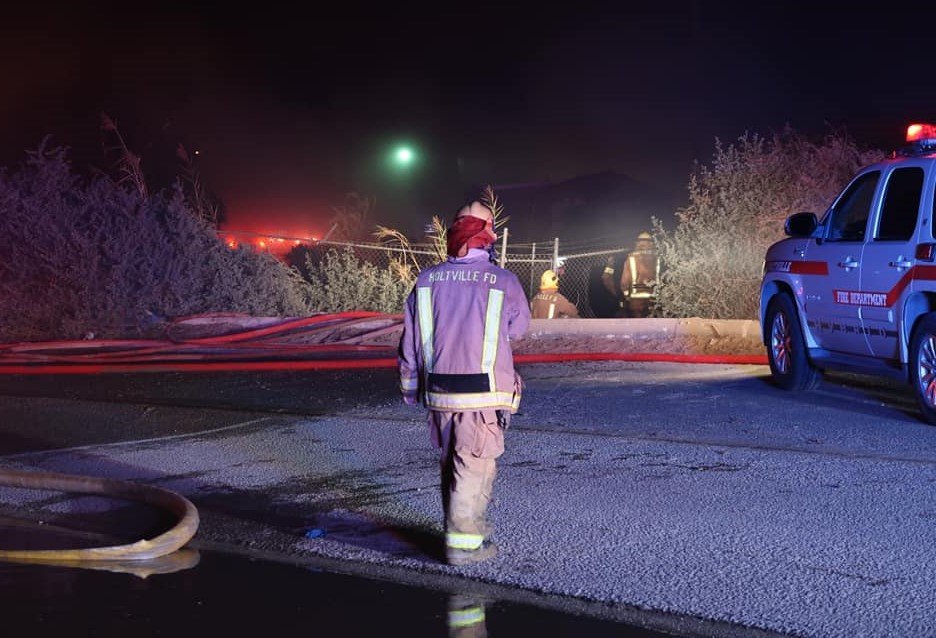 A Holtville firefighter is seen walking toward the site of a vehicle rollover and brush fire on the west side of where Bonds Corner Road turns into Walnut Avenue on the southern edge of Holtville early Saturday morning, March 20. | PRESLEY RAMIREZ PHOTO
Home
Featured Stories
In Featured StoriesPublic Safety

HOLTVILLE — Two people were pulled from the wreckage of a vehicle rollover and airlifted from the scene near where Bonds Corner Road turns into Walnut Avenue on the southern edge of Holtville in the early-morning hours of Saturday, March 20.

The two people trapped in the vehicle, a 20-year-old male and a 34-year-old female, were extricated by Holtville Fire Department crews and flown to Desert Regional Medical Center in Palm Springs from a landing site at the nearby former “Osborne Cotton Gin,” Holtville Fire Chief Alex Silva said.

A 17-year-old female was also in the vehicle, the chief said, adding that she was able to get out on her own and was transported to the hospital by family members.

The 20-year-old and the 34-year-old were both expected to have surgery on Monday, March 22, for nonlife-threatening injuries, Silva said, but both were doing well and expected to be released from the hospital on Tuesday, March 23.

The teenager was taken to El Centro Regional Medical Center by her family members after the wreck, and she was released on Sunday, March 21, Silva said on Monday.

Meanwhile, in a press release on Monday, sheriff’s Sgt. Roy Patterson, who leads the Holtville substation, stated the 20-year-old male has been identified as the driver of the car.

“An investigation is ongoing to determine the cause of the accident and no further information can be released at this time,” he stated.

It was not known whether alcohol was a factor in the rollover, although a first-responder source at the rollover scene said it was a “good assumption it was.”

Before the release was distributed, sheriff’s Chief Deputy Robert Benavidez said the driver had been extricated from the vehicle and flown to Desert Regional before deputies had a chance to determine whether alcohol was involved.

However, “We did request a search warrant for toxicology for blood results, but that will outstanding for four to six weeks,” Benavidez said.

The vehicle, believed to be either a Chevy Camaro or a Ford Mustang, Silva said on Saturday, went through a fence and into what the chief described as a water reservoir on the west side of the roadway, catching fire and igniting overgrown brush in the area.

At some point between the time of the 1:35 a.m. call and the occupants of the vehicle being rescued, a third alarm was sounded as windy conditions put nearby Bolthouse Farms in jeopardy, Silva said.

Bolthouse Farms is located at the southwestern intersection of Third Street and Walnut but extended south toward the crash site.

Reportedly the vehicle occupants were attending a family party in the unincorporated area of the county just south of the crash site. Apparently, according to a first-responder source, family members somehow caught wind of the accident and were at the scene helping to get people out of the vehicle.

That source stated the family members, although attempting to help, hindered rescue efforts, and as a result, Imperial County Sheriff’s Office deputies had to intervene. No one immediately connected to the crash was arrested.

However, that first-responder source said another person from the party south of the crash site was cited for driving under the influence of alcohol by California Highway Patrol, which did not immediately provide information after messages were left on Saturday or Monday.

Chief Deputy Robert Benavidez told this newspaper on Saturday afternoon that in the case of the second incident, an Imperial Irrigation District worker reported a black F-150 had crashed into a canal at Bonds Corner Road, which was the vehicle headed to the rollover scene.

Benavidez said deputies suspected the driver was under the influence and passed off the call to Highway Patrol.

Chief Silva headed back out to the crash site around 9:30 a.m., where the vehicle was being removed. Photos sent to this newspaper by Silva showed the vehicle burned to the point where it was just a steel shell.

Apparently, Silva said, when the vehicle rolled, it landed upright and caught on fire, setting off the untended brush and vegetation in the area.