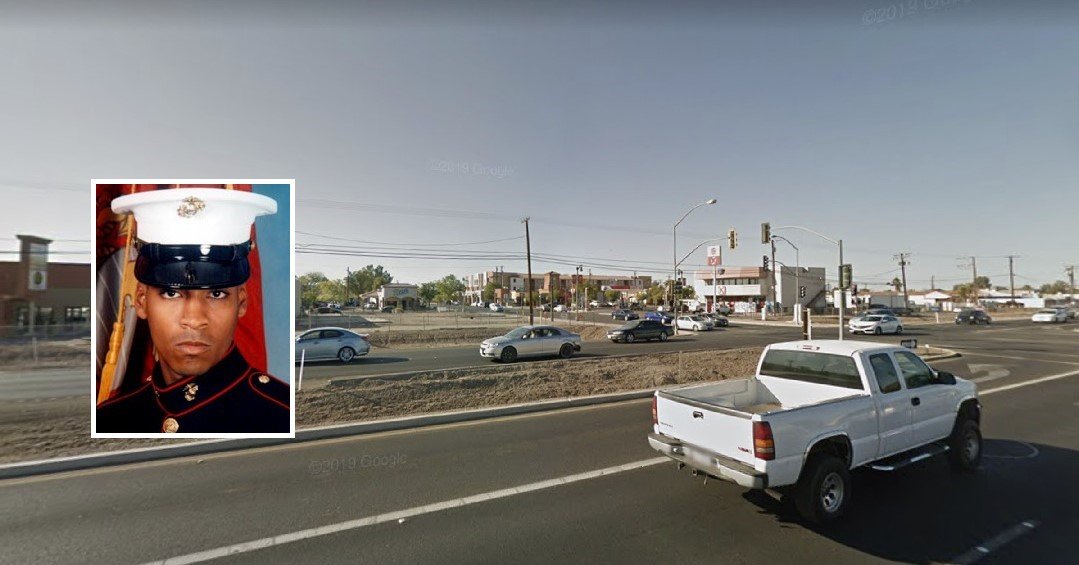 The public was updated on plans to dedicate a 3.5-mile section of Highway 86 (shown) running through the city of Imperial to fallen U.S. Marine Lance Cpl. Marcus Cherry, who died in combat during Operation Iraqi Freedom on April 6, 2004, in Ramadi, Iraq. A request for proposals on design work for Highway 86, which includes the Cherry dedication, are due to the city on April 2. | FILE IMAGES
Home
Regional News
In Regional News

IMPERIAL — When the prospect of renaming the 3.5-mile stretch of Highway 86 in Imperial came about a couple years ago, more than 380 nominations were submitted, with most of those submissions for fallen U.S. Marine Lance Cpl. Marcus Cherry.

During the City Council meeting on Wednesday, March 17, Assistant City Manager Alexis Brown revealed a majority of those submissions were for the late Cherry, who at 18 years old was killed during Operation Iraqi Freedom on April 6, 2004.

Cherry, an Imperial High School graduate and beloved football team member, died in combat in Ramadi, in the Anbar province of Iraq, less than a year after his enlistment. He was assigned to the 2nd Battalion, 4th Marines, 1st Marine Division, I Marine Expeditionary Force out of Camp Pendleton near Oceanside.

An El Centro resident had asked the council the status of the renaming process.

Brown said that although the request for nominations for the stretch of road through town was put out several years ago, the city only recently put out its request for proposals for the work on that portion of Highway 86. The proposals, which are due back to the city on April 2, are for design and engineering will include construction and landscaping plans.

Brown said there will be a groundbreaking on the portion that signifies the dedication to Cherry’s memory and service to his country as part of the process.

“I’ve been in contact with his family,” Brown said.

Gloria Brambilla, a mother of five, shared her story of making the difficult decision to leave her job of 20 years to care for her autistic child. It wasn’t an easy choice to make, but it was one made as a family.

“As a parent, you are the best and most important advocate for your child, especially if they are voiceless,” Brambilla said during the council meeting on March 17.

Since 2017, the city of Imperial has been active in declaring April as Autism Awareness Month and has supported the concept of “Light it up Blue” in support of families and loved ones who are on the autism spectrum.

The city’s proclamation serves as a platform to bring more awareness and to let others know there’s resources out there for them to utilize especially during this difficult time of schools starting to reopen.

James Gonzalez, president of the Autism Support Group of Imperial County, said his organization has been working to get more resources to the city of Imperial, for parents and for children.

In conjunction with the library renovations ongoing in the city, there will be a special section with sensory installations for children with autism and their families to feel included in the library atmosphere.

Eugenio read in the proclamation that the library installation was designed, “In the hope it will lead to a better understanding of the autism spectrum disorder, celebrating the work of the advocates, professional and family members, and all who work to build a brighter tomorrow.”

Both Brambilla and Gonzalez praised the city for their work and continued support and reminded the community that there’s resources for them to access in the county.

“We’re grateful to our educators who are struggling along with us during this distant learning. And even our respite workers, who are with my son tonight so I could be here,” Brambilla said.

As children are headed back to school in a phased fashion, the Imperial Public Library has been undergoing a makeover of its own to accommodate its growing population. The library renovations now will include a separate teen space and children’s space.

Through $44,000 that’s coming to the city through cannabis dispensary March and Ash’s conditional-use permit earmarked for youth programs and education, there will be two children’s space in the library, one designated for ages 5 to 8 and a “tween” space for ages 9 to 12.

Ember Haller, community services director, said that having the specialized spaces will enhance the library experience.

Currently the library children’s section doesn’t have seating or tables, which left the bookshelves of beige and steel feeling cold and not exactly the most inviting environment. The furnishings added to the renovation will include comfortable seating, tables, a computer station, and upgraded shelving units.

Assistant City Manager Alexis Brown noted there is not a date yet for the library to be open to the public, but the city is contacting employees so that those who desire to be vaccinated can be before the reopening.

Next
Stream N’ Chill: Good for Her, Part One