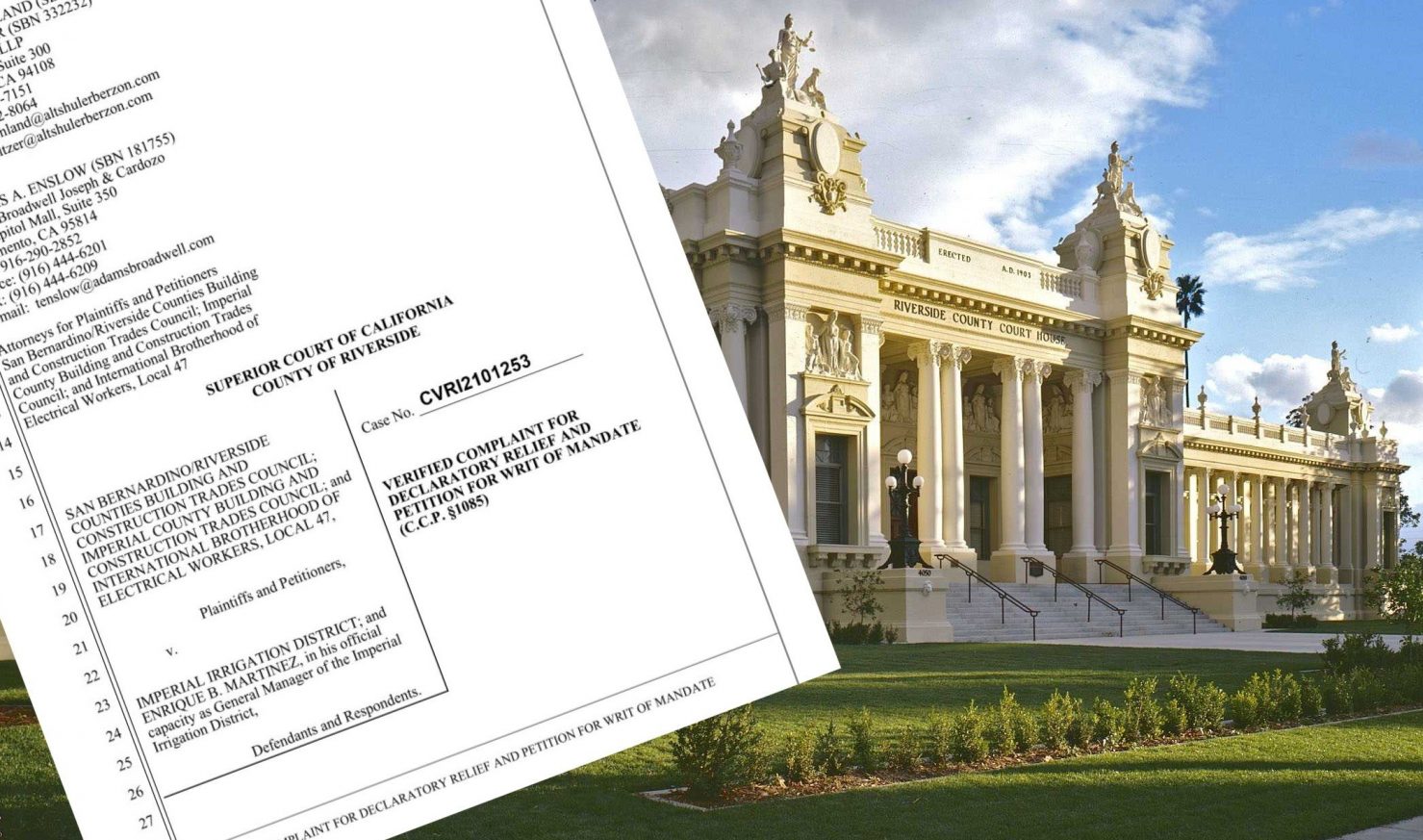 The San Bernardino/Riverside Counties Building and Construction Trade Council, Imperial County Building and Construction Trades Council, and International Brotherhood of Electrical Workers Local 47 have joined to file a petition for writ of mandate, basically asking the court to enforce a project-labor agreement between the unions and the district that the plaintiffs say is still valid.

The agreement was approved by the majority of the IID board during a meeting prior to the current board being seated in late December. The agreement was later annulled at the urging of then-newly installed Director JB Hamby.

Director Alex Cardenas, for one, said this week that he still supports his original decision.

“I clearly understood what I was voting on,” said Cardenas in an interview on Tuesday, March 23. “There was no ambiguity or vagueness in regards to my vote.”

Cardenas was referring to the rationale by which the vote was overturned, that the direction to approve the agreement in late 2020 was “ambiguous and vague.”

He added he stands for the project-labor agreement that was presented, and that he has recused himself from the district’s closed-session discussion about the suit on Monday, March 22, because he does not want to “purger” himself and he’s not going to misrepresent what he voted for.

There was no reportable action that came from Monday’s closed-session discussion.

A project-labor agreement is a pre-hiring collective-bargaining agreement with one or more labor groups that establishes employment conditions for specific construction projects.

The district’s agreement, originally voted on Dec. 1, is a 10-year agreement that covers any construction projects estimated to cost more than $750,000.

“After a year of negotiations and two public meetings, the Board of Directors for the Imperial Irrigation District voted by a 3-2 margin to approve Project Labor Agreements that cover specified District construction projects,” according to the petition. “The Project Labor Agreements were subsequently executed by representatives of the District and labor organizations and became legally binding bilateral contracts.

“Following a change in Board membership, however, the new Board of Directors attempted to change historical facts,” the document continues. “During a closed session of a special meeting, the new Board declared, by a 3-2 vote, that the Board’s prior action was so ‘vague’ that it was not ‘properly enact(ed),’ such that the Project Labor Agreement was never approved. That post hoc declaration is false.”

There was contention, even in December when the board voted 3-2 that the former board’s action was “ambiguous and vague.”

The statement was made during the Jan. 5 Board of Directors meeting while discussing the validity of action taken early in December.

At a special meeting at the end of December, IID Director JB Hamby contended the board’s action in early December was ambiguous and vague, citing board language during the Dec. 1 meeting.

“Let’s go to item 25,” Director Norma Sierra Galindo said during the earlier meeting. “Do I have a motion? I need a motion and a second. … Go ahead, (former) Director (Erik) Ortega.”

Galindo said, “You have a motion, OK. Do I have a second?”

Galindo said, “OK, so I have a motion by Director Ortega, a second by Director Cardenas. Is there any further discussion? (Former) Director (Bruce) Kuhn, anything else you’d like to add?”

Galindo said, “Director (James) Hanks, is there anything else you’d like to add?”

The petition filed in March included three declarations from Cardenas, Ortega, and Galindo stating they understood the vote they took in December was in favor of the project-labor agreement.

The petition asks the court to declare the agreements as valid and that the district is bound by those agreements. It also asks that the IID pay attorney’s fees and costs.