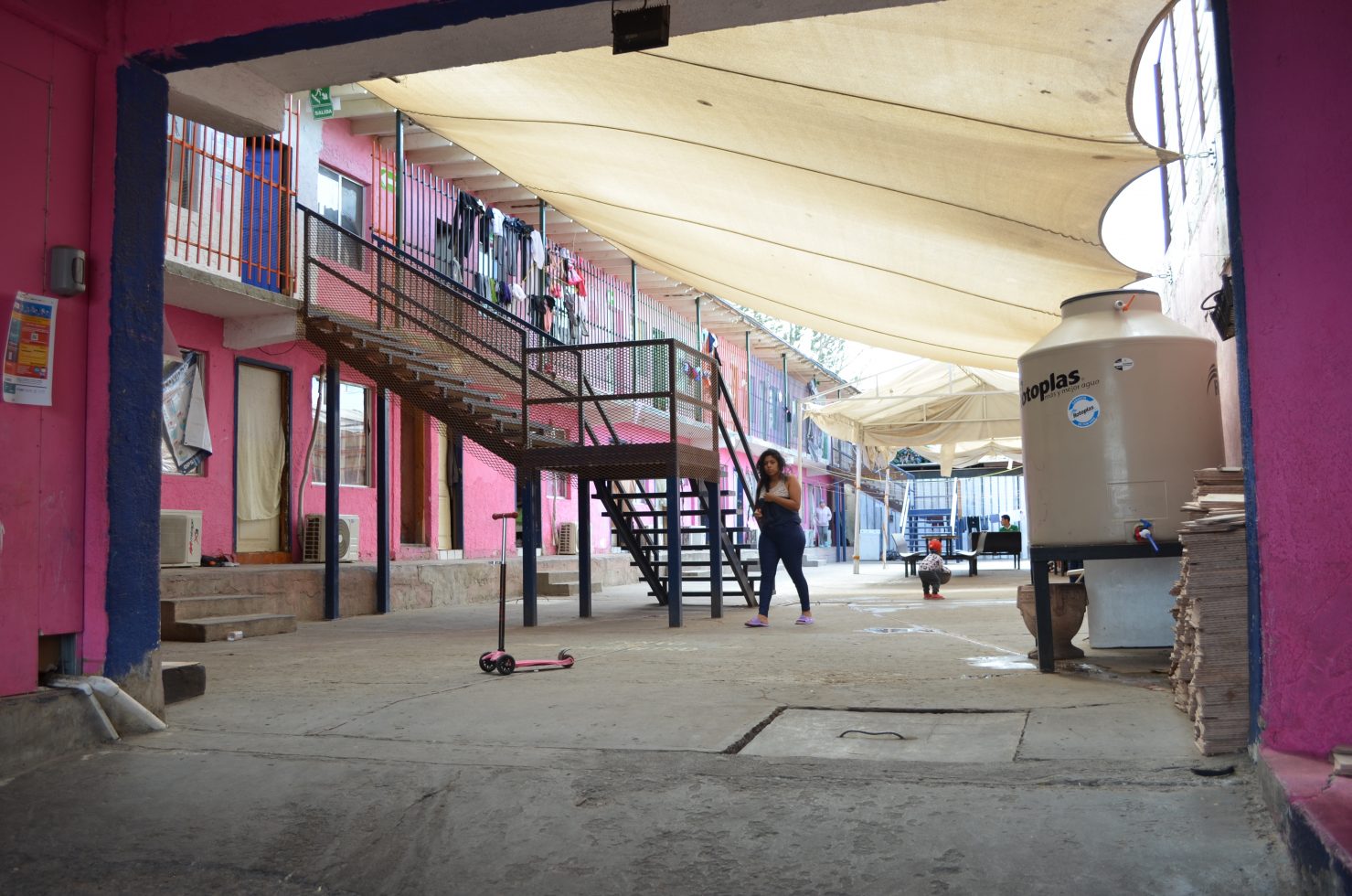 The Cobina migrant shelter in Mexicali currently has more than 130 individuals residing there. An average of about nine immigrant families have sought shelter there on a daily basis in recent weeks, shelter officials said Tuesday, March 23. | JULIO MORALES PHOTO
Home
Featured Stories
In Featured StoriesRegional News

MEXICALI — It’s a scene that has played out countless times at the Cobina shelter for migrants here. Founder Altagracia Tamayo Madueño interviews individuals who recently arrived in Mexicali, often after being deported from the United States or following long treks through Mexico’s interior en route to the U.S.

In a tone that is at once comforting and grave, Tamayo informs recent arrivals of what they may expect from both Mexican and American authorities now that they have arrived at this waystation for migrants who left behind their former lives in search of better opportunities.

On Tuesday, March 23, Tamayo’s remarks were directed at several Central American women who in the preceding days had arrived at the migrant shelter on the western outskirts of the city’s bustling central district.

She admonished a Honduran woman breastfeeding her 14-month-old daughter who was recently deported from the U.S. for having crossed illegally and being apprehended by American immigration officials with her 10-year-old autistic son.

Yet, Tamayo also explains how the woman’s past employment as a nurse and previously established immigration status in Mexico may make it easier for the woman to find work and potential refugee status in Mexico, provided she first ween her toddler off breast milk to begin the arduous process.

“We’re going to see how we can help you,” Tamayo said in Spanish.

The truth is, the shelter could use a lot of help, too.

A recent surge in the number of Central American and Mexican immigrants arriving at the U.S.-Mexico border has placed added strain on the shelter, which has yet to receive the financial assistance the Mexican government had previously promised, and which is largely kept afloat through the generous donations of supporters on both sides of the border, Tamayo said.

Though the Biden administration has softened much of former President Donald Trump’s more controversial immigration policies, Mayorkas also acknowledged that “the border is closed” and that U.S. authorities continue to work with their counterparts in Central America and Mexico to help stem the tide.

But as long as America is seen as a beacon of hope for desperate migrants, they can be expected to keep arriving in Mexico’s border states, Tamayo said.

“The (Mexican) government doesn’t want to admit it, but we will soon reach a point where there will be no space for them,” Tamayo said. “We’re overflowing right now (because) so many people are arriving.”

Since 2016, Tamayo has served as administrator for the Cobina shelter in the city’s Colonia Pueblo Nuevo district, as well as the Refugio del Migrante shelter and a community center for migrants in the nearby central district.

The Cobina and Refugio shelters are among the four that remain of the 16 that had previously operated within the city in recent times. The rest have all shut down because of a lack of resources, Tamayo said.

The Cobina shelter exclusively shelters immigrant families with children, while the Refugio shelter has a mixture of families and single adults. As of Tuesday, March 23, the two-story Cobina shelter housed about 138 individuals in its 23 dorm rooms. At Refugio, some 110 individuals were being accommodated in 43 rooms.

At Cobina, an average of about nine immigrant families have sought shelter there on a daily basis. Only those who can show proof that they had recently tested negative for COVID-19 are permitted onto the grounds.

A recent change in federal law, Tamayo said, now requires state officials to assist shelters that provide housing for the influx of migrants as they arrive in Mexican border states.

Toward that end, the government of Baja California had agreed to provide financial assistance for the cost of rent and electricity at both the Cobina and Refugio shelters, Tamayo said. No such payments have arrived to date, despite her repeated protests.

“The government doesn’t want to help the shelters,” Tamayo said. “They don’t even pay attention to what’s happening.”

Although the shelters have fallen behind on rent and electricity payments, their overall operations have continued to run relatively smoothly thanks to the assistance of a variety of humanitarian organizations and individuals.

El Centro resident Robert Holzman has been making repeated trips to the Cobina and Refugio shelters to donate food, cash, and supplies since fall 2019.

On March 23, he dropped off five 20-pound boxes of frozen chicken thighs at the Cobina shelter, as well as a 50-pound bag of potatoes and a crate of oranges at the Refugio shelter. He also jotted down notes whenever Tamayo would describe an item on the shelters’ wish lists, such as a high-pressure three-burner stove with griddle that the Cobina shelter could desperately use.

A member of the local group Migrant Child Watch, Holzman said his efforts are assisted by like-minded Valley residents, some of whom are both supporters of his group as well as other local activist organizations.

“Migrant Child Watch is supporting the shelters in Mexicali as an essential part of our mission,” Holzman said.

The group’s efforts are a crucial component of the shelters’ survival.

“We have been able to maintain operations because of the food they donate,” Tamayo said.

Additional support has been provided by the organization Yes We Can, which has arranged to have classes taught daily at the Cobina shelter for the dozens of children housed there.

Legal services are made available for the shelters’ migrants by the Los Angeles-based nonprofit Al Otro Lado, which provides legal and humanitarian support for immigrants, deportees, and refugees. Other humanitarian organizations like the Red Cross and the International Organization for Migration have provided invaluable assistance for both the shelter and its occupants, as well, Tamayo said.

Stories of Peril and Hope

For the past two months, 27-year-old Honduran national Victor Ramos has been residing at the Cobina shelter with his wife and two children.

The family left their hometown of Puerto Cortes after an aunt of Ramos’ was murdered and he came forward as a witness. Shortly after meeting with authorities, his life was threatened by the gang reportedly responsible for his aunt’s death.

“We left that very day,” Ramos said in Spanish. “I was lucky I didn’t get killed.”

He arrived in Mexicali after a perilous and degrading four-month journey through Mexico’s interior. His arrival came at a time when the Biden administration had stopped enrolling asylum seekers in the Migrant Protection Protocols.

That program was implemented in December 2018 by the Trump administration. It was informally known as the “Remain in Mexico” policy because it required asylum seekers who showed up at the Southwest border to remain in Mexico while their asylum claims were processed.

Ramos has been provided the aid of an attorney while at the Cobina shelter. He is hoping that with his past employment as a refrigeration technician and auto mechanic, he can apply for a temporary work visa to enter the United States.

He is also anxiously awaiting news of any immigration reform that may benefit him and his family.

Some U.S. officials have estimated that the current influx of migrants at the Southwest border could be the highest it’s been in 20 years.

U.S. Customs and Border Protection reported that immigrant apprehensions totaled more than 100,000 at the Southwest border in February, compared to the more than 74,000 people apprehended in December, according to various national media reports.

Though the agency did not provide specific numbers for apprehensions, Agent Anthony Garcia did state that the sector has encountered an increase in the number of single male adults.

Honduran national Belkis Meliza Santos Perdomo said it took her 22 days to travel from the region of Lempira to the Arizona border, where she crossed illegally and was apprehended shortly afterward.

The 28-year-old said her life was in danger in Honduras, prompting her to flee and leave behind a daughter. As comforting as Santos said her life has become at the Cobina shelter, she is anxious to reunite with a cousin in New York and is willing to attempt another illegal crossing despite being about seven months pregnant.

“My plan is to try again because I’m here alone,” Santos said.

Since having arrived in Mexicali in July 2019, the Cobina shelter has become a “second home” for a 45-year-old Honduran woman who asked not to be identified for fear of her family’s safety in Honduras.

The former business owner said she was being extorted by criminals and was given 24 hours to leave her hometown of San Pedro Sula or face death. She and her then-6-year-old daughter made it to the Mexican border state of Sonora and were apprehended by Border Patrol shortly after crossing illegally near San Luis Rio Colorado.

Her attempt to seek asylum through the Migrant Protection Protocols program has been delayed by the COVID-19 pandemic, which prompted the temporary postponement of court hearings. She, too, admitted to having more hope for her and her daughter’s chances of being granted asylum in the U.S. now that Biden is president.

Despite her past and current circumstances, the woman said she is thankful for the support of the Cobina shelter and Tamayo its administrator.

“I can tell you that she is the angel that God has placed in our lives,” the woman said.

Individuals who are interested in supporting the efforts of Migrant Child Watch on behalf of the Mexicali shelters can arrange contact-free pickup or drop off donations by contacting Holzman at  migrantchildwatch@gmail.com or texting 760-234-5430.

Next
New First Church of Holtville Reverts to Past Good Deeds