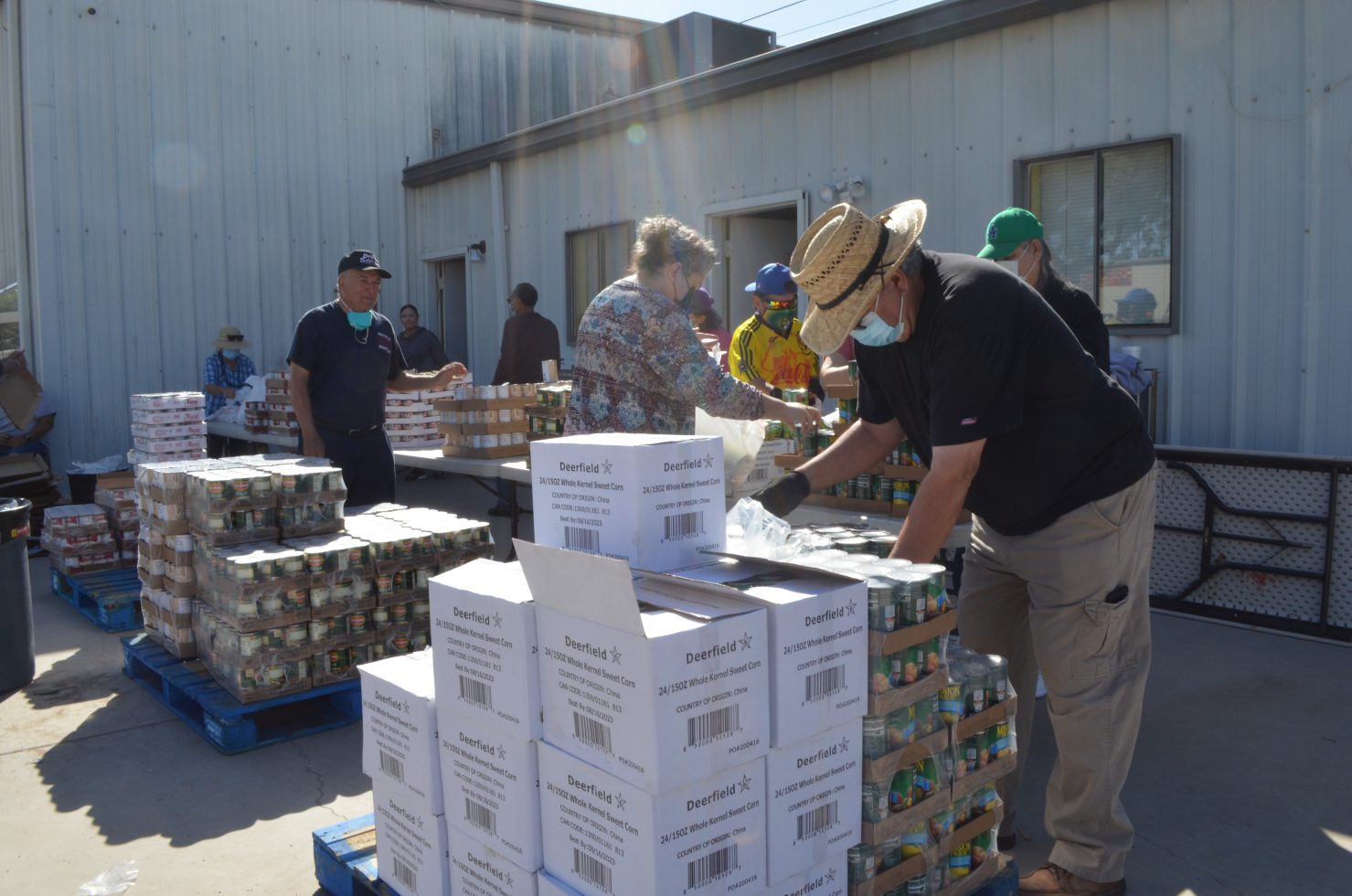 Volunteers gathered at Turning Point Ministries in Holtville on Friday, March 19, to help separate food items that were to be distributed to less-fortunate families the following day by the First Church of Holtville. | JULIO MORALES PHOTO
Home
Featured Stories
In Featured StoriesLocal News

New First Church of Holtville Reverts to Past Good Deeds

One of those good deeds was on display Saturday, March 20, when some church members and dozens of volunteers gathered to distribute donated food items to hundreds of less-fortunate residents.

But with the closing of the Methodist Church on March 5, the monthly food distribution event was instead held at the Turning Point Ministries offices on Cedar Avenue. The new temporary location also allowed organizers to distribute the food in a drive-through format.

“Everything went really good,” said church member Becky Miller, who has been helping organize the monthly events for the past nine years with her husband, Bob. “People really like the idea of driving through instead of having to wait in line.”

The monthly events had been hosted at the site of the former Methodist Church at 217 W. Seventh St., until a recently settled civil lawsuit prompted the property to revert to the possession of the church’s parent corporation, the South District Union of the California-Pacific Annual Conference of the United Methodist Church.

The parent corporation’s lawsuit was filed in response to the alleged failure of the former Holtville congregation to minister to the city’s overwhelming Latino population, county Superior Court records stated.

While a local judge did not rule on the merits of those allegations, the court did find that the parties’ binding contracts established the parent corporation as the owner of the church grounds, as well as an adjacent house at 225 W. Seventh St. and a parsonage at 663 Cedar Ave.

The loss of the church forced its former congregants to scramble to identify another venue where they could potentially host the food distribution events, which provides U.S. Department of Agriculture supplemental food commodities to community members through a partnership with the Imperial Valley Food Bank.

“Right now, it’s just temporary until we figure out what is really going to happen,” Miller said, while thanking Turning Point for its support. “They did not have to offer it up, but because of what they do, they were the only ones who offered.”

Members of the newly formed First Church of Holtville also had to find a new place to host Sunday services following the March 5 loss of the Methodist Church on Seventh Street.

Initially after the closure, congregants gathered at an El Centro restaurant for brunch and an inspirational message, said Don Brock, a First Church of Holtville member and former longtime member of the closed Methodist Church.

Congregants then gathered at Brock Brand Asparagus in El Centro for a more formal service the following Sunday. They met again on Sunday, March 21, at the Woman’s Club of Holtville, where the congregation will continue to rent the space, for a nominal hourly fee, until a more permanent location is identified.

Though First Church of Holtville members have expressed an interest in renting the former church’s property for services and food-distribution events, dialogue between parties has soured, making any kind of favorable agreement unlikely, Brock said.

One sign of the parent corporation’s bad faith effort is its offer to sell the former church site to the upstart congregation.

“How insulting is that?” Brock said in a phone interview Friday, March 19. “We don’t have the money.”

In its response to the parent corporation’s lawsuit, the local congregants had pointed to the monthly food-distribution events as proof of its ministering to the local Latino community.

The food distributions are typically held on the third Saturday of the month. Dozens of volunteers will gather on the day before to help prepare for the event by separating the donated food items into bags that are then given to families in need.

Holtville resident Gerardo Martinez said he has been volunteering for the food distribution for the past year. After having been released from incarceration, Martinez said the county Probation Department advised him of the event and the food made available to vulnerable families. Aside from picking up some donated food that day, Martinez said he immediately had offered to volunteer, as well.

“I like to help people,” Martinez said in Spanish, as he helped bag food items at Turning Point Ministries on March 19.

If not for the support of Turning Point Ministries, the monthly event may have had to have been cancelled for March.

On Saturday, March 20, about 300 families took part in the food distribution, Miller said.

In exchange for the use of its facilities, Turning Point Ministries’ will be receiving a monthly financial contribution from event organizers, Miller said. She also encouraged members of the community who are supportive of the group’s efforts to potentially donate to Turning Point, as well.

With the approach of summer and its high temperatures, event organizers have plans to reach out to local businesses to determine whether the church can borrow swamp coolers to help keep volunteers and participating families cool during the event, Miller said.

The decision by Turning Point Ministries to lend the use of its facilities to First Church of Holtville was a “no brainer,” said Pastor Norm Chandler, considering the good works the church is performing on behalf of the community.

“Our space is available to them as long as it’s needed,” Chandler said in a phone interview on March 19. “We’re going to help them do what the Lord has called them to do.”

The facility turned out to be a good fit for the First Church of Holtville, since Turning Point already is approved to received donated food items from the Imperial Valley Flood Bank, Chandler said. Through its own partnership with the local food bank, Turning Point’s men’s home receives donated food items about once a week, he said.

“Our facility is available for anyone to use when it comes to the community and community outreach,” Chandler said.

All its former members have joined the First Church of Holtville, which was incorporated as a limited liability company on Jan. 21, said church administrator Dina Patzloff in an email on Monday, March 22.