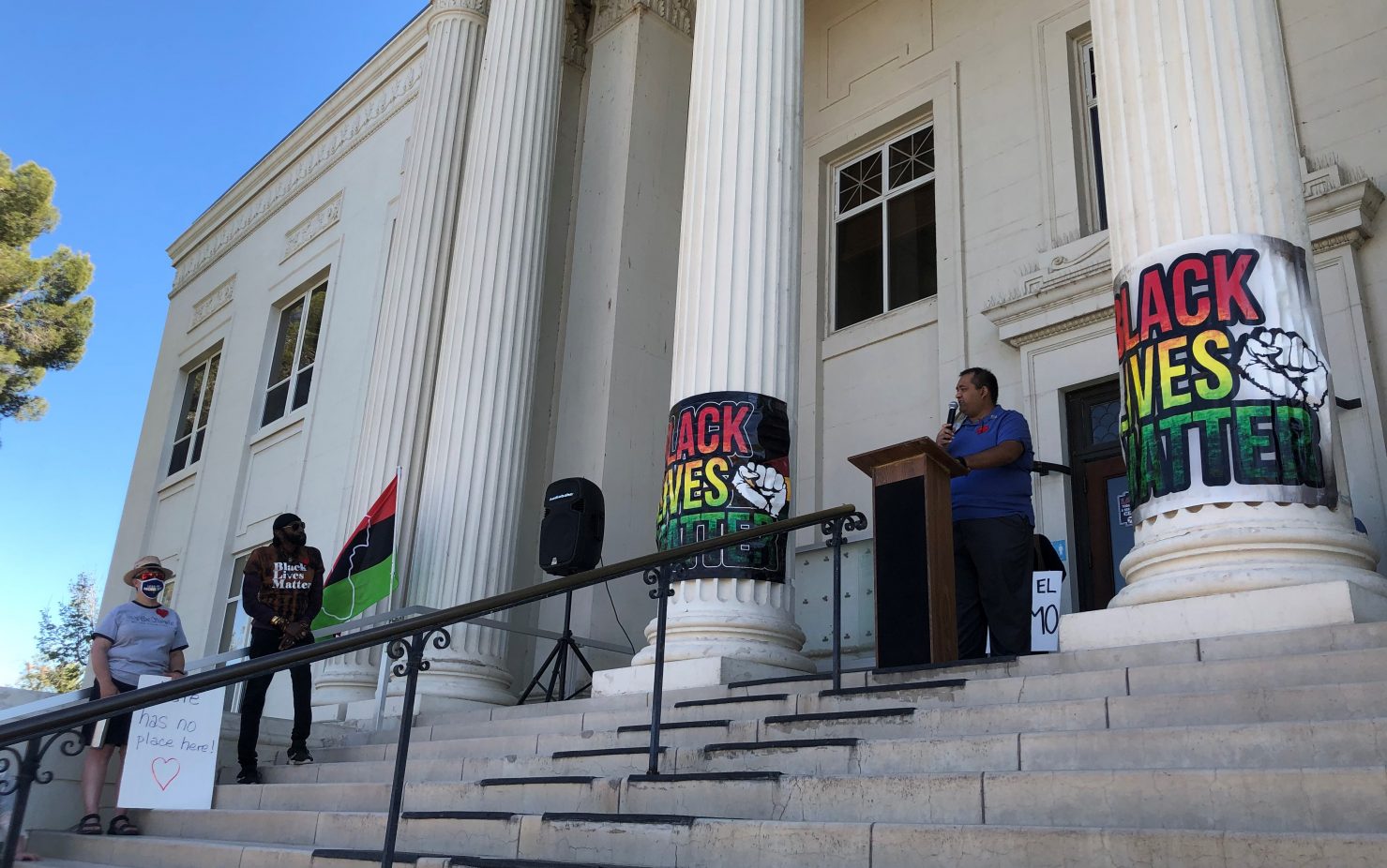 EL CENTRO — After the World Trade Center attacks in 2001, Kelly Ranasinghe began to know what it was like to be targeted based on race and stereotypes. His father, who was Sri Lankan, was “a dark-skinned south Asian.”

“I remember seeing racism against my dad,” the 39-year-old Ranasinghe said. “My family has felt it, and sadly at the same time, that’s not new… Now it seems to have spiraled out of control.”

Ranasinghe and others gathered on the Imperial County Courthouse steps on Saturday afternoon, March 27, to hold a rally to speak out against the racism and anti-Asian commentary that has surrounded the COVID-19 virus and the increase of crimes against those in the Asian American and Pacific Islander communities over the last year.

Organizers of the Stop Asian Hate rally, headed by Imperial Valley Black Lives Matter and the Social Justice Committee of Imperial Valley, said they wanted to stand in solidarity and compel the community to be aware of the plight of Asian American and Pacific Islanders not only in other regions but in our own Valley.

“We are standing outside a courthouse in front of the County Administration Center in a community which was built on south Asian and Chinese and Latino labor,” said Ranasinghe, an attorney in El Centro. “If you cross our border, you’ll see our south Asian community thriving … the descendants of the immigrants that came to the U.S. in the early part of the century. We are part of this community; we always have been.”

The recent mass shooting on March 16 that targeted Atlanta-area spas, resulting in eight deaths, with most of the victims being Asian American women who worked there, has shined a light on the number of crimes being committed against Asian American and Pacific Islander people in the United States and is garnering national attention.

The question of whether it will be classified as a hate crime is still unanswered, though some say the killer could have been aware that the locations were identified as being employers of Asian American women. The suspect has pleaded not guilty.

With some holding signs stating, “Racism Kills” and “Remember their names,” with the names of the Atlanta shooting victims, it was notable that most of the attendees of Saturday’s rally were not of Asian American and Pacific Islander descent.

Imperial resident and student Jazmyn Horton, 24, said she was inspired to attend the rally because of her own connection with a best friend, who is Korean.

“The first thing I wanted to do when I heard about (Atlanta) is hug her. I’ve been on the verge of tears this whole time. This is my way of standing in solidarity and supporting her,” said Horton, who is earning her master’s degree in social work at San Diego State University-Imperial Valley campus.

Several of those who attended the rally, including Horton, said they wished there were more publicity surrounding this issue of anti-Asian hate, because although many think the population in Imperial Valley is dominated by other cultures, the Asian American presence is much stronger than some would think.

In the United States, the incidents of hate crimes against the Asian community is likely much higher than reported, because many are verbal attacks, according to the Poynter Institute. Ranasinghe noted that a group called Stop AAPI Hate has catalogued 3,800 incidents — which is not limited to crimes — during the first year of the pandemic. Many of the incidents targeted women.

Some hate crimes are facing prosecution, such as an assault against a woman in the Bronx area of New York City who was hit on the head with an umbrella and fought back against her assailants who were spouting anti-Asian comments. But others forget the lesser of offenses that don’t receive such widespread media coverage like those who say racial slurs, or exhibit racism in a non-violent form.

Another speaker at the rally, Mark Wheeler, associate dean for academic affairs at SDSU-IV, said there’s much more work that needs to be done for the campus to reach out to not only students of Asian descent but their families.

“One way it has not served the community well is it has not bridged (the gap) to the Asian community in Mexicali and Imperial Valley to ensure that our Asian American brothers and sisters and their children have hope for a university education if they want it,” Wheeler said. “They should be able to have it.”

And while there may have been a smaller turnout of Asian American and Pacific Islander residents at the rally, the message of unity and of support for all denominations facing hatred or racism rang clear among the speakers and attendees.

Ranasinghe, who attended the rally with his wife, Emily, and his baby daughter, said he continues to feel fear for his elderly mother in San Diego when she goes out into public. He said with terms like “kung flu” and “China virus,” it’s cost him personal relationships as the COVID pandemic became a politicized issue.

Ranasinghe said it cost him an almost decade-long friendship: “It’s been hard seeing people be radicalized … It was devastating to me. We hadn’t talked for a year until I went into the hospital for pneumonia.”

He said they’re working on rebuilding their friendship, outside of political and racial justice views.

Within the culture, Ranasinghe added, is the additional struggle of communication between generations. How the older Asian American and Pacific Islander parents speak to their children is often not as frank as other cultures. So, his mother, he explained, is less likely to tell him if she’s scared or doesn’t feel safe. That part of it, not wanting to impose on younger relatives, leads to sometimes suffering in silence.

Social Justice Committee of Imperial Valley chairperson Marlene Thomas said it was important for the committee to include Asian American and Pacific Islander residents in their fight for social awareness and combating racism locally.

For Ranasinghe, every act of violence or racism against the Asian American and Pacific Islander community can feel exhausting.

“I know you’re tired,” he said to the people at the rally. “I know, I’m tired of reexplaining racism, and bias, and privilege, and intersectionality, over and over again. Every time we do this, it reawakens the pain and the memory.”

“I pray that all of us here today can work with our neighbors, our students, our friends and family to raise consciousness,” SDSU’s Wheeler said. “You and I, we’re here to remind ourselves that we’re not alone … And we can help raise love where it hasn’t yet found itself.”

Next
FOOTBALL: Vikings Take Buzz Out of Yellowjackets