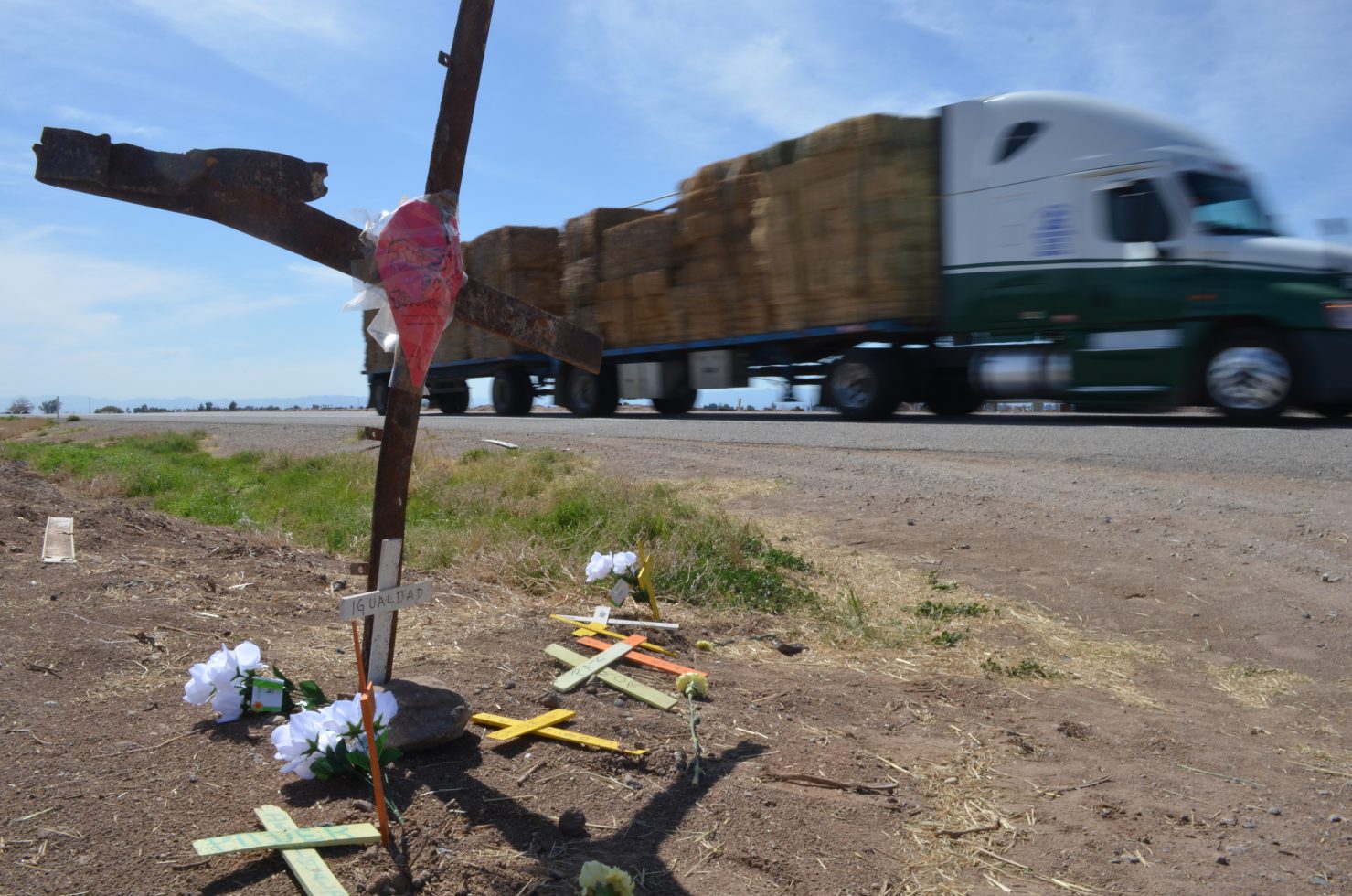 A makeshift memorial has been erected at the southeast corner of Highway 115 and Norrish Road outside of Holtville in connection to the fatal two-vehicle traffic collision that claimed the lives of a total of 13 individuals traveling in a sport-utility vehicle. | JULIO MORALES PHOTO
Home
Local News
In Local NewsPublic Safety

A Mexicali man was charged in federal court on Tuesday, March 30, with coordinating the March 2 human-smuggling event that led to the deaths of 13 Mexican and Guatemalan nationals in a crash near Holtville, according to the United States Attorney’s Office.

Jose Cruz Noguez, age 47, a legal permanent resident of the United States, was taken into custody on Monday night, March 29 as he crossed into the U.S. from Mexico at a Calexico-area Port of Entry.

Cruz made his first appearance in federal court in El Centro on Tuesday via teleconference before U.S. Magistrate Judge Ruth Bermudez Montenegro.

Cruz has been charged with “conspiracy to bring aliens to the United States outside a port of entry causing serious bodily injury/placing a life in jeopardy” and “bringing in aliens without presentation for financial gain,” the press release states.

(The full criminal complaint can be read here.)Download

Judge Montenegro ordered that Cruz remain in custody and scheduled a detention hearing for Monday, April 5, at 9 a.m.

It was not available from the U.S. Attorney’s Office where Cruz was being held.

“These smuggling networks seek maximum profit by moving as many people as possible across the border with zero regard for their safety and well-being,” stated Acting U.S. Attorney Randy Grossman in the press release.

“Cramming dozens of people into eight-passenger vehicles and driving recklessly to avoid detection shows an utter disregard for human life. We will find and prosecute smugglers who use these methods and cause such tragic and avoidable deaths,” Grossman states.

Cruz’s arrest is the first on record tied to the deadly crash at the intersection of Highway 115 and Norrish Road about two to three miles northwest of Holtville.

Some 25 immigrants, including the driver, were crammed packed into a Ford Expedition that entered the United States illegally through a 10-foot breach in the border fence about 30 miles east of Calexico.

Heading west on Norrish Road, the sport-utility vehicle, which had its seats removed to fit that many passengers, was T-boned in the intersection of Highway 115 by a Peterbilt semi-truck traveling north.

The SUV, driven by Mexicali resident Jairo de Jesus Dueñas Landin, 28, had run the posted stop sign when it was struck, ejecting numerous passengers onto the roadway.

Twelve people died at the scene and one other died in El Centro Regional Medical Center shortly after.

The accident was described as “gruesome” by Imperial County Fire Chief Alfredo Estrada, but for those who were among the first to arrive and render aid to, it was a scene of nightmares.

Holtville Fire Chief Alex Silva was one of those early arrivals to witness the dead and dying tossed about the intersection, and it affected him and his department greatly. In the days after the accident, Silva and his first responders sought counseling.

“I’m so glad someone is going to pay for this,” Silva said on Wednesday morning, March 31, after learning of Cruz’s arrest.

“Nothing’s going to bring any of them back, but hopefully (Cruz’s arrest and prosecution) will prevent someone else from getting hurt,” Silva added.

Cruz came to the attention of law enforcement when he was identified by another suspected smuggler who claimed to be an associate of Cruz, according to the U.S. Attorney’s Office. The associate was arrested at the Campo Border Patrol Station for an unrelated smuggling event on March 15, two weeks after the fatal crash in Holtville.

The associate pointed the finger at Cruz, telling authorities he had worked for Cruz in the past, and had been recruited by Cruz to be the driver of the ill-fated vehicle from that tragic day, the release stated.

Cruz had offered him $1,000 per passenger, but he declined, according to the criminal complaint against Cruz by the U.S. Attorney’s Office.

At the hearing on Tuesday, Cruz was advised of the charges pending against him. The matter was set for a preliminary hearing on April 13 at 9 a.m. and arraignment on April 27, also at 9 a.m. before Judge Montenegro. The court appointed federal defenders as defense counsel in this case.

If found guilty of the first charge of conspiracy to bringing aliens to the United States and causing injury, he could face a maximum sentence of 20 years in federal prison, according to the press release.

The suspected smuggler caught in Campo who claimed to be an associate of Cruz participated in a secretly recorded conversation with Cruz on Friday, March 26, according to the complaint.

During that call, Cruz confirmed his involvement in the March 2 smuggling incident that led to the crash, including that his other associates cut the border fence, that the vehicles were fully loaded, and that he collected money for the job, according to the press release.

Cruz stated there were 60 “pollos” — his term for customers looking to cross illegally — in the two vehicles and the driver (of one of the vehicles) was going to make $28,000, the complaint states.

“The associate told authorities he had grown up in Mexicali and had known Cruz for several years. He said that he illegally entered the United States six months ago and started working for Cruz, who he described as a coordinator.”

Additionally, the complaint states, the associate said Cruz required that he scout areas near El Centro, where Cruz had groups of people illegally enter the United States.

Cruz oversees the transportation of individuals who are in the United States illegally to stash houses, collects smuggling payments from family members or sponsors, recruits drivers, and scouts for the presence of law enforcement, the press release and complaint states.

The associate stated that two weeks prior to the March 2 smuggling event, Cruz attempted to recruit him to drive one of the smuggling vehicles north from Mexico into the United States through a section of the fence that Cruz said would be breached, the complaint states.

Cruz told his associate there would be up to 20 people in the vehicle and that the associate would be paid $1,000 per person for the job, according to the complaint, which also said Cruz told the associate that Cruz would oversee the smuggling event and would arrange for the vehicles that crossed to go to a stash house in Holtville.

It remains to be seen whether Cruz will be found guilty of the crimes against him, but this case already has affected many lives.

Guatemalan nationals who died in the accident were Magdalena Elizabeth Lopez Escobar, 20, and Yesenia Magali Melendrez Cardona, 23, of Chiquimulilla, Guatemala.

(Read the story of Yesenia Cardona, as told through her uncle.)

Injured in the crush was the semi driver, 68-year-old Joe Beltran of El Centro, who sustained major but nonlife-threatening injuries and had to be airlifted to Desert Regional Medical Center in Palm Springs.

Beltran, a Havens & Sons driver, reportedly returned home a day later, March 3, according to a statement issued to the media by Beltran’s family.

Beltran suffered seven broken ribs and a deep bruise to his knee and was in “a lot of pain” from his chest injuries, his family stated on March 10.