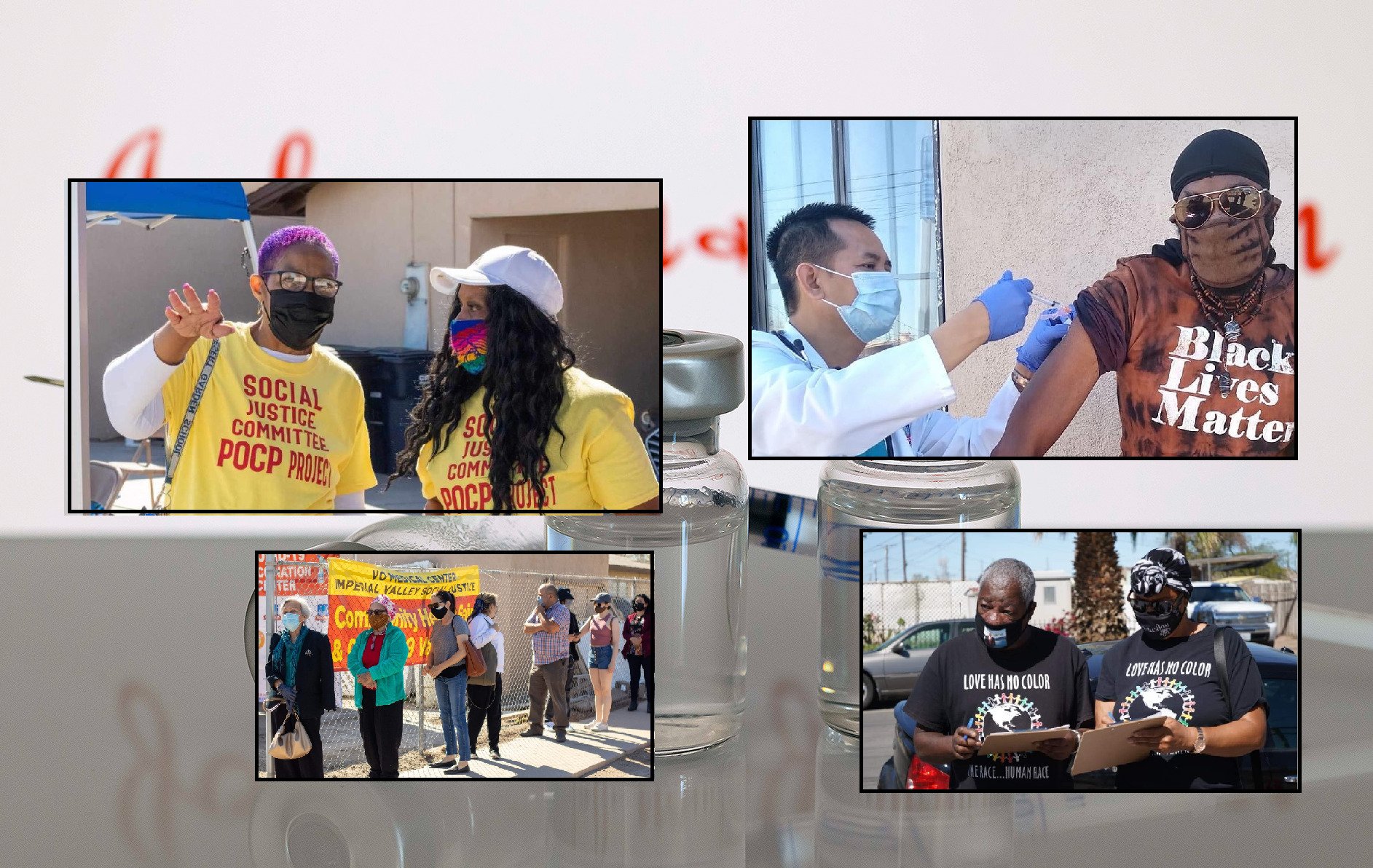 EL CENTRO — It was a confirmation of her worst fear. At first, with the fevers and her unable to stop throwing up, Kathryn Taylor Dunn knew this was different from any other illness she had experienced.

A stroke survivor, she said when she contracted COVID-19, the 58-year-old Calipatria resident said she felt like, “the walking dead.”

“It’s like someone sucked all your senses from you,” Dunn said.

Yet as an African American woman in Imperial County, she also felt hesitant to let even friends or family members know she had been diagnosed. The stigma over the condition within her circle was pervasive and persistent.

“I had a couple friends (and myself, but) no one wanted to admit that we had it … people weren’t (sharing) if they had it,” she said.

Like the Latino and Hispanic population of the United States, the Black community — statistically underserved and in need of greater access to medical care and health education — have suffered with and died from COVID in dizzying numbers compared to their white counterparts.

Due to underlying health factors, socioeconomics, jobs held, and healthcare access, African Americans in America have contracted the disease at a rate 1.1 times greater than that of whites (1.3 times for Latinos and Hispanics), been hospitalized at a rate 2.9 times greater (3.1 times for Latinos) and have died at an alarming rate of 1.9 times greater than their whites counterparts (2.3 times for Hispanics), according to the most recent available data from the U.S. Centers for Disease Control and Prevention.

Now, as vaccination efforts in California, and across the country, ramp up for the most underserved minority populations in some of the poorest zip codes in the state, 12 of which are right here in Imperial County, outreach to the Valley’s Black population was the focus of a recent clinic held at one of the region’s 13 African American churches.

Dunn was one of many on hand at a vaccination clinic put together by Marlene Thomas, head of the Imperial Valley Social Justice Committee, through a partnership with the local predominantly Black churches, and the Vo Family Medical Center on Saturday, March 27, in El Centro.

“There’s a vulnerability of the marginalized community, and so we reached out to the faith-based churches and where we knew there was less access to healthcare and a socioeconomic barrier,” Thomas said. “I was beyond happy to see what it means to the community. That never seems to happen when they come to the East Side community.”

By centralizing its efforts in reaching out to the Black community in Imperial County, the vaccination clinic administered 100 Johnson & Johnson single-dose vaccinations against the SARS-CoV-2 virus that causes COVID-19, with an estimated 45 percent of those doses going specifically to African Americans.

Thomas said although the event was targeted to reach an underserved portion of the population, no one at the event was turned away if they met the current state standards to receive a vaccine.

At the heart of the day was the effort to reach out to the Black community, which locally and nationwide have been hesitant to trust or take the vaccine even when they qualified to receive it, speaking to the larger impact COVID-19 has had on minorities.

Thomas said it was essential to have the event on the east side of El Centro, combining outreach with pastors of churches that have many of their congregants in that 50-plus age group. Further, the issue of trust came to light as Thomas herself was vaccinated Saturday, despite being eligible for months.

Although Thomas herself said she made the decision to become vaccinated once the one-shot Johnson & Johnson dose became available, the Social Justice Committee aims to combat misinformation that has spread during the pandemic but encourages individuals to make their own decision about the vaccine.

Desiree Johnson, a 29-year-old from El Centro, was someone who was hesitant to take the vaccine. She has been working from home during the pandemic and received her shot on Saturday. Her mother had already received her vaccination.

“I remember not a lot of people were taking it seriously (in 2020). They’d say, ‘Oh, I never get sick,’ or things like that,” Johnson, a call center employee, said.

Her fear was possibly experiencing post-vaccine symptoms, which can include fever, arm soreness at the site of the shot, body aches, and more. She’s had flu shots before, but it was the unknown about COVID-19 that made her pause.

“I was sort of dramatizing it in my head,” Johnson said. She experienced mild side effects following Saturday’s event and was feeling better in a day or two.

There is a deep underpinning of racial disparity that can be linked to the distrust of the medical field overall in the past racial experiments within the African American community at large in the United States.

For many Black Americans of an older generation, that mistrust has roots what has been termed the “medical racism” of the Tuskegee experiments that ran from 40 years, from 1932 to 1972, in which some 400 African American men were infected with syphilis so the U.S. government could track the natural progression of the disease.

A recent report from UnidosUS, the NAACP, and COVID Collaborative revealed that just 14 percent of Blacks and 34 percent of Latinos Americans say they have trust in the safety of a new COVID-19 vaccine.

The study also found that 18 percent of Black and 40 percent of Latino respondents say they trust COVID-19 vaccine effectiveness.

At least for the African American respondents nationally, many referenced the Tuskegee experiments as a source of their trepidation.

Pastor Terrence Sims of the Johnson Chapel-African Methodist Episcopal Church in El Centro, who was on hand during Saturday’s event, said he did initially encourage caution among his congregation about the vaccine.

Sims said with the exception of some young children or those in their 20s, most of his congregation’s underlying conditions, including diabetes, heart disease, and obesity, put them at a higher risk with COVID-19.

“Because of the trauma that the African American community has experienced in this country,” Sims said of his initial hesitation, “we did advise our people not to be the first in line for the vaccine. We never said don’t take it, but that stigma runs deep.”

Sims pointed to the historical issues regarding medical research in the Black community, and skepticism about the side effects when it came to ethnicity.

Like many who have received the vaccine, Desiree Johnson said her daily activities or behavior will remain the same for a while. “I do like to travel, but I’m still going to have that on a standstill … now I can breathe a little more, feeling like I’m going to be OK even if I get exposed,” she said.

The encouragement of others who are part of her community made a difference, Johnson noted. Dunn, a retiree of Clínicas De Salud De Pueblo, said she likewise feels the fact that the vaccination was headed by people of color had a significant impact.

“We all need someone to advocate for who we are,” Dunn said. “It needs to be someone who looks like me who will get people to come out of the woodwork and use the resources available to them.”

Dunn, whose heritage is East Indian and African American descent, said being able to relate to others is essential. “It is important for other people of color to make a difference and also help pull someone else in that need to see someone they trust,” Dunn explained.

“We may not know for many years if there’s consequences for vaccinating. But we literally had to overcome this once I saw 10, 15 million people being vaccinated, I said that what we do know now is that you have a better chance of vaccinating, than if you’re 75 or 80 years old and get COVID,” Pastor Sims added.

During his virtual church meetings, Sims said he even opened the dialogue for others to share their testimonials of receiving the vaccine over the last several months, to educate and reach out to others who were still resisting.

His wife, he said, has gone so far as to visit six different states to assist others in getting access to the vaccine. He said making matters more difficult has been the added barriers of assisting a generation not well-versed in online registration systems or who might not have access to a vehicle or a smartphone to schedule COVID-19 testing or vaccination clinics that have predominantly required appointments.

An elderly woman from El Centro, Sims said, had to be taken to Yuma for her vaccination.

Saturday’s clinic, and what it meant to the community, made Sims emotional. Within an hour and a half, all 100 doses had been administered.

“I know how hard it is in our community in particular to have that leap of faith and come out. It was refreshing to see the number of people there,” Sims said.

He mentioned that one of his church members, a correctional officer at a local prison, could have taken her vaccine as early as December. However, it was the clinic held by partnering churches, he said, that helped her get beyond the stigma and fear.

“Seeing her get past that, it was glaring to also realize how hard and difficult it was to even get the (vaccine) into the community and how many months have gone by,” Sims said. “As excited as I was, it’s concerning that it seemed like El Centro was forgotten.”

Although many would associate vaccine hesitancy with the politicization of the COVID-19 pandemic and a lengthier history with experimentation, what many are beginning to reckon with now is the loss of their elders and loved ones because of the disease itself.

“It’s not just the lives gone; it’s lives lost. We can’t ever really fully count the cost when there’s children growing up without parents, without others in their life,” Pastor Sims said. “COVID will leave its mark on future generations despite that we’re turning the corner today.”

For more information on vaccination clinics, visit the Imperial County Health Department website or visit www.myturn.ca.gov to learn when you’re eligible to receive the vaccine.