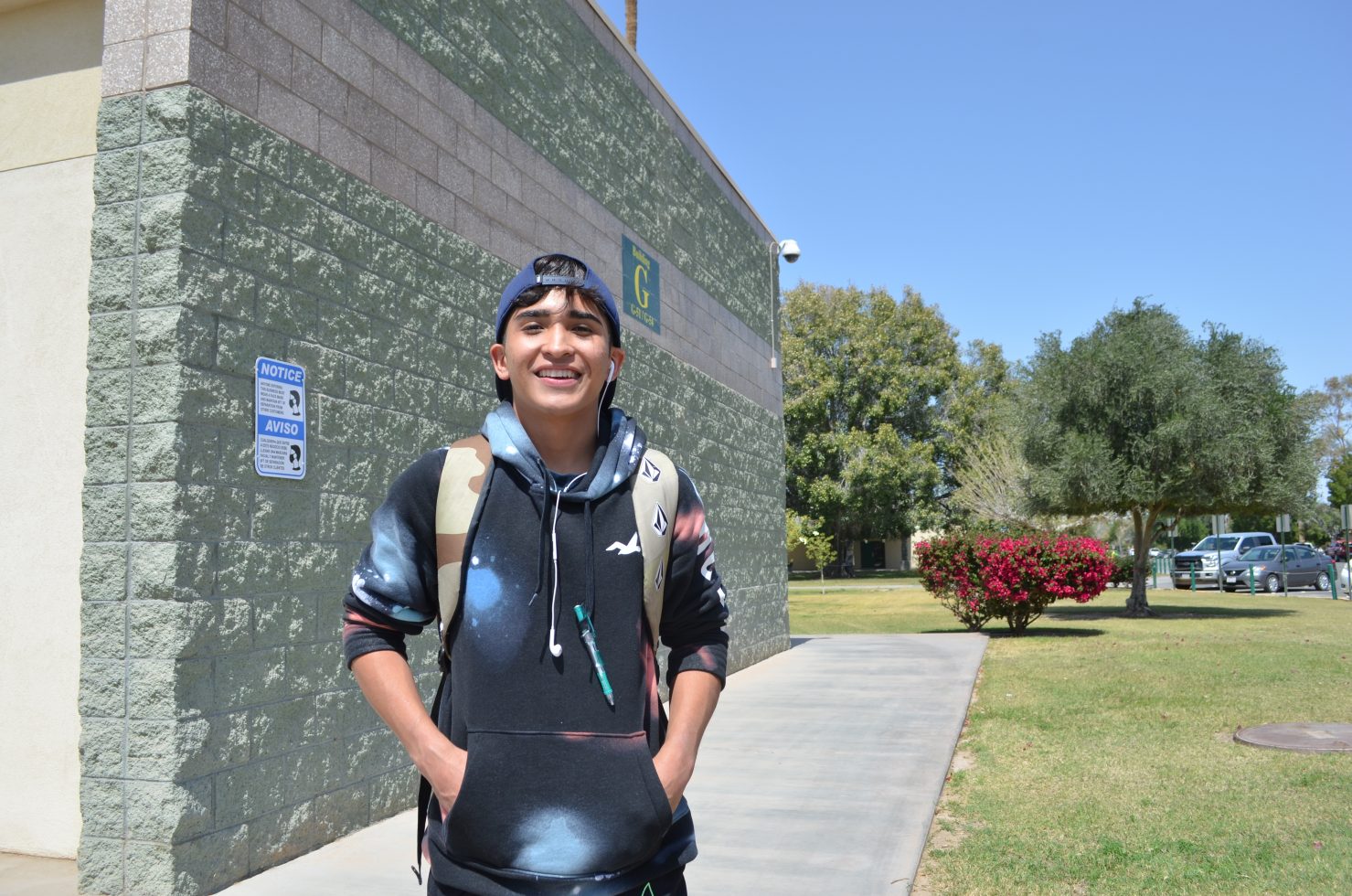 Holtville High senior Raymond Castillo, 18, was one of 11 students who returned to in-class instruction at the campus on Tuesday, March 30, after a year of distance learning. | JULIO MORALES PHOTO
Home
Education
In EducationFeatured StoriesLocal News

HOLTVILLE — For the first time in over a year, select students were allowed to return to Holtville High School for traditional in-person instruction on Tuesday, March 30.

The timing of the reopening of the campus for in-person instruction could not have come sooner for senior Raymond Castillo, who said that distance learning has been “pretty rough” for him.

The 18-year-old said that he encountered just three of his peers during the six different classes he attended on Tuesday. He also credited his parents for pushing him to return to the campus for in-person instruction.

“They were the ones who were adamant about it,” Castillo said.

Tuesday’s reopening of the campus was exclusively for seniors whose last name started with a letter between A through L. On Thursday, April 1, seniors with last names M-Z will be allowed to resume in-person instruction.

The two groups of seniors will then continue attending in-person classes on their respective day of the week.

All told, 11 such seniors attended traditional in-person classes on Tuesday. The high school has a senior class of about 120 students, of which an estimated 30 percent of their parents indicated in a survey that they would like to have their children return for in-person instruction, Principal Anthony Arevalo said.

As of Tuesday, all the high school’s faculty that teach seniors were on campus.

Tuesday’s milestone was a welcome one for English teacher Mike Goodsell.

“Today was the first day I’ve seen a student in my room in over a year,” he said.

Though he referred to the overall attendance of seniors in his classes as a “sprinkling,” Goodsell said he expected their number to increase following the weeklong spring break of April 2-9.

The current hybrid model employed at the campus means that faculty continues to teach distant learners while those in attendance on campus are following that instruction, as well.

Math teacher James Anderholt said that the six periods he taught on Tuesday attracted a total of five seniors, with one such period containing two seniors in attendance on campus.

The resumption of traditional in-person classes also made for a less lonely experience compared to distance learning, he said.

“It was nice,” Anderholt said.

And although math is the type of subject matter that students can practice learning with direct instructions that translate easily online, in-person instruction provides additional opportunities for greater interaction and discussion, he said.

Agricultural science teacher Jennifer Sutter also had a total of five seniors attend her classes on Tuesday. But in contrast to those learning online, those five were able to disconnect from the computer for their assignment of the day.

“They’re working on a different project in the classroom now,” Sutter said.

Going forward, she said she expects most of her onsite students’ studies to transition to outside of the classroom and involve more hands-on training.

“As an agriculture teacher, being online is like our worst nightmare,” Sutter said. “It’s really hard for students to experience something when they’re looking through a screen.”

“I think there’s a huge learning gap between online and in person,” Cronkright said.

On his first day of in-person instruction, art teacher Alfredo Guzman said he was personally happy to see some students he had yet to meet in person as well as returning students from previous years.

The overall attendance for his different periods was capped at five seniors, as well. While the hybrid teaching model requires his focus to remain on the distant learners, the students who were on campus on Tuesday had increased opportunities for one-on-one assistance.

Aside from the estimated 28 Holtville High teachers that were present on Tuesday, an additional four paraprofessionals, four custodians, one librarian, one technician and two counselors were on hand, too, said Principal Arevalo.

In the coming weeks, additional high school students will be allowed to return for in-person instruction on designated days of the week as part of the hybrid teaching model the campus has adopted amid the ongoing COVID-19 pandemic.

Campuses within the Holtville Unified School District began to resume in-person instruction in early March after its COVID-19 safety plan was approved by local and state public health officials while the county had remained in the Purple Tier of the state’s reopening plan.

The county’s transition to the Red Tier of the state’s reopening plan on March 9 had also allowed for the resumption of in-person classes for grades 7-12.

Holtville High seniors who may not be returning to the campus for instruction this week were nonetheless provided the opportunity to gather with their peers at the Barbara Worth Country Club on Sunday, March 28.

The gathering was organized by several parents of high school seniors who wanted to host a memorable school-related event for their children amid the ongoing pandemic, said Mariana Garewal, whose daughter, Abby, is a senior.

Garewal’s brother, Eddie Mejorado, is the golf resort’s owner and had been pestering Garewal about hosting such an event at the venue for Holtville High’s senior class.

“It was nice having the kids gather and be able to sit and talk,” Garewal said. “Some of them do see each other, but a lot of them don’t.”

Pentagonal Brewing Co., which is located at the resort, provided a free lunch of hamburgers and fries for the dozens of seniors who had made reservations to attend, Garewal said.

The group of Holtville moms have been keeping contact with high school officials to determine whether the seniors’ traditionally scheduled events and activities will take place this school year. In the event the ongoing pandemic cancels those events, the group has plans to step in to provide an alternative.

“We’re prepared to plan something moving forward in case the school says it cannot hold any events for kids,” Garewal said.