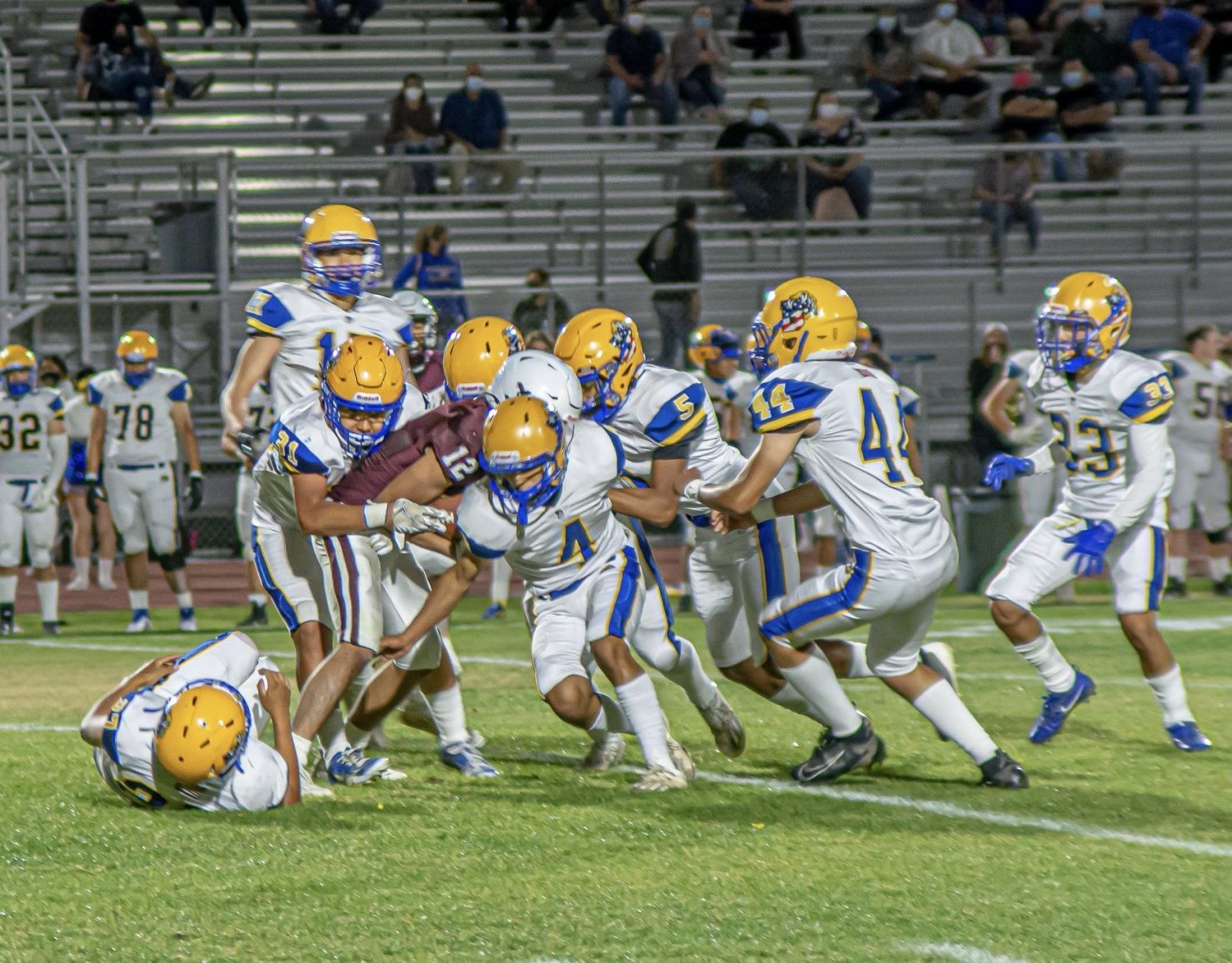 Calexico received the opening kickoff and drove to the Brawley 20-yard-line before the Wildcats stopped the Bulldogs and forced a turnover on downs. That would be as close as the Bulldogs (1-2 overall and in Imperial Valley League) would come to the end zone the rest of the game.

“We came out strong, but then we sort of lost our motivation,” said Calexico’s sophomore quarterback David Esquer, who completed two passes in the opening drive.

Brawley took possession and marched 78 yards, finishing the drive with a 19-yard touchdown pass from Gutierrez to junior Isaiah Young.

On the ensuing kickoff, Calexico fumbled at its own 30-yard-line and Gutierrez would capitalize with a quarterback-keeper on the next play to put Brawley up 16-0.

The Bulldogs then went three-and-out on their next possession and disaster struck on the punt attempt. A bad snap from center sailed over the head of punter David Rivera and Brawley recovered at the 4-yard-line. Young scored on the next play.

“Against a team like Brawley you cannot start slow as we did,” said first-year Calexico coach Fernando Solano. “Then we made a couple of mistakes on our side of the field and it just snowballed.”

The game went downhill for the Bulldogs from there as the Wildcat defense forced punts and Gutierrez threw touchdown passes to Nathan May and Daniel Camillo Jr.

Ironically, Solano pointed to last week’s 19-12 win over Southwest, Calexico’s first in eight tries, as part of the problem and not the solution.

“We have a young team and we are trying to set high expectations,” Solano said. “This week we worked on how to prepare for our next opponent after a win … something that they are not necessarily used to, and how to feel good about the win but move on to the next game.”

Another fumble recovery by Brawley set up a touchdown and the Bulldogs also surrendered a pick-six interception just before halftime.

Still, there was no quit from the basically young and feisty Bulldogs.

“We’re a young team and we are hoping to build up the program and grow as players and be a threat to the other Valley teams,” said sophomore running back and receiver Andres Ramirez. “Tonight I had the mindset to give 100 percent and make plays … I love football and the moment we had a season I was there.”

As the score mounted in Brawley’s favor, the uphill battle continued for Calexico under a new coach with limited time to prepare due to a pandemic and facing an established program.

“Traditionally speaking, we would have had spring practice and summer league, so we are trying to install an offense and defense in two weeks but keep our expectations reasonable,” Solano said.

For Esquer, who chose football over baseball, the losing is all part of getting the Bulldogs where they need to be.

“I choose football to get better for the next two seasons. It was more important for me to grow as a quarterback,” said Esquer, who completed 8-of-10 passes. “I feel like we grow when we lose, because our mistakes motivate us more in practice.”

Next up for the Bulldogs is a home IVL matchup against Imperial, set for 7 p.m. April 9. The Wildcats next travel to San Diego County to play Coronado High at 6 p.m. Thursday, April 8.