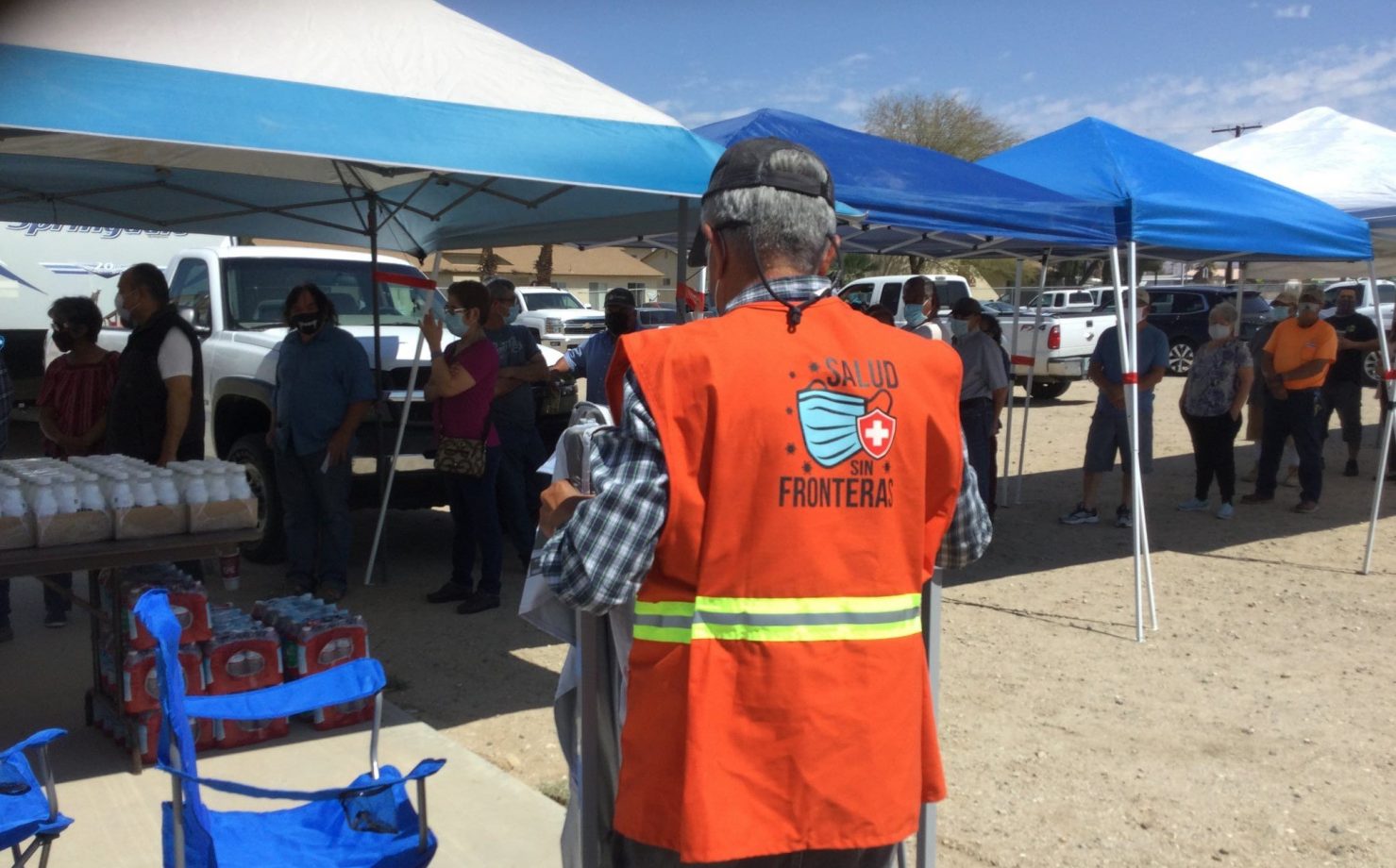 A volunteer with Salud Sin Fronteras looks on during a second-dose COVID-19 vaccination clinic in the Niland area on Thursday, April 1. Salud Sin Fronteras and its partners continue to lead the efforts locally to get farmworkers and food service sector workers vaccinated. | PHOTO COURTESY SALUD SIN FRONTERAS/ERIC REYES
Home
COVID-19
In COVID-19Regional News

CDC has eased some recommended restrictions for the fully vaccinated

Fully into the Easter weekend and spring break, with its pastel hues and bright colors, Imperial County continues to move backward a bit into the heart of the Red Tier and away from Orange, according to the metrics of the state’s Blueprint for a Safer Economy.

Late last week, Imperial County Public Health officials were hoping the region’s COVID-19 case counts and positivity rates would maintain their Orange-worthy levels for the required two consecutive weeks, but when the state released its county-level data on Tuesday, March 30, the county fell short one of three metrics: case counts per 100,000 residents.

It wasn’t something entirely unexpected by local public health officials, however.

“Three weeks ago, we opened a lot more (with the move from the Purple Tier to less-restrictive Red Tier); an increase was expected after doing such a move,” Imperial County Public Health Director Janette Angulo told this newspaper.

There is worry from public health officials that Easter and spring break will bring with it an even larger uptick in cases after about two weeks.

“We need to continue to evaluate our actions; engage in lower-risk activities and assess the level of risk we want to take. The virus is still with us. We’re still in a pandemic,” Angulo added.

For the week, the county had 5.4 new COVID cases per 100,000 residents, with the Orange criteria being 1 and 3.9 new cases. For the seven-day average for positivity rate (3.2 percent) and the health equity positivity rate (4.3 percent), Imperial County had still met the Orange metrics.

A closer look at the county’s daily data show cases had been on a slight upward trajectory since around March 19, when there were only 51 active cases. On Friday, April 2, the county was at 115 active COVID cases and had an unadjusted positivity rate of 7.97 percent.

Yet even as case counts and positivity rates rise, the increased proliferation of vaccination efforts locally and throughout the country had the U.S. Centers for Disease Control and Prevention recommending slight revisions to its public health advisories for travel and gatherings.

Expecting a flurry of travel plans over the next several days, on Friday, the CDC revised its recommendations for domestic and international travel.

“Fully vaccinated people can resume domestic travel and do not need to get tested before or after travel or self-quarantine after travel,” according to the CDC.

Further, “Fully vaccinated people do not need to get tested before leaving the United States (unless required by the destination) or self-quarantine after arriving back in the United States,” the CDC stated.

For Imperial County, although local and state health orders are still on the books limiting indoor gatherings to no more than three families and no more than 16 individuals, some restrictions have been given wiggle room for the fully vaccinated.

CDC considers the fully vaccinated having had two doses of either the Pfizer-BioNTech or Moderna vaccines or one dose of the Janssen/Johnson & Johnson vaccine, and at least 14 days after the last dose.

With 162 million doses of COVID vaccine administered in the United States as of Saturday morning, April 3, 18 percent of the country is considered fully vaccinated and 31.4 percent are considered partially vaccinated or have at least one dose of the two-step vaccines.

For Imperial County, 65,458 doses of vaccine had been given as of Friday morning, accounting for 12.54 percent of the population having been fully vaccinated and 21.61 percent being partially vaccinated.

Numerous vaccination events continued into Friday and Saturday with clinics continuing to focus on seniors 65 and older, educators, farmworkers and food service sector employees and other higher-risk groups. Salud Sin Fronteras, a coalition of social justice organizations focusing on ag laborers, has assisted in vaccinating 4,000 farmworkers in the past seven days.

During her weekly update on vaccination efforts, Angulo on Thursday shared that the number of available doses locally continue to hold a decent pace, with 83,840 doses received as of Wednesday, March 31. Some 6,110 second doses were still be delivered to the county as of Thursday. Just over 9,000 first doses (including one-shot Johnson & Johnson) were pending for next week. Announcements on second doses for the week usually don’t come until around Tuesday, Angulo said.

Not factoring into that count, which is strictly from the California Department of Public Health, is the doses coming to pharmacies throughout the county from the federal government. That number was not available Thursday, but with the federal allocation, local pharmacies through Walmart, Walgreens, Rite-Aid, CVS, Vons, Costco, and Good Neighbor Pharmacy were receiving doses.

Angulo said there are now more than 30 providers administering vaccine through Imperial County, some getting their allocations from county Public Health Department and some directly from the state’s third-party administrator, Blue Shield.

Despite the vaccination efforts, Angulo reminded the public Thursday that social distancing and masking protocols are still in place at the county level, and that to keep case counts from rising further, “I want to say to the community, stay vigilant, stay safe,” she added.