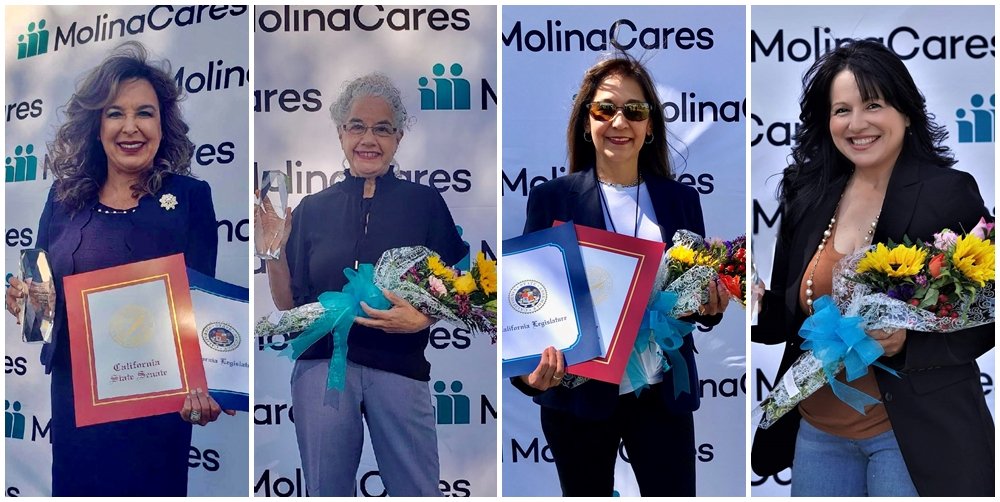 With the designation, which recognizes each awardee for their commitment to serving disadvantaged populations and improving health equity, MolinaCares provided a $5,000 grant to the nonprofit organization of each award winner’s choce.

The women were recognized at Bucklin Park in El Centro on Wednesday, March 31.

“The four incredible honorees have displayed their dedication to improving the comprehensive health and well-being of their neighbors in Imperial County,” said Abbie Totten, plan president of Molina Healthcare of California. “Molina is pleased to celebrate these selfless and deserving individuals. We know the grants will further empower the missions of the community organizations selected.”

Blanca E. Morales  immigrated from Mexicali when she was 6 years old and learned social responsibility at a young age, according to a MolinaCares press release.

As an 18-year-old single mother, she established Southern California Physician Services, which provides specialized patient financial services to hospitals and medical practices. Blanca has prioritized improving quality of life for people throughout Imperial County by helping provide comprehensive primary and specialty healthcare, regardless of a patient’s ability to pay, the release states.

Every aspect of Chaney’s career is geared toward making a positive difference. As the community outreach coordinator at El Centro Regional Medical Center, she provides exceptional assistance to everyone she interacts with, the release states.

When she is not working, Chaney is volunteering at the El Centro Community Center and caring for elders who need help at home. Throughout the COVID-19 pandemic, she led the center’s efforts in organizing sanitary necessities, along with supporting the mental health and wellness of members, according to the release.

Chaney has touched the lives of countless individuals with her skills, knowledge, and unwavering passion to serve others. Her grant will be donated to Southeastern California Conference of Seventh-Day Adventist.

Cardenas-Singh is a lifelong resident of Imperial County, where she has dedicated her career to improving the lives of disadvantaged populations, according to the release. She was elected to the El Centro City Council in 2020, a role in which she focuses on systemic changes related to health and economic justice, youth recreation, and community engagement.

As treasurer of Vo Neighborhood Medical Clinic, she raised $75,000 to help fund the “Meals to Heal Program,” which translated to more than 14,000 meals in the last eight months, the release states.

As president of MANA de Imperial Valley, Cardenas-Singh has volunteered more than 1,000 hours to help fund and develop career pathways for young women, raising thousands of dollars in scholarships. She will donate her grant to Court Appointed Special Advocates of Imperial County.

Peña began her service journey by volunteering with the Imperial County Office of Education’s after-school programs for at-risk children. In her current role as a social work counselor for the San Diego Regional Center, she is involved in countless efforts to better her community, the press release states.

In addition, Peña was involved in the “No Child Left Behind” and “Preschool for All” movements throughout the state of California for 22 years. Her grant will be donated to Dancing for a Dream Foundation Inc., according to the release.