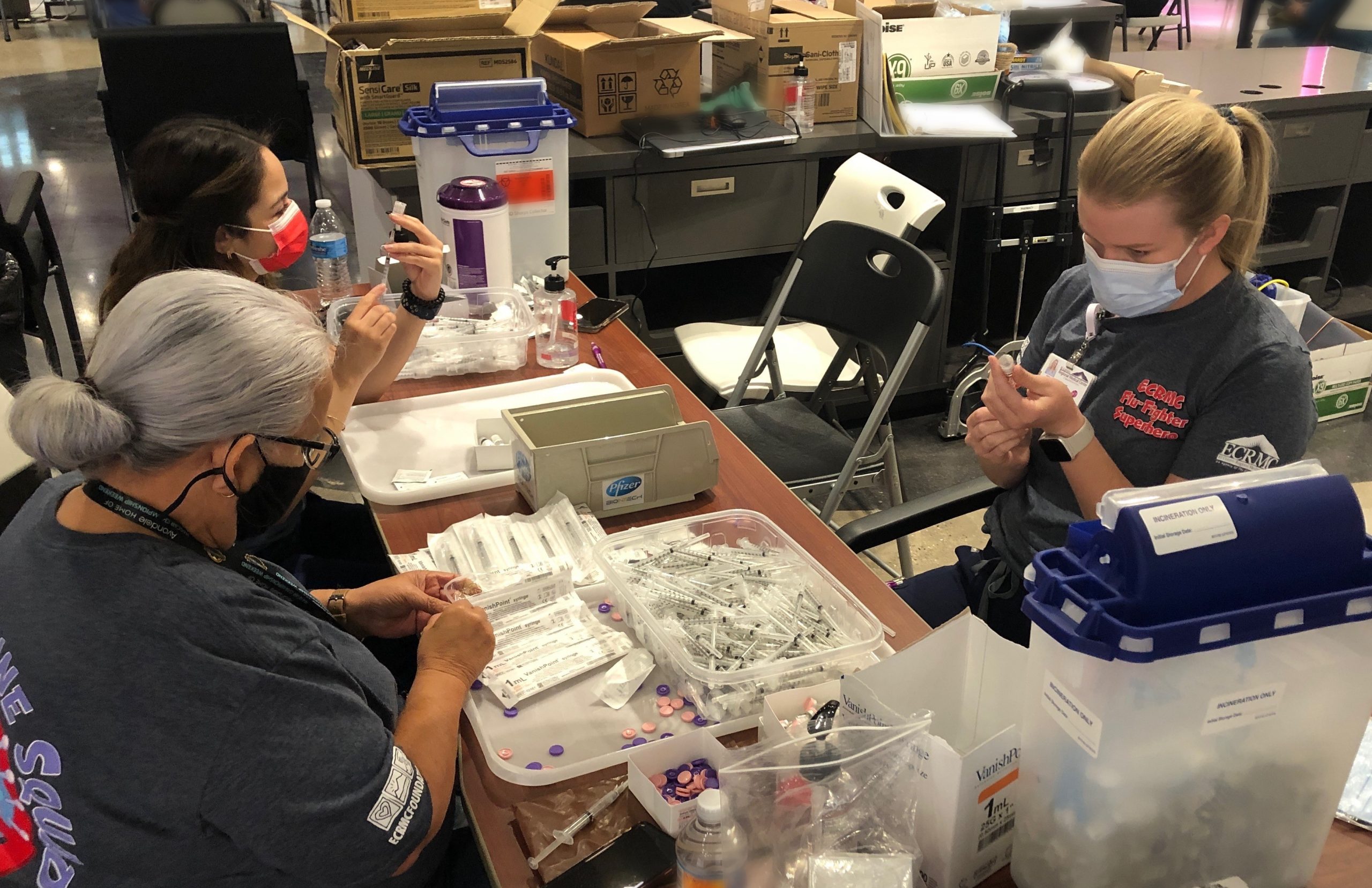 FLOW-VID? Floodgates on Vaccine, and Who Can Get it, Open Wide

Still abuzz about arriving at the Orange Tier earlier in the week — due to the state hitting a major marker for the inoculation of some of the most at-risk populations — county Public Health jumpstarted vaccination of all populations a week ahead of schedule.

Not waiting until the state’s prescribed start of April 15, county Public Health Director Janette Angulo opened the doors to all populations medically eligible to receive a dose to be able to do on Friday, April 9.

“This is with or without conditions. We made the decision earlier today (Thursday, April 8). We’ve already made contact with MyTurn(.ca.gov, the state’s vaccine portal) to ensure that the eligibility is open,” Angulo said Thursday. “We are not waiting for April 15 to come.”

Meanwhile, efforts to vaccinate essential and previously neglected subgroups like farmworkers, have seen increasing success in recent weeks thanks to the state directing mass shipments of doses directly to agencies and providers taking on the responsibility of making it happen, among them Pioneers Memorial Healthcare District and Dr. Tien Vo’s clinic through a close working partnership with Salud Sin Fronteras, a coalition of social justice organizations founded to address COVID-related health concerns among field workers.

In terms of opening vaccinations to all Imperial County residents, the expectation, Angulo said, “is those that are interested in receiving the vaccine, they’re going to sign up, whether it’s with the pharmacy, the county health Department, hospital, and more and more vaccine is going to become available. And, you know, by mid-summer or by the fall, the majority of our population is vaccinated. That’s the hope.”

Some of the decision announced at the state level on Tuesday, April 6, that many of California’s restrictions will be removed entirely (except for masking and social distancing) are being made not only on the assumption that more people are fully vaccinated, but also as an incentive to get more people to seek out the vaccine, Dr. Stephen Munday implied.

“We’re going to continue to try to really encourage people to get vaccinated because that’s the best way to protect them,” the Imperial County health officer said on Thursday.

Part of the state Public Health Department’s strategy in opening up and allowing larger gatherings of people to resume is “the hope that people will use that to their advantage and choose to get vaccinated,” Munday said.

“I agree with Janette, I think there are still many people that would like to get vaccinated who will now be eligible and will choose to do so, and we’ll continue to share the science and the effectiveness of the vaccine with them to try to encourage them,” he added, “because that is the best way to put the pandemic behind us.”

The first of the larger clinics opened to everyone 16 and older (the authorized age minimum for Pfizer-BioNTech doses; age 18 for Moderna and Janssen/Johnson & Johnson versions) on April 9 was at El Centro Regional Medical Center’s Community Education Center near the food court at the Imperial Valley Mall, ECRMC Chief Officer Louise Kenney said.

Imperial County, and other pockets around the country, are seeing a gradual increase in positive COVID-19 cases, some of which the U.S. Centers for Disease Control and Prevention this week attributed to nonvaccinated populations, generally younger people and more specifically those involved in close-quarter pursuits like youth sports.

On Friday, Imperial County was back up over 200 active COVID cases for the first time in several weeks, with some 80 active cases concentrated in the Calexico area and 60 active cases in El Centro. COVID-positive tests have been on a gradual rise since a low of 51 active cases on March 18.

The main reason Imperial Valley was able to move into the second-to-least restrictive Orange Tier on Wednesday, April 7, was due to the qualifying metrics being adjusted after the state hit a trigger point of 4 million people inoculated against the SARS-CoV-2 virus that causes COVID in some of California’s poorest and most disease-impacted zip codes, a dozen of which are in Imperial County.

In what has been a steep increase in vaccine delivered to Imperial County since early March, Angulo reported this week that 100,090 total doses had been received in Imperial County as of Thursday, with more than 12,500 doses of all three versions of vaccine due from the state next week.

Some 7,070 first doses and 5,440 second doses are scheduled to arrive, she said, adding that is only from the state and does not include the federal allocations being received locally through pharmacy and other programs.

Earlier in the week, the CDC reported that 80 percent of teachers across the country had been vaccinated as schools were set to resume in-person instruction in earnest following spring break.

The big story locally has been the major effort and heavy lifting by Imperial County Public Health, Pioneers district, and Dr. Vo, along with Salud Sin Fronteras, to focus vaccination efforts on not just farmworkers but on many others in outlying areas who might not have transportation to mass vaccination clinics in more central locations.

Public Health has focused on the central corridor of the county and parts farther east and west, Vo had focused on the south portion, and Pioneers has reached out to the north mostly, but has held onsite events at its Calexico clinic and mobile-based clinics in the city of Imperial and Holtville.

Since March 3, Pioneers has administered nearly 7,000 doses, including 4,368 through its mobile clinics, Kelley said on Friday. The remainder, he said, has been through stationary clinics in office space north of the hospital campus in Brawley and at Pioneers’ Calexico health center in the former Calexico Hospital building off Birch Avenue.

In mid-February, Pioneers was given approval to repurpose one of the emergency trailers provided to Imperial County by the state to establish the mobile team, which started on March 3 in Niland, Kelley said.

Early on a strong partnership had been forged with Comite Civico Del Valle in Brawley and Salud Sin Fronteras to focus on farmworkers. But, Kelley said, Salud Sin Fronteras has also gone above that mission in helping reach residents of far-flung communities like Niland, Bombay Beach and in other areas outside ag-only.

Salud Sin Fronteras, of which Comite Civico is a founding partner, has been a major player in having direct contact with the state to allocate doses for farmworkers specifically.

To that end, Kelley said Pioneers was allocated a total of 2,500 doses at the end of March in a use-it-or-lose it proposition, meaning that Pioneers and Salud Sin Fronteras had seven days between March 25 and April 1 to administer all 2,500 doses or it could be reallocated to other providers.

Kelley added 1,000 doses came through county Public Health, but 1,500 were directly delivered from the state for farmworkers.

“We moved from a limited supply to larger supply. Salud Sin Fronteras is making sure we are meeting equity metrics with pop-up clinics for maximum access. However, our goal now is to vaccinate all Imperial Valley quickly and efficiently,” said Comite Civico director Luis Olmedo.

“We continue our coordination with Imperial County health, Vo Medical, PMHD, Desert Pharmacy, and now Rite-Aid, who has partnered with Salud Sin Fronteras to get thousands of vaccines, giving us full access to reach the hard-to-reach communities,” Olmedo added.

Angulo said starting with a 1,000-dose mass vaccination clinic at Imperial Valley College in February for farmworkers, there has been a concerted effort to reach the farm labor community “in the field and at the shed.”

Kelley said PMHD and Salud Sin Fronteras have vaccinated field workers and other food workers at such varied locales as the parking lot at One World Beef Packers in Brawley, Sahara Packing in Brawley, Black Dog Farms in Holtville, and many other sites.

Although she has been asked on several occasions, Angulo has not been able to specifically pinpoint the total number of farmworkers that have been vaccinated so far, and others, including Salud Sin Fronteras, have not had that information readily available either.

Escalating COVID Cases and Beyond

When the latest county surveillance data were revealed Friday morning, it showed there were 220 active cases of COVID, up from 192 active cases just one day before. It’s been a sweeping increase in counts since March 18.

For week starting April 6, the state set Imperial County’s case rate per 100,000 residents at 5.4 new cases, a rate that would not have qualified the Valley for Orange just one week earlier, before the state adjusted it qualifying metrics based on reaching the 4-million-vaccine mark for some of the unhealthiest communities.

Angulo was asked on Friday whether the continued uptick in local cases has caused any concern that Imperial County could move backward and out of the Orange Tier.

“The section about moving back into a more restrictive tier reads as follows,” Angulo stated in an email to this newspaper, “during the weekly assessment, if a county’s adjusted case rate and test positivity has fallen within a more restrictive tier for two consecutive weekly periods, the state will review the most recent 10 days of data, including hospitalization data, and if CDPH determines there are objective signs of stability or improvement, the county may remain in the tier.

Meanwhile, local government officials on Thrsuday said the short-term and longer-term summer reopenings are signals that the worst is behind the county and the country.

“It brings back normalcy … This is over one year in individuals’ lives (that were) impacted,” he added. “It’s been tiring on all fronts.

“As we move into this next tier, I think there’s a lot of excitement. However, we just need to make sure we maintain out safety because we don’t want to revert to where we have been for … more than a year,” Rouhotas said.

Supervisor Ryan Kelley, fittingly, recited a passage from the serenity prayer in summing up lies ahead.