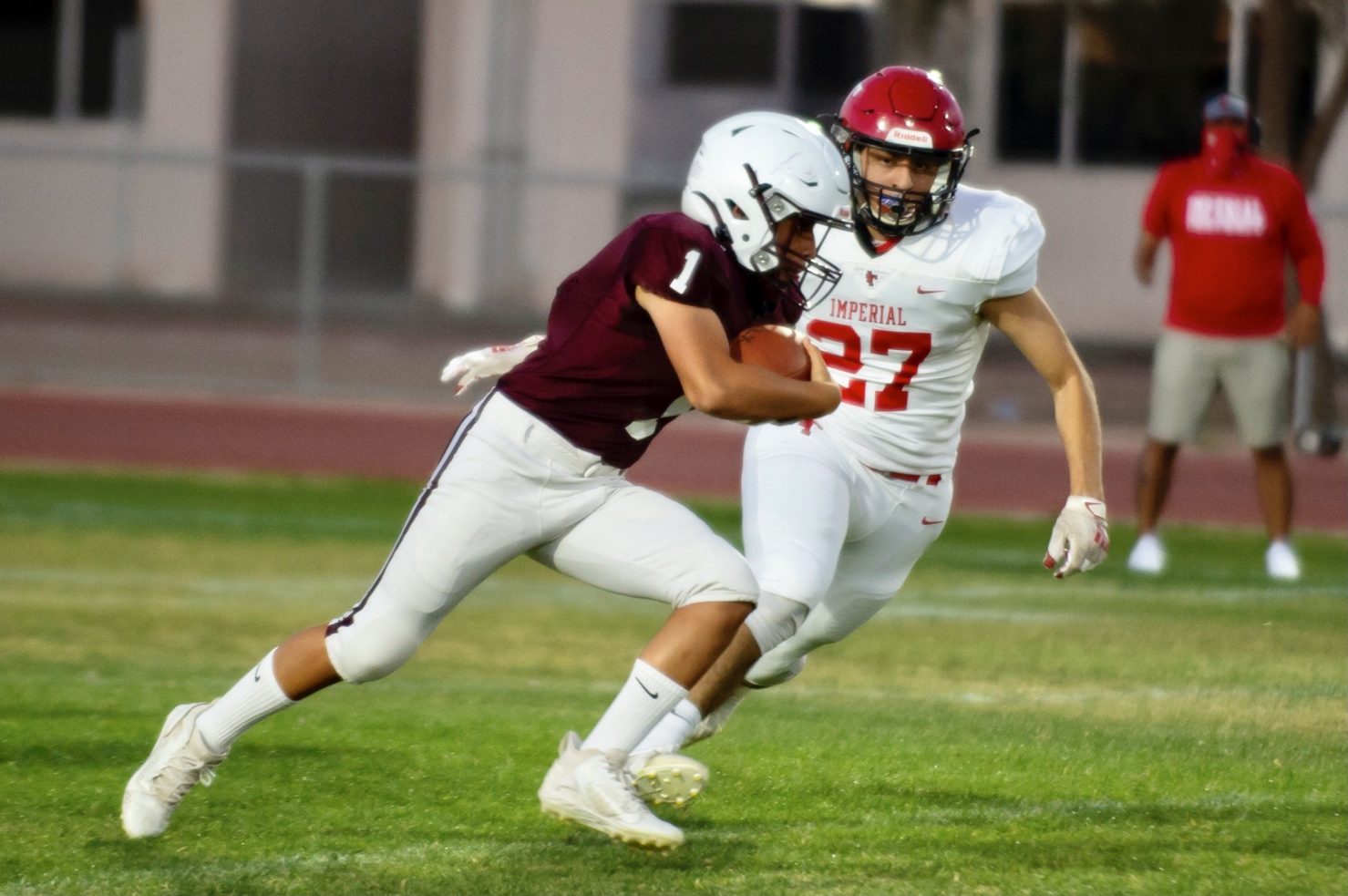 CALEXICO — The Imperial High School football team, led by a trio of seniors in quarterback Joaquin Alvarado and running backs Jovanny Escalante and Brennan Adams, was able to take advantage of mistakes and take down Calexico High School, 35-0, in an Imperial Valley League contest at Ward Field here Friday, April 9.

The Bulldogs (1-3 in IVL play and overall) started off strong with sophomore quarterback David Esquer completing several passes on the first drive to get Calexico across midfield. But that’s where the Tigers’ defense would stiffen and force the Bulldogs to punt.

Alvarado and Adams did most of the damage on Imperial’s first drive as the Tigers marched down the field and took a 7-0 lead with 7:02 left in the first quarter. This would be how most of the game would play out for Imperial (2-2 overall, 1-2 in the IVL).

“We need to correct our mistakes. We can’t allow one mistake to build up to another one,” said Fernando Solano, Calexico’s first-year head coach. “Our guys did a great job of battling considering we’re low on numbers and we don’t have a rotation going on because a lot of guys are battling injuries.”

Calexico continued to go 3-and-out most of the first half with the lone bright spot for the Bulldogs’ offense being sophomore running back David Rivera.

“I’m going to come back stronger next time,” Rivera said.

Defensively for the Bulldogs, linebacker Francisco Arreola led the team in tackles and was able to apply pressure to Alvarado when he stood in the pocket, forcing several incomplete passes.

Even with the early game mistakes, Imperial was only up two scores at halftime, leading 16-0.

Adams racked up three touchdowns on the evening and got consistent help on the ground from Escalante.

Calexico’s Eric Guerrero recovered a second-half fumble by the Tigers and returned it across midfield and into Imperial territory. But a quick 3-and-out ended any hopes of the Bulldogs getting on the scoreboard.

Next up for the Bulldogs is the annual “Battle for the Border” against crosstown rival Vincent Memorial Catholic High School. The game is set for 7 p.m. Friday, April 16, at Ward Field on the Calexico High School campus.

“We’re going to work their butts off on Monday and we’ll let the work speak for itself,” Solano said about preparing for the matchup against the Scots on Friday.

Next
FOOTBALL: ’Jackets Sting Scots with Big First Half