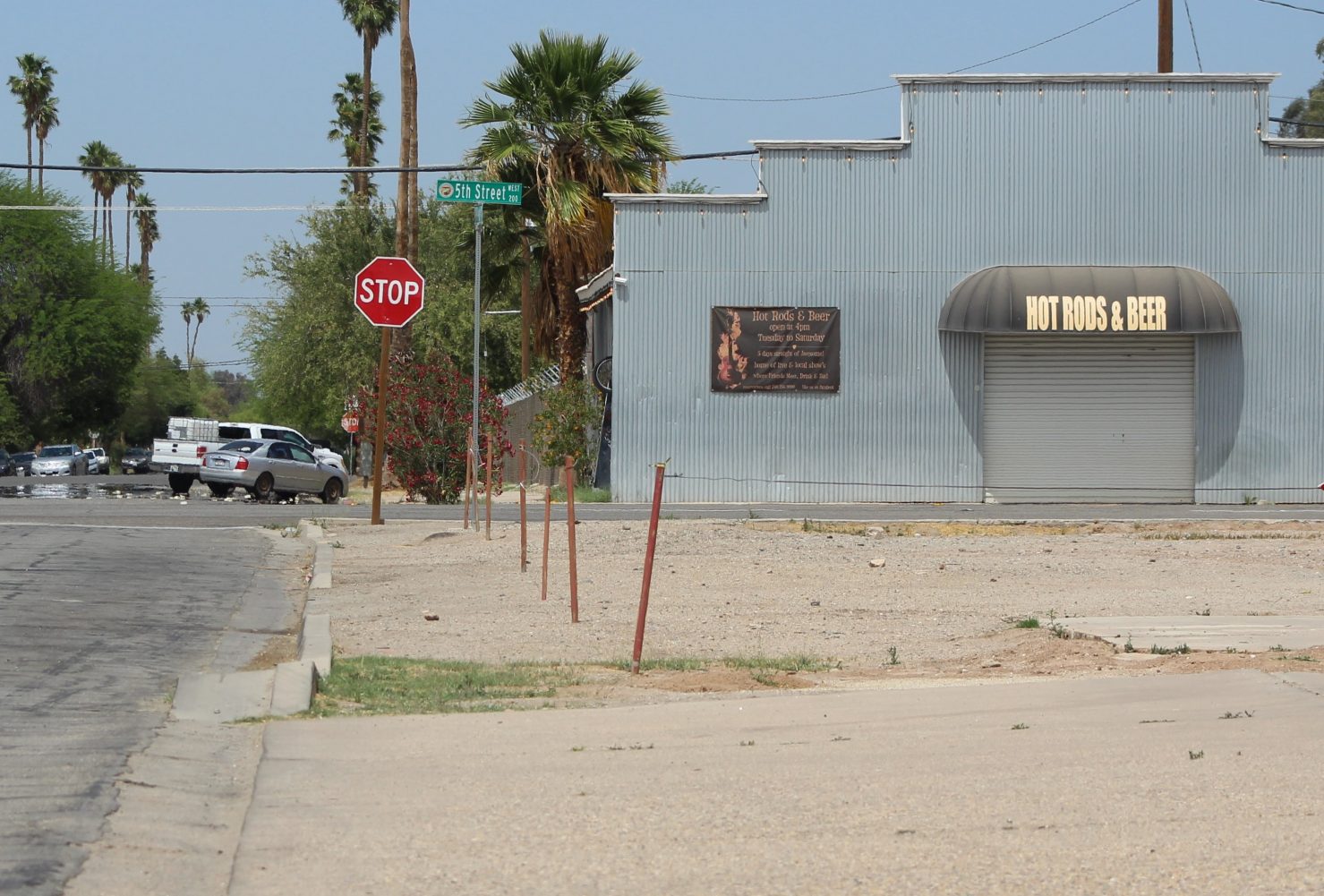 The 400 block of Cedar Avenue will be getting sidewalks, curbs, and gutters in the coming months. | CATHI PHILLIPS LARIOS PHOTO
Home
Local News
In Local News

HOLTVILLE — The Holtville City Council unanimously voted to authorize the city to advertise for bids for the Cedar Avenue sidewalk improvement project during its regular meeting on Monday, April 12.

The city has $338,000 available for the project, with $253,000 of those funds coming from the federal Congestion Mitigation and Air Quality improvement program (CMAQ), and the State-Local Partnership Program.

In a separate but related resolution, the council also voted to authorize the city manager or their designee to serve as the authorized signatory for all California Department of Transportation documents related to the project.

The proposed project will install driveways, curb, gutter, and sidewalk on the east side of Cedar between Fourth and Fifth streets. Currently, there is non-existent or deteriorated infrastructure on that segment of the street, while the west side of Cedar Avenue has a non-continuous sidewalk.

Plans call for the installation of two driveways at the rear of the Turning Point Ministries building. Segments of the curb between the two driveways and adjacent to the driveways will be painted red to discourage semi-trucks from parking and blocking the entrance and exit points, City Manager Nick Wells told the council.

Another driveway will be installed just north of the Turning Point building that will grant access to an existing but unoccupied building on Cedar Avenue, Wells said.

The city was also able to persuade the owner of the property at the southeast corner of Cedar and Fourth to agree to have two driveways installed, as well.

The city had suggested the driveways be installed along that segment of the roadway so that the truck drivers who park their semi-trucks in that empty lot, without the property owner’s permission, will not destroy the curb that will be constructed, Wells said.

“Rather than fighting nature we’re going to go ahead and put two driveways,” he said, “and hopefully they’ll restrict their incoming and outcoming to those driveways.”

Prior to approving the pair of resolutions, Mayor Mike Goodsell said that he hopes the planned infrastructure can help spur further development in the area.

During the City Council’s meeting on Monday, the council also voted unanimously to ratify a letter in opposition to Assembly Bill 1021.

Mayes had introduced a similar bill two years ago, but it failed to make it to the Assembly floor.

Although the IID board is comprised solely of Valley residents, an estimated 60 percent of IID’s electrical customers reside in Coachella.

The IID also has established an Energy Consumers Advisory Committee to be more responsive to the concerns of Coachella Valley ratepayers. The committee has 20 members, with half coming from each county.

Additionally, IID has a permanent office in La Quinta and holds public meetings in both Imperial and Coachella Valley.

Next
Barbara Worth Residents Express Concerns Over Migrant Housing