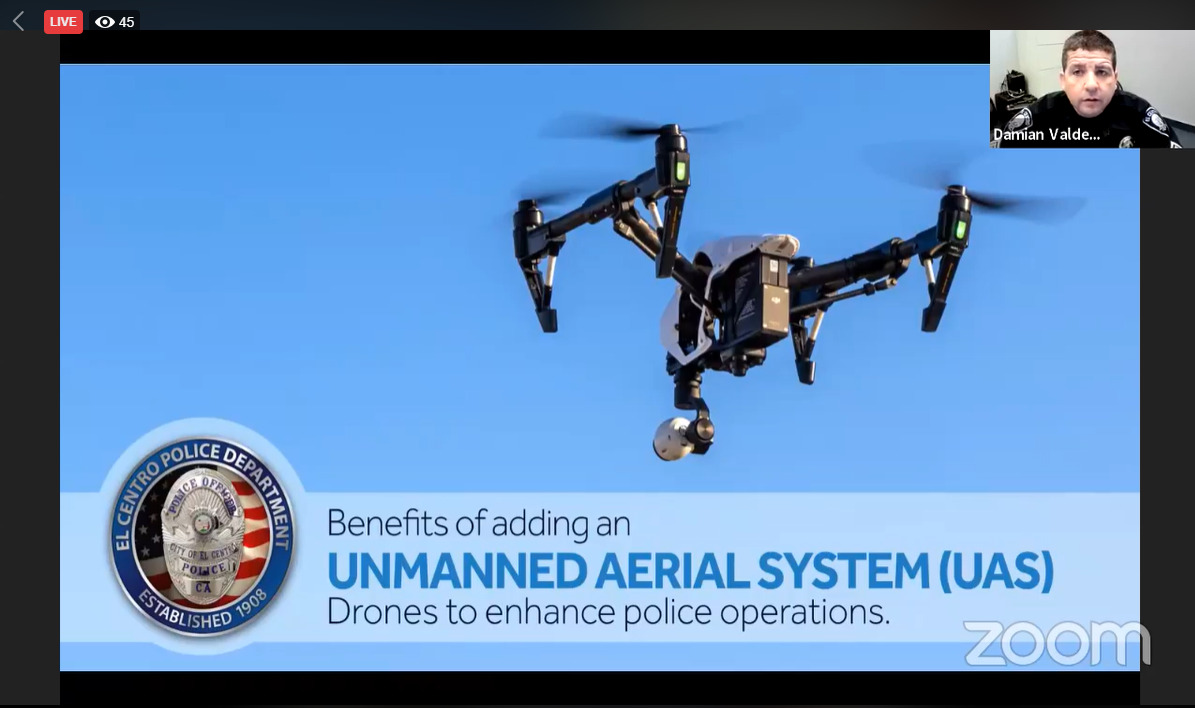 (This story was updated at 2:25 p.m. Monday, April 19 with additional information from the Imperial County Sheriff’s Office.)

EL CENTRO — Residents of El Centro are being encouraged to provide the El Centro Police Department with feedback about its proposal to implement an unmanned aerial system, commonly known as a drone program.

The department has been examining the possibility of adopting a drone program for nearly two years. It attributes its “cautious approach” to a desire to address any public concerns about the potential misuse of the technology for unlawful purposes.

Yet, the department has also acknowledged that it is “late to the table” to adopt an unmanned aerial system (UAS) program, in comparison to law enforcement agencies elsewhere.

“We see the urgency, because every day that we don’t have the drone program available to our officers in the field, it’s another day that they’re potentially at risk,” Deputy Chief Robert Sawyer said.

The department said it is expecting to deploy the drones during crime scene and major traffic collision investigations, searches for suspects in hard-to-reach and expansive areas, to help locate lost and elderly people who are reported missing, and identifying illegal homeless encampments.

Aside from law enforcement-related uses, El Centro Fire Department personnel are expected to be trained to use the drones, as well. The Fire Department could deploy the system to help identify hot spots during structure fires without placing personnel at risk.

The drones also could potentially aid the city’s public works personnel evaluate the integrity of infrastructure like water tanks and bridges in the wake of an earthquake, officials said.

Valdez offered assurances that the department’s program solely permits the use of drones for lawful “mission specific” purposes, prohibits random surveillance and will not be weaponized or equipped with facial recognition technology.

Drone-recorded video footage will be treated no differently than the electronic evidence that is collected by officers’ body-worn cameras, Valdez said, and made accessible solely on a “need-to-know, right-to-know basis.”

Additionally, the department’s drone policy was developed in accordance with the publicized recommendations of multiple civil liberty organizations.

“We’ve reviewed the concerns and we’ve tailored our policy to meet those concerns,” he said.

The department has not acquired any drones yet. It must first identify personnel to train to test pilot and evaluate different unmanned aerial system models and supporting software before any purchases are made. To begin that process, the department intends to apply for grants to hire a consultant and provide drone pilot training for department personnel.

Nor has the department determined how many drones it may purchase. It is anticipating spending about $25,000 or more to implement the drone program, Sawyer said.

Once implemented, the program will have ongoing expenses related to software, such as the maintenance of a registry that tracks drone deployment and video storage. Those costs are projected to range between $2,500 to $10,000 annually, depending on the type of drone model and software selected, Sawyer said.

He further indicated that the department does not plan on spending any of the city’s general fund monies.

Previous to Wednesday’s online discussion, the Police Department had presented its drone program proposal to the City Council on Oct. 20.

While members of the council did offer support for the proposed program at that time, they also requested that the department advise the public of its intention and solicit residents’ feedback in a public setting to help address any concerns the public may have.

Technically, the Police Department doesn’t need the City Council’s approval to implement a drone program, said Mayor Cheryl Viegas-Walker. The program is like any other that a city department and the city manager may choose to implement at their own discretion, she said.

But if the Police Department were to request any general fund monies for its drone program, it would require the council’s approval, Viegas-Walker said.

The fact that the department has kept the council informed of its plans and sought the public’s input is a welcome development for the council, she said.

Much of Wednesday’s 40-minute online discussion was given over to a question-and-answer session, where concerns about privacy and unlawful surveillance were a common refrain among community members who participated.

Any individual that is observed perpetrating a crime, even in their backyard, by drone operators while the drone is lawfully deployed could also be subject to arrest and prosecution, even if the drone was not originally deployed with that incident in mind, officials said.

Deputy Chief Sawyer likened a drone to a police helicopter and its ability to lawfully surveille, so long as the aircraft’s deployment was lawful in the first place and its use of airspace was not intrusive.

The drone’s deployment will be incident driven and require the approval of an on-duty supervisor or watch commander, as well.

“We know the importance of the public’s privacy and I’m confident that our policy addresses that,” Sawyer said.

In response to a community member’s question, the department reported that it does not intend to use drones to enforce COVID-related regulations, but that it may if the need arises.

The Police Department also disclosed that its drones would contain markings that would identify it as the property of the agency to help distinguish it from a drone belonging to a civilian.

When in use, a “spotter” will be assigned to assist the drone pilot with directing the drone and ensuring it remains within the airspace that it is permitted to operate in, which police officials said is limited to no more than 400 feet in elevation.

Once implemented, the El Centro Police Department would join the Imperial County Sheriff’s Office as the only local police agencies with unmanned aerial system programs. The Sheriff’s Office’s program has been in place since November 2019.

“From an administrative standpoint we have found the drones to be invaluable to our organization as well as our communities,” Chief Deputy Sheriff Robert Benavidez said in an email Thursday, April 15. “Their ability to provide officer and community safety while performing operations remains incomparable.”

Since ICSO implemented its program, it has conducted more than 60 missions that typically last two to three hours, depending on circumstances and need, Sgt. Rene McNish stated in an email Friday, April 16.

Most of the operations ranged from assisting another local agency, rescue efforts, evidence gathering, scene surveillance and demonstrations.

“Currently, the ICSO (small) UAS program has completed approximately (12) mutual agency assist requests and we have assisted in search and rescue missions in all areas of our county, cities and townships,” McNish said. “We also assist with suspect apprehensions, fire department assessments, tactical missions and crime scene analysis.”

The number of Sheriff’s Office personnel trained to pilot the drones has grown significantly from just two at the outset to 17 trained pilots, McNish said.

To become a drone pilot, Sheriff’s Office personnel were required to complete a 40-hour training program and attend monthly training to maintain their proficiency.

The Sheriff’s Office has a confidential process by which members of the public can submit any complaints related to the agency’s drone use. Because of the confidential nature of that process, McNish said he was not aware of whether any complaints may have been filed.

Among the agency’s multiple and successful unmanned aerial system deployments, its use to assist in the wake of the destructive June 28 fire in Niland stands out for McNish.

The agency’s drone system was deployed to help the Imperial County Fire Department perform an aerial assessment to complete the Fire Department’s survey of the damage.

“By providing County fire with immediate access to aerial footage at a moment’s notice on multiple occasions, ICSO was able to expedite the completion of that survey to begin the rebuilding stages for many displaced families,” McNish said.

The second virtual forum will be at 2 p.m. April 24 and can be accessed on Zoom or on the department’s Facebook page. Community members are also encouraged to submit any feedback to the department regarding the drone program by emailing publicinfo@cityofelcentro.org