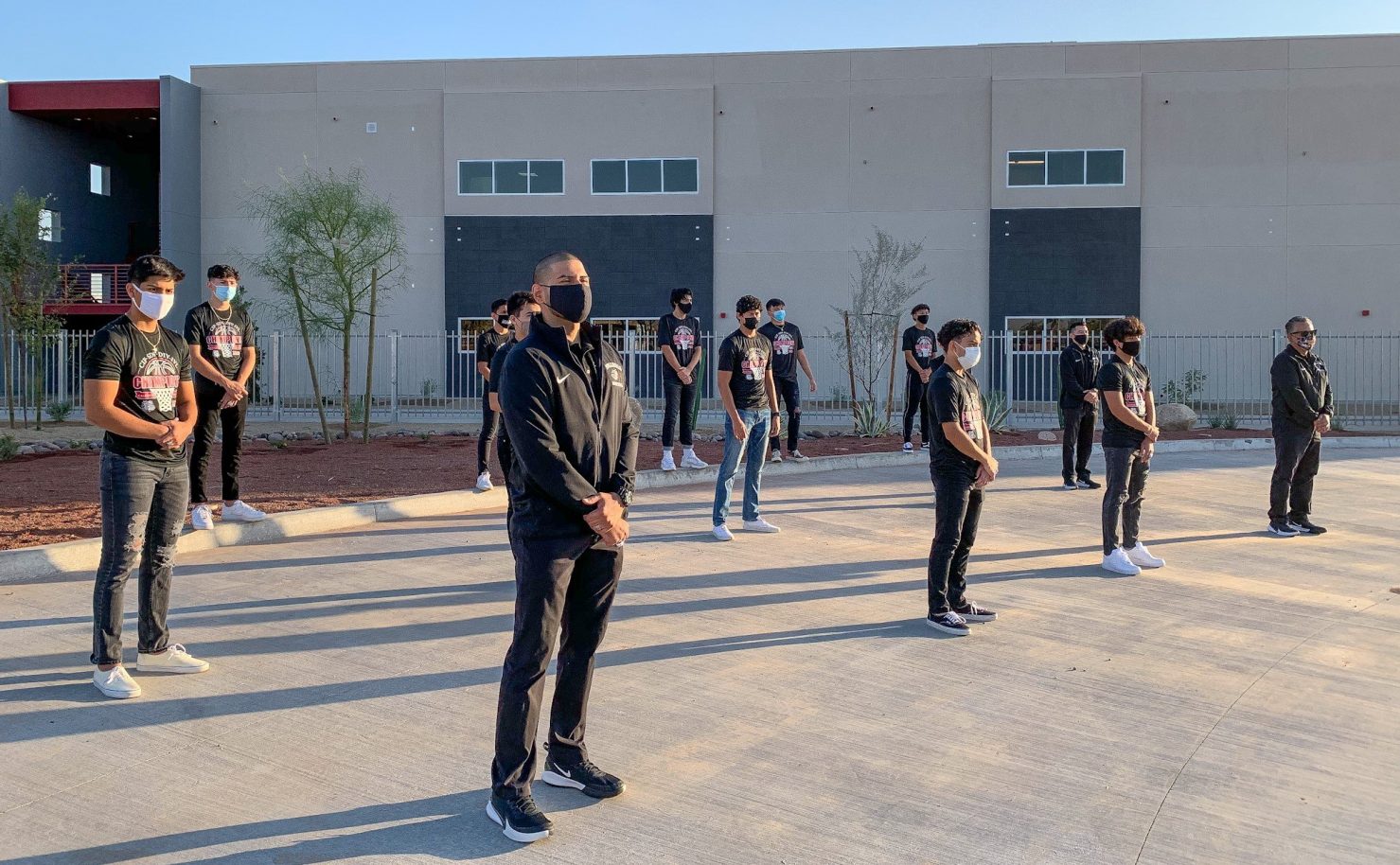 Calexico, Holtville, Brawley and Palo Verde high schools are ready to roll next week, while others remain undecided

CALEXICO — Cuauhtemoc Beltran, like many parents of players on the 2020 CIF-San Diego Section Division IV championship Calexico High School boys’ basketball squad, wondered if his son would ever get a chance to defend his title.

It was just weeks after the Bulldogs won the division crown in a 70-57 victory over El Capitan in San Diego on Feb. 28 when COVID-19 shut down life as then-16-year-old sophomore Julian Beltran and his teammates knew it.

Public schoolchildren all over the Valley were sent home for distance learning, all sports ceased, and, for the Calexico boys’ hoopsters, at least, they couldn’t even celebrate their Cinderella season with all the fanfare that such a distinction should have garnered.

Although the pandemic put to a stop to any school assembly or parade through Calexico’s streets, eventually the Bulldog boys took part in a socially distanced ceremony for only school officials and parents in front of the high school, receiving their championship rings some eight months later, in mid-November.

Yet, such concessions were little consolation as the days and months ticked on and Julian’s dad, known as “Temo,” saw the emotional and social toll the pandemic and no athletic pursuits were putting on his son.

Now, Julian Beltran, 17 and a junior, and his teammates will get their shot at hitting the hardwood on Monday, April 19, after the Calexico Unified School District on Friday evening, April 16, announced the return of indoor sports in the district via the superintendent’s weekly email to parents and community members.

“Honestly, I’m very excited; borderline emotional. I see how this has affected my son. He looks forward to going to practice, seeing his friends, going to tournaments,” Temo said earlier this week after being told indoor sports were on the verge of resuming, even as he and parents had yet to hear official confirmation.

“I hope that the school district or the powers that be are doing everything possible to open up indoor sports. The kids need that, they need some normalcy back in their lives. … It’s affecting their social and emotional well-being,” Temo said on Monday night, April 12, adding his son had experienced anxiety during the pandemic.

A few days later, around Wednesday, April 14, a Calexico Unified School District board member would call Beltran to inform him that basketball would be resuming.

“I’m so happy,” Temo said on Friday night while on the road driving.

Still, Beltran still did not have any details on when or how the season would progress, surprised to hear the announcement had been made in an email, rather than directly from school officials.

It’s pretty much how the past several weeks have played out for Beltran and his son, and the rest of the team — and parents of high school basketball players and wrestlers all over the Imperial Valley — as the flow of information regarding the return of indoor sports has been a mixed bag of coaches hearing one thing from their athletic directors, ADs hearing something else from their superintendents, and superintendents passing the buck onto the Imperial County Public Health Department over the rules to return to practice and competition.

Sadly, though, it’s still unclear what happened from yesterday to today, as Public Health officials state they have never wavered in their interpretation of state guidance on indoor sports in the wake of a March 4 settlement over a lawsuit filed in San Diego County Superior Court that cleared the way for moderate- to high-contact indoor sports.

Due to the proliferation of COVID in indoor settings, a court said indoor sports could resume for schools, no matter what tier that California county happened to be in, so long as the school abided by the regulations set forth by the NCAA for indoor sports, that is, frequent and reoccurring COVID testing.

It’s a requirement that Vincent Memorial Catholic High School in Calexico, as the county’s only private school with competitive sports teams, didn’t seem to have an issue with, resuming its indoor sports programs like girls’ and boys’ basketball some weeks ago with a testing regimen under Dr. Tien Vo.

Vincent Memorial girls’ basketball coach and athletic director Jesus Gonzalez said his team gets tested weekly at Vo’s clinic in Calexico. His girls have already played three games in the San Diego area and his boys’ program got started the week of April 12.

Brawley Union High School District has reportedly purchased 1,000 test kits and will be testing its own students. The high school is said to be starting practices on Monday.

It wasn’t immediately available whether the Central Union, Imperial Unified or Calipatria Unified high school districts will be participating in indoor sports.

“Schools/teams are responsible for ensuring that the proper measures and plans are in place. These plans are not required to be submitted to the local health department. What is required is that schools report positive student and staff cases to the Public Health Department,” stated Imperial County Public Health Director Janette Angulo on April 16 after she was asked to clarify the rules amid the ongoing drips and drabs of information coming from different camps of coaches, ADs, and superintendents.

Angulo stated the implication that Public Health has ever given mixed signals or changing information regarding testing is not true, considering her department and Health Officer, Dr. Stephen Munday, have stuck to the letter of the state’s guidance, and its specific caveats.

Part of the problematic flow of information is what led Temo Beltran to first contact this newspaper on March 25, when he said one of his co-workers was told the indoor sports season had been canceled because of “Dr. Munday.”

From that point on, it has been a mix of misinformation and passing the buck for Beltran and parents — and members of the media, truth be told — over when and whether indoor sports would resume.

Beltran was particularly troubled by how updates and news was making it back to him and his fellow Bulldog basketball parents.

A team schedule made its way to parents and players with the first game planned for April 27 before there was even a commitment to a season, Beltran said.

Not knowing is what prompted a signed letter from Temo and some parents to Calexico High Principal Gabrielle Williams-Ballesteros, Calexico Unified Superintendent Carlos Gonzales, and members of the Calexico Unified Board of Trustees asking for answers and, ultimately, offering any help they could provide just to get the season going.

Knowing that COVID testing was a sticking point — state guidance requires either daily antigen testing or PCR (swab) testing 48 hours prior to competition and at least twice a week — Beltran said parents offered to transport the players to clinics or places to be tested.

“They have our full support. If they need help to get kids tested, we’re willing to do our part,” Temo said on April 12.

Calexico’s announcement that indoor sports would resume next week isn’t surprising, as it was bound to happen as more parents all over the Valley asked — and pressured — their superintendents, school board members, ADs, and coaches to answer or clarify what was happening.

This newspaper sought an update on the status of indoor sports from the district on Tuesday, April 13.

“CUSD is interested in beginning indoor sports. We are currently working on completing the Return to Play-Health and Safety Sports Plan for CUSD athletics, which will include the most recent guidelines on indoor sports participation, conditioning, and competitions,” according to a written statement attributed to Superintendent Gonzales. “Although Imperial County is now in the Orange Tier, we must still consider all safety precautions. There are still questions that must be considered regarding student participation in multiple sports and the need for COVID testing. We look forward to creating an indoor sports program as soon as possible.”

The update released by the district on Friday evening states that starting April 19, indoor sports conditioning and competition can begin for boys’ and girls’ basketball, wrestling, and volleyball, although for volleyball it is for conditioning only.

With specific dates tied to the conclusion of certain sports by CIF-San Diego Section, volleyball for the section wrapped up competitive play on April 3. Brawley Union High School Superintendent Simon Canalez, who sits on the CIF-SDS executive board, said last week that an “inter-mural” volleyball season for local teams is being considered.

Further information on specific team schedules for practice is to be distributed on Monday, according to the announcement.

COVID testing looks to be the responsibility of parents and players, according to Calexico Unified’s message:

“All indoor sports participants will be required to provide a weekly copy of COVID-19 test results. We have currently scheduled with Dr. Tien Vo to provide free COVID-19 testing. Specific information will be provided to the coaches and the athletes,” according to the district’s announcement.

“Currently, students may participate in two sports within the same season. Students who are enrolled in an indoor sport will need to be COVID-19 tested weekly,” the statement continues.

Although Temo Beltran’s issue with the school district is a moot point now, at the time when he and parents drafted the letter, when information and answers were scarce, the message was clear.

“If they don’t open up indoor sports, I hope the reason is not that it’s a logistical nightmare … COVID has affected everyone. … The kids need something to enjoy,” Beltran said.

Previous
Brigadettes Change It Up with First Ranch Ride