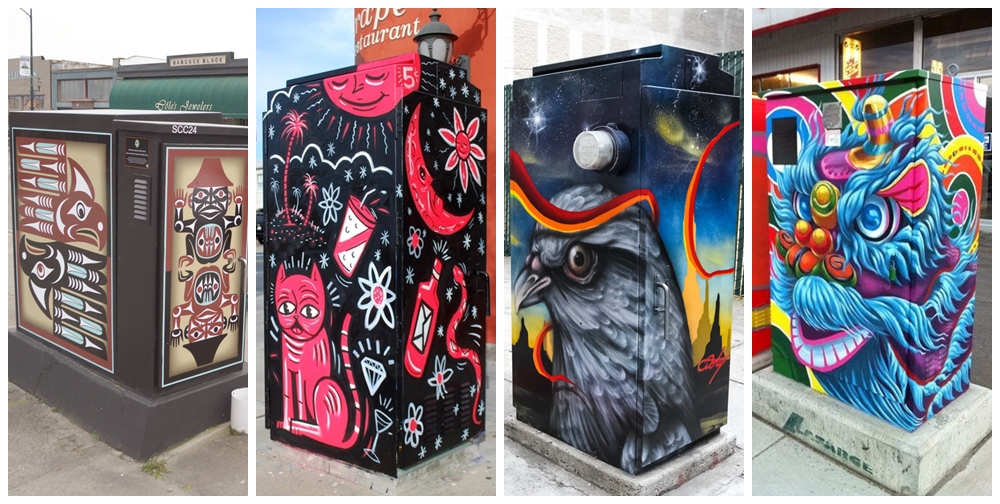 Utility boxes in various California cities are on display, and in about six months, will be in El Centro as well. The El Centro City Council on Tuesday, April 20, approved using a $25,000 Community Development Block Grant to seed its own utility-box art program. | COURTESY PHOTOS
Home
Regional News
In Regional News

EL CENTRO — Admittedly, it’s probably one of the last things one would notice on their drive to work or from home, but El Centro is set to beautify a forgotten part of the traffic light experience.

“I think this would be a way to get the community engaged in art and photography. The policy is open to art, it just has to be able to be digitized,” El Centro Community Services Department Director Adriana Nava explained during a City Council meeting on Tuesday, April 20.

The program, which focuses on beautification efforts, also would coincide “with the graffiti abatement program,” Nava added.

California cities have taken such a shine to similar programs that some city’s even have their own program websites specifically to show off local artists’ creations.

El Centro City Council unanimously approved the creation of the program on Tuesday, and all expressed interest in seeing local artists contribute to the projects around the city in the months to come. The project would cover most of the city within the CDBG grant area, mostly north of Interstate 8 and focused on the inner-city pathways, according to city staff.

City Council member Sylvia Marroquin recommended reaching out to local high schools, nonprofit organizations, and the like to help engage youths of the city and inspire ownership.

The program, which aims to get underway in about six months, has inspired the city to reach out to the local art community to remodel the otherwise unnoticeable eyesores.

“Hopefully, this helps us with the graffiti crew. It helps that the problem isn’t as intense, they’ll just be able to wipe (the surfaces of the vinyl-coated boxes if they are tagged),” Nava added.

The funds would be used to take the art that is created, digitize it, print it on vinyl, and wrap the boxes in that vinyl sheeting, which Nava said would have five to seven years of durability. In addition to combatting graffiti, the process would protect the art against the elements like the sun and heat of the Imperial Valley.

“Usually, if you have a traffic light,” Nava said, “you can look around the corner, they’ll be there.”

The idea would be that the El Centro Library and Community Services board would go through the submissions from artists and students and select pieces from there.

In other city business, the El Centro City Council voted unanimously to extend a memorandum of understanding with Imperial Valley College through June 30, 2023.

IVC, through the MOU, provides classes to the community at El Centro facilities. The current MOU was to expire in July.

“This has been a hit among our senior population,” Nava said. “However, all adults can take the class; it’s a noncredit class.”

The coursework, focused on exercise and nutrition, would be taught by a beloved past instructor, Nava added, and there would be a requirement of at least 20 people enrolled per class to make it viable.

Similar MOUs have been executed, mostly recently with the city of Calexico for use its community center.

Next
Viral ‘Princesa’ Wants to Show ‘Love for the Valley’