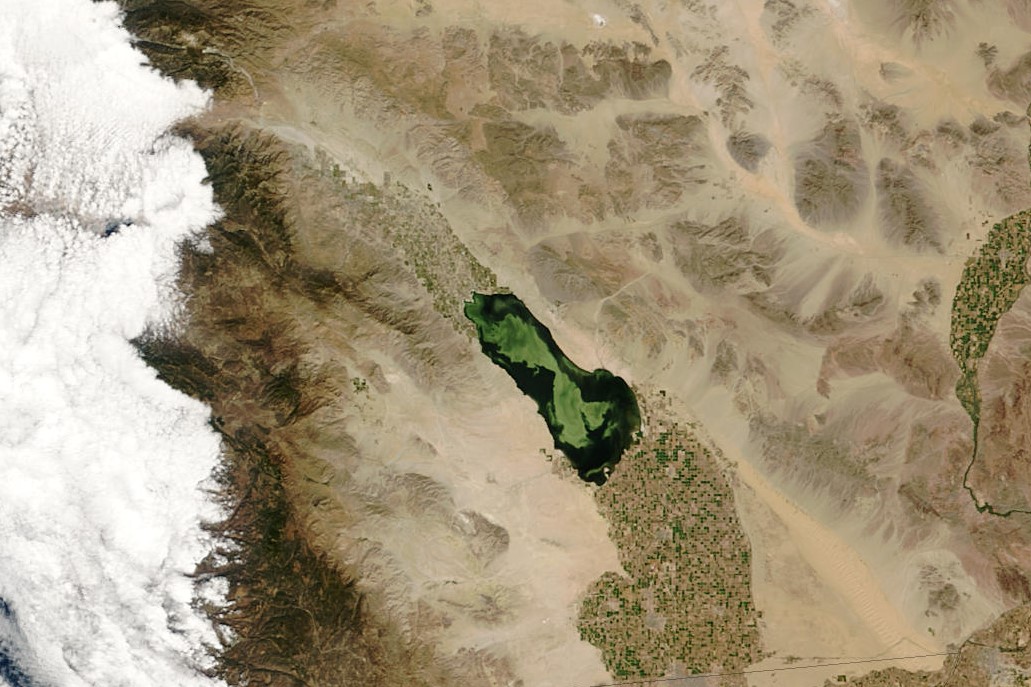 A NASA satellite image over the Salton Sea shows algae (green patches) blooming in the water. A recent cyanobacteria bloom at the sea has state officials warning against going into the waters. | COURTESY IMAGE
Home
Regional News
In Regional News

SALTON SEA — Due to a toxic algae outbreak at the Salton Sea, people and their pets are being urged to avoid exposure to the water, the California State Water Resources Control Board reported on Friday, April 23.

Officials said that patches of toxic cyanobacteria have been discovered at numerous sites in the sea, and a dog recently died after swimming in the water.

“Cyanobacteria harmful algal blooms can affect the skin, liver and nervous system of people and of dogs and livestock,” the state water board said.

“They’ve been around on earth for millions and billions of years but the cyanobacteria, they can produce toxins which are harmful to pets and animals,” Keith Bouma-Gregson, an environmental scientist with state water board, told a Palm Springs news station on Monday.

Although reports of animals dying after coming in contact with water from the Salton Sea are not common, the Palm Spring station reported it would not be the first time cyanobacteria has caused illness.

“The regional board does monitoring at six sites in the Salton Sea on a monthly basis. But in this case, we were notified by a dog owner on April 19 of a dog incident that happened a few weeks prior,” Bouma-Gregson stated in the report.

Frank Ruiz, Salton Sea director with Audubon California, told the NBC station: “We have seen cases affecting not just people that come in contact with the water. One case was in the 2000s that was recorded in the Chesapeake Bay where hundreds of thousands of birds died as a result of being exposed to cyanobacteria.

As a precaution, visitors were urged not to swim in the water, or let their pets enter the water, or eat algal mats scattered about the shoreline, according to the state water board warning.

Visitors were also urged not use any Salton Sea water for drinking or cooking. Boiling and filtering will not make the water safe, officials said.

Anglers who catch fish in the water were asked to discard the guts and thoroughly clean any fillets from fish with tap water or bottled water before consuming.

Any illnesses connected to the harmful algal blooms should be reported to the health departments in either Riverside or Imperial counties. Illnesses should also be reported by email to the state water board at cyanoHAB.reports@waterboards.ca.gov.

The Salton Sea Management Program is finalizing a contract with the University of California, Santa Cruz to perform an independent feasibility assessment of water importation strategies for the Salton Sea, according to an April 6 press release.

UC Santa Cruz will convene an independent expert panel to review 11 water importation concepts submitted to the state in 2018, assess their technical and economic feasibility, and evaluate the overall viability of water importation as a long-term strategy for restoration of the Salton Sea, according to a report from the state.

The panel will be supported by an analytical team led by Dr. Brent Haddad, professor of environmental studies at UC Santa Cruz.

The work is expected to get underway by June 1 and conclude by summer 2022.

“UC Santa Cruz has significant experience facilitating independent technical panels, and we are excited with the multidisciplinary approach they will take on this project,” said Arturo Delgado, assistant secretary for Salton Sea policy at the California Natural Resources Agency. “We look forward to getting them officially on board so this work can get underway.”

One of the first tasks for UC Santa Cruz will be to develop a detailed work plan for performing the feasibility assessment. Further details will be available in coming weeks.

The feasibility analysis of water importation concepts will be a key input for the long-range plan the SSMP is required to develop and submit to the State Water Resources Control Board, according to the release.

Public engagement to launch development of the long-range plan will begin — concurrently with dependent review of water importation proposals — in the coming months.

The long-range plan, which is due by the end of 2022, will establish a strategy for long-term restoration of the Salton Sea beyond the SSMP’s Phase I: 10-Year Plan currently being implemented. Options evaluated to inform the long-range plan will include project build-out based on projected future water inflows within the Salton Sea watershed, as well as water importation for a whole-sea alternative if importation is found to be feasible, the release stated.

The executive summary of the 2021 annual report on the Salton Sea Management Program is now available in Spanish.

Find the Informe anual 2021 resumen ejecutivo on the SSMP home page along with other updates and recent documents. A Spanish translation of the full report is expected soon.