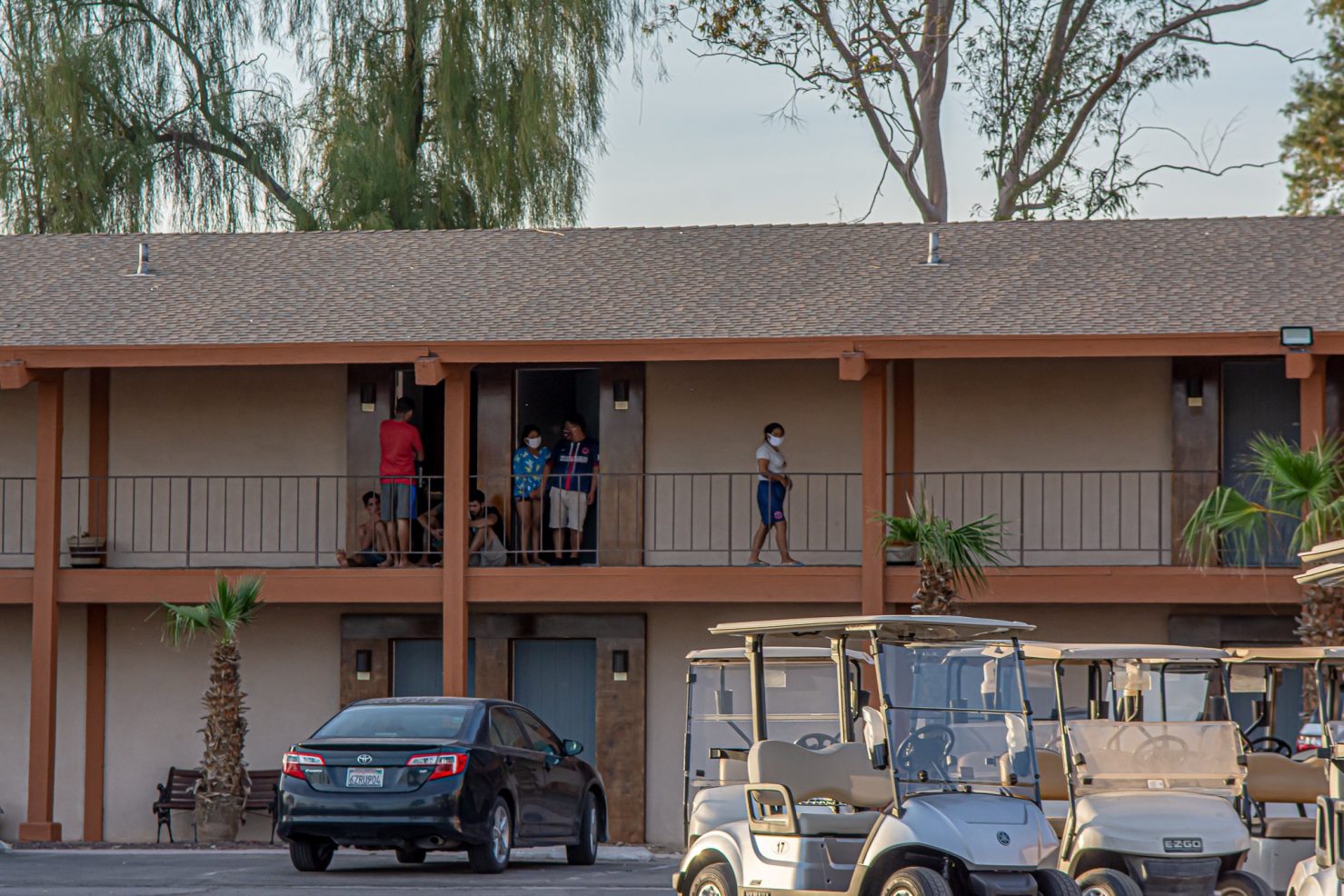 Migrants seeking asylum in the United States are apparently still being temporarily housed at the Ramada hotel at Barbara Worth Country Club in Holtville as a quarantine measure for potential COVID-19 exposure. Several could be seen congregating outside their rooms in this photo from April. | CAMILO GARCIA JR. PHOTO
Home
Local News
In Local News

HOLTVILLE — The state Department of General Services recently notified County Executive Officer Tony Rouhotas Jr. that the agency intends to pay the transient occupancy tax related to the state’s temporary housing of migrants at a pair of local hotels.

Prior to the state’s notification, there had been some question about whether the agency intended to pay the transient occupancy tax for the temporary housing of asylum seekers being released into the county by federal officials.

A transient occupancy tax, also known as a “bed tax,” is imposed on the overall cost of renting a room at local hotels and motels for guests that stay fewer than 30 days. The city of El Centro has a 10 percent tax, while the county has an 8 percent tax.

The state Department of General Services has contracted with the Ramada by Wyndham Hotel at the Barbara Worth Country Club, located on unincorporated county land outside of Holtville, and the Travelodge by Wyndham El Centro, located within that city’s limits, to house scores of migrants through June 30.

The county had initially indicated it intended to review the quarterly “TOT Return” form that the Ramada hotel operator is expected to file with the county by July 31 to determine whether the TOT would be forthcoming from that hotel’s contract with the state.

Instead, that determination was provided in an email by a Department of General Services (DGS) representative who contacted Rouhotas last week to inform him that the state would pay the TOT for all contracted rooms, said Gilbert Rebollar, county public information officer.

“The County will discuss with Counsel and our Treasurer-Tax Collector’s Office on next steps,” Rebollar stated in an email on Tuesday, April 27.

El Centro Mayor Cheryl Viegas-Walker said that Rouhotas informed the city of El Centro on Friday, April 23 of the state’s intention to pay all the TOT for all contracted rooms. Yet, she said she had not seen anything in writing regarding the matter as of Monday, April 26.

During the City Council’s meeting of April 20, Viegas-Walker had expressed uncertainty about whether the city would be able to collect the TOT from the state. The potential loss of the TOT was concerning for the city, she said, especially since the Travelodge was restricting the rental of its rooms to traditional customers and reserving them instead for the migrants.

During the meeting, the City Council expressed its support for potentially sending a letter to state officials demanding payment of the TOT.

The two local hotels are part of four sites being contracted by the DGS to temporarily house migrants in Imperial and San Diego counties as part of the state’s Statewide Travel Program and Asylum Seekers Program, a DGS spokesperson said.

Next
SALTON SEA BRIEFS: Dog Dies After Swim in Water