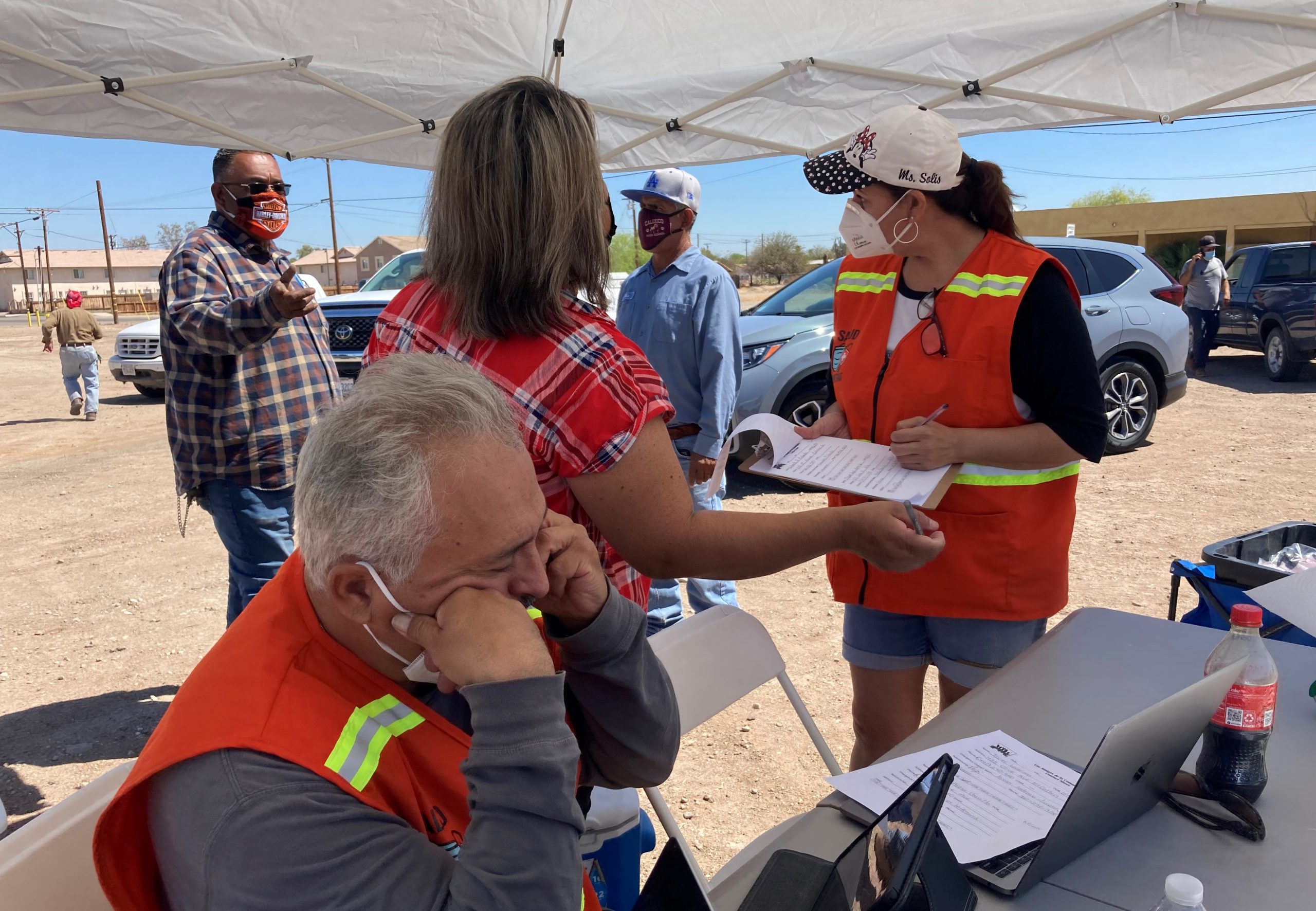 Eric Reyes (foreground left on phone) of Amigos De La Comunidad, one of the social justice groups that make up Salud Sin Fronteras, helps register members of the Seeley community to get vaccinated against the virus that causes COVID-19 on April 17. Salud Sin Fronteras is a grassroots organization that has directly reached out and recruited as many 3,700 farmworkers and other residents in hard-to-reach communities. | PHOTO COURTESY OF SALUD SIN FRONTERAS
In COVID-19Featured StoriesRegional News

“People develop their sense of reality from social interaction, what your friends tell you and what you believe collectively. They’re different groups getting different reasons to be suspicious, so a blanket messaging that tells people what they already know (about getting vaccinated) … is not going to penetrate these deep reasons for distrust,” Flores added.

Across Imperial County people generally agree there are hierarchies to that distrust, some of which are faith-based, some a lack of accurate information, fear and anxiety, and some, just plain political leanings.

Flores and his sister, Daniela, who spoke with this newspaper at length on Monday afternoon, April 26, said politics is an area where they won’t venture, but reaching people through their social circles and working through innate biases is key to moving the needle on vaccine efforts.

To do that, individuals must be reached on a granular level.

Success will depend on “going local, both geographically but also ideologically, socially going local,” Luis Flores said, adding that it will be up to community leaders to win the hearts and minds of people, targeting various groups with laser precision like “church communities, gym cultures, youth cultures,” for example.

Imperial County Public Health Department officials agree. While they are not abandoning messaging strategies that have been used to vaccinate people early on, there is acknowledgement that an added layer is needed by asking people in focus groups why they are resistant to being vaccinated.

“It’s not just Public Health, but many providers are looking at nontraditional ways to reach the community … they’re going out trying to make it easy and accessible for our community. For sure we haven’t thought of every single idea, every single strategy, (but) since last week we started re-strategizing because of the trend that we were seeing,” Public Health Director Janette Angulo said on Tuesday, April 27 during her weekly report to the county Board of Supervisors.

“We will explore, we are exploring; there’s more that needs to be done,” she said.

To that end, Imperial County District 4 Supervisor Ryan Kelley sees the mix of new and old as an effective way to reach people about vaccination.

“I think they’re on the right track. You can only do so much with a social media blast,” Kelley said of previous county outreach.

“Now we’re going to go out and bring them (to get vaccinated). Man, it’s not them coming to us, it’s us going to them,” Kelley said, referring to a statement he made last week in reaching out to the hesitant faith-based communities.

More than 103,700 doses of vaccine had been administered in Imperial County according to data posted Thursday morning, April 29 on the county’s website. Some 42,146 people (21.99 percent) had been fully vaccinated and 61,601 (32.14 percent) had received at least one dose of the two-step vaccine.

Yet Public Health said the percentage of fully vaccinated people in Imperial County is more around 45 percent of those eligible to receive their doses (ages 16 and 17 for Pfizer; 18 and older for Moderna and the un-paused Johnson & Johnson vaccines). The county’s dashboard is based on percentages of the total population inoculated.

While the amount of vaccine available to Imperial County has increased dramatically and steadily for several weeks since early March, the slowdown in demand started two to three weeks ago.

An example of that was seen at last week’s mass vaccination clinic in Holtville, held by Dr. Vincent Soun. For three weeks he had been registering people for the 1,000-dose clinic, which had more than 900 registrants by the time it got underway on Friday, April 23.

Emblematic of the problem, more than a third of those who registered did not show up for their vaccinations.

And Angulo said Public Health is now seeing more residents not showing up for their second doses. While she provided no data, a recent news report out of Los Angeles County said the issue numbered in the tens of thousands there.

Something more proactive and urgent needs to take place to bring individuals to clinics. The county is still doing mobile outreach and has daily clinics at a fixed site at the Imperial County Department of Social Services’ conference room off South Fourth Street in El Centro, but Luis and Daniela Flores said a different approach is necessary, too.

Luis Flores thinks the time of “mass clinics” is likely over and the next step forward is drop-in clinics in neighborhoods of like-minded people.

“The same way that we were able to be effective at being able to reach a lot of the harder-to-reach population, it’s going to require that kind of continued collaboration between providers, community-based groups, community leaders, the county, faith-based, all of the groups that have worked to provide testing,” she said.

She cited the work early on that Salud Sin Fronteras did to directly reach Calexico residents to increase testing and to deliver personal protective equipment like face masks to farmworkers as they crossed the border.

For farmworker vaccination efforts, Salud Sin Fronteras actively recruited through phone calls, personal interactions and taking the message directly to those who needed it.

The Floreses said Salud Sin Fronteras had a direct hand in getting some 3,700 farmworkers in the county vaccinated through nearly 30 clinics in which they directly participated that were targeted or partly targeted at ag laborers.

Salud Sin Fronteras in its approach to vaccinate individuals moved past just farmworkers. While their efforts were primarily in the south county, Luis and Daniela said, it went from a laser-like focus on farmworkers, to Spanish speakers next, then their family members, and now Salud Sin Fronteras is actively reaching out to those with poor access to healthcare and health information.

It’s some of that south county concern that led Luis and Daniela to reach out to this newspaper last week after reading an article about vaccine hesitancy and the idea that it is less of a problem in Calexico because of higher percentages of overall vaccinations.

From the start, Calexico’s numbers are skewed by the active recruitment of farmworkers, Luis Flores said.

“My first reaction to seeing cross city comparisons, having been inputting the numbers, is, ‘Wait, there’s all these P.O. Boxes in Calexico that are not Calexico residents,’” he explained.

“They are migrant workers. Any migrant worker that you ask do they have an address, they will give you a P.O. Box (or an address of a friend or family member),” he said. “So, we know that there is some inflation of Calexico registration that just comes from P.O. Boxes.”

Luis added the notion that Calexico doesn’t have a problem “could be counterproductive. It suggests that we don’t have to have those same efforts here.”

He said those efforts are needed everywhere.

Daniela Flores, who is huge on data as a weapon to combat vaccine hesitancy, crunched the numbers and stated that 320 ag workers used Calexico P.O. Boxes.

“We believe this is an undercount of migrant workers, since many often use a family address in the county instead of a P.O. Box, even if they reside in Mexicali,” Daniela and Luis stated in a follow-up email on Tuesday.

The percentages Public Health shared on April 29 still had Calexico near the top of partially vaccinated communities in the county.

When asked about the county’s specific strategy to deal with vaccine hesitancy moving forward, the response was a little nonspecific.

That included the focus groups the county mentioned during the county board meeting Tuesday. Already, a focus group has met with Imperial Valley College students and others are planned, but it seems what they are gathering is information on whether the current communications strategy is effective.

“The Imperial County Public Health Department is conducting assessments in the form of focus groups with different populations in order to understand why individuals are not receiving the vaccine. Staff is also review(ing) vaccine data to look for gaps and areas where vaccine hesitancy may be more pronounced,” the department stated.

“Participants in the focus groups include adolescents and young adults and are led by public health staff. The purpose of these assessments (is) to gather attitudes, beliefs and experiences in this population related to the COVID vaccine and (that) will inform content development.”

On Tuesday afternoon, Public Health stated, “Currently staff are working on a multifaceted campaign titled ‘Together to Immunity,’ which encourages our community to get vaccinated. The campaign will primarily focus on safety, efficacy, and cost of the vaccine,” according to the email.

For their part, Salud Sin Fronteras is “still trying to figure out what the populations are” that need to be vaccinated, Luis Flores said. Anecdotally, they see ages 20 to 30 as an area of concern.

Daniela Flores said that it will be important to use “whatever resources we have to really target this next phase of the vaccine efforts and some of it is going to be data … having access to comprehensive data, and the state should be part of that.

“We’re trying to get some leadership from the people that are close to the data and close to the resources,” she said.