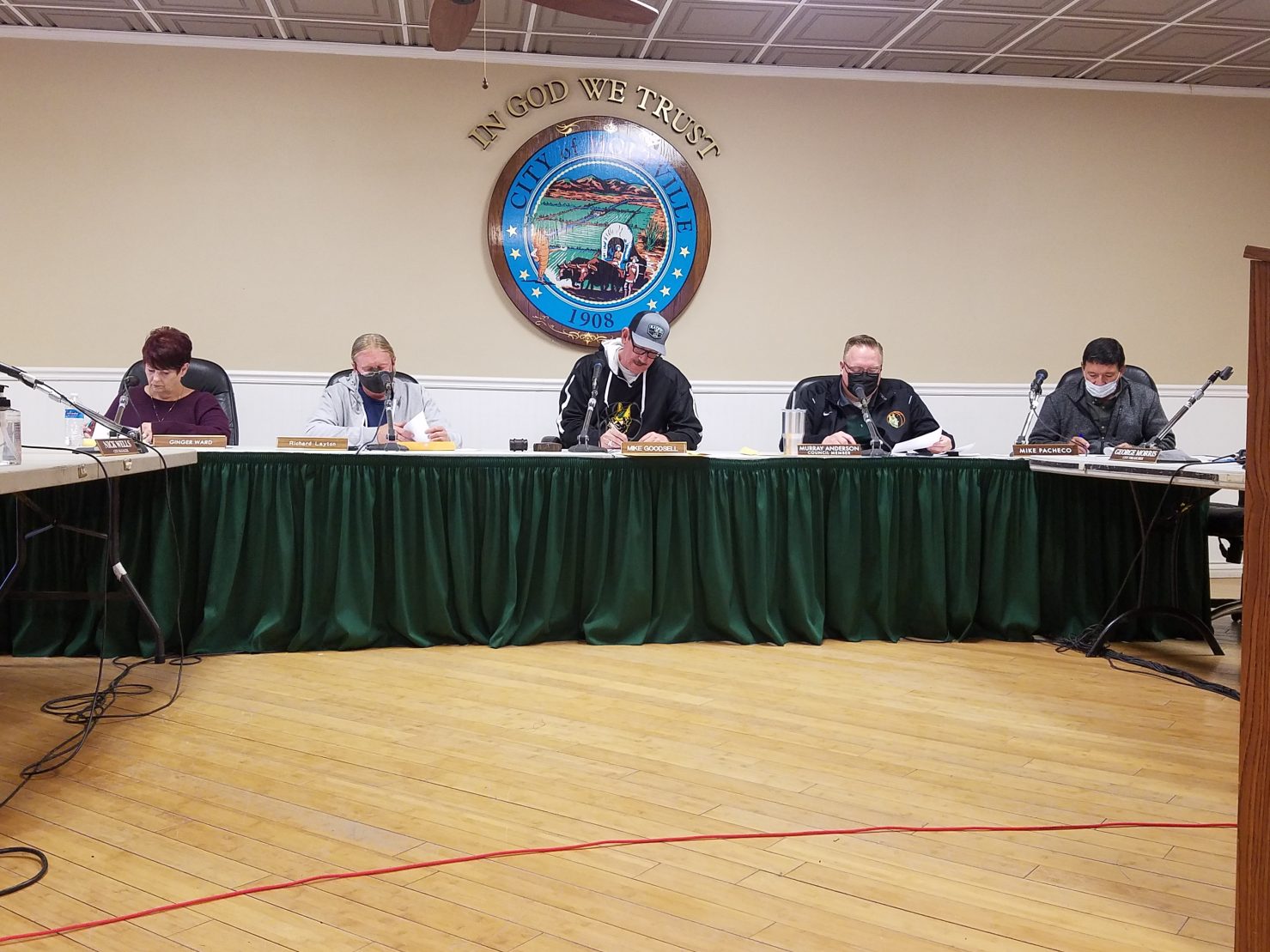 The Holtville City Council voted to have the city spend about $11,000 for new equipment for the city's wastewater treatment plant during its meeting Monday, April 26. | JULIO MORALES PHOTO
Home
Local News
In Local News

HOLTVILLE — The Holtville City Council voted unanimously to authorize the city to spend about $11,000 to purchase an aeration blower for its wastewater treatment plant during its meeting Monday, April 26.

The city’s wastewater treatment plant is furnished with three aeration blowers, which are used to maintain dissolved oxygen levels that promote the biological breakdown of solids within the facility’s basin.

Currently, one of those three blowers needs to be replaced so that the facility can continue alternating the constant use of at least two blowers at a time, City Manager Nick Wells told the council.

Though the wastewater treatment plant can function with the use of just one blower, weather and workload conditions necessitate the continual and alternating use of at least two at once, Wells said.

“One has gone out, so we don’t have the reserve right now, so we need to replace that,” he said.

The approval of the resolution by the council will allow the city to purchase an $11,388 aeration blower from Environmental Water Solutions of Gardena.

The funds for the aeration blower would normally come from the city’s wastewater enterprise fund. The account was previously allocated $5,000 to expend on equipment replacement this fiscal year but has since been spent.

Prior to the council’s vote, council member Richard Layton asked Wells whether it made more financial sense to start allocating larger amounts of funds to replace the facility’s equipment, instead of having to approve such unexpected funding requests. Wells replied the city would begin doing just that over the next couple years.

“We could keep it in there if we don’t need it,” he said, referring to the larger funding allocations.

Additionally, council member Murray Anderson questioned Wells about whether the aeration blower’s breakdown had come sooner than expected for such a machine. Wells responded that the facility’s manager indicated that they had no reason to believe so.

The council’s discussion of the planned wastewater treatment plant upgrade also prompted Anderson to inquire whether the Ramada hotel at the Barbara Worth Country Club — which reportedly is booked to capacity as part of a state-led initiative to temporarily house asylum seekers — was expected to further tax the city’s sewer plant or the resort’s sewer line that connects to the city’s treatment plant.

Wells said that he has fielded multiple calls from concerned residents of the golf resort with that same question.

The resort is equipped with its own private sewer line and lift station that connects to the city’s sewer system. Wells characterized it as being “fairly taxed” yet “sufficient” to handle the hotel’s wastewater and drainage of the surrounding residences’ pools.

During the meeting, city officials acknowledged that issues with the resort’s sewer line presented problems for the city in the past, but that the city is no longer responsible for addressing any such issues that do not involve its public infrastructure.

Currently, the county has jurisdiction over the resort’s sewer infrastructure. The county has been using a tax that is included on the resort’s residences’ property tax bills to help address problems that arise, such as a sewer line break that occurred last week, Wells told the council.

In his recent discussions with the county Public Works Department about the residents’ concerns, Wells said its director told him that the size of the resort’s sewer pipe was not so much a potential issue as was the type of line currently in place.

The line currently in use at the resort resembles an irrigation pipeline more so than sewer-grade pipe, Wells said.

“It’s not our problem at this point,” he said. “We need to keep an arms-length from it just because once we expose ourselves to liability or a problem, we’re in it.”

During the council meeting, Wells also provided the council with additional information regarding the city’s projected general fund revenues and expenditures for the current fiscal year that ends June 30.

Revenues had been expected to be reduced significantly statewide because of the COVID-19 pandemic, Wells said.

Yet, Wells’ preliminary projections suggest the city has fared better than expected, although he acknowledged that his projections remain incomplete.

Gas tax revenue to date appears to be slightly trailing the estimated $279,000 that the city had budgeted for in its FY 2020-21 gas tax account. The account also appears to be on track to close the year out with about $52,000 in net revenue, according to budget review documents Wells had provided the council.

The city’s Local Transportation Authority fund looks to end the fiscal year with about $219,000 in revenue. That projected amount would further contribute to the fund’s existing cash balance of about $1.3 million and is expected to offset the estimated $213,000 deficit in the city’s transportation fund account.

The city’s LTA funds have been used similarly in prior years to offset the transportation fund’s deficits, Wells said.

“The good news is we planned for the worst and it was not bad as we thought it was going to be,” he said.