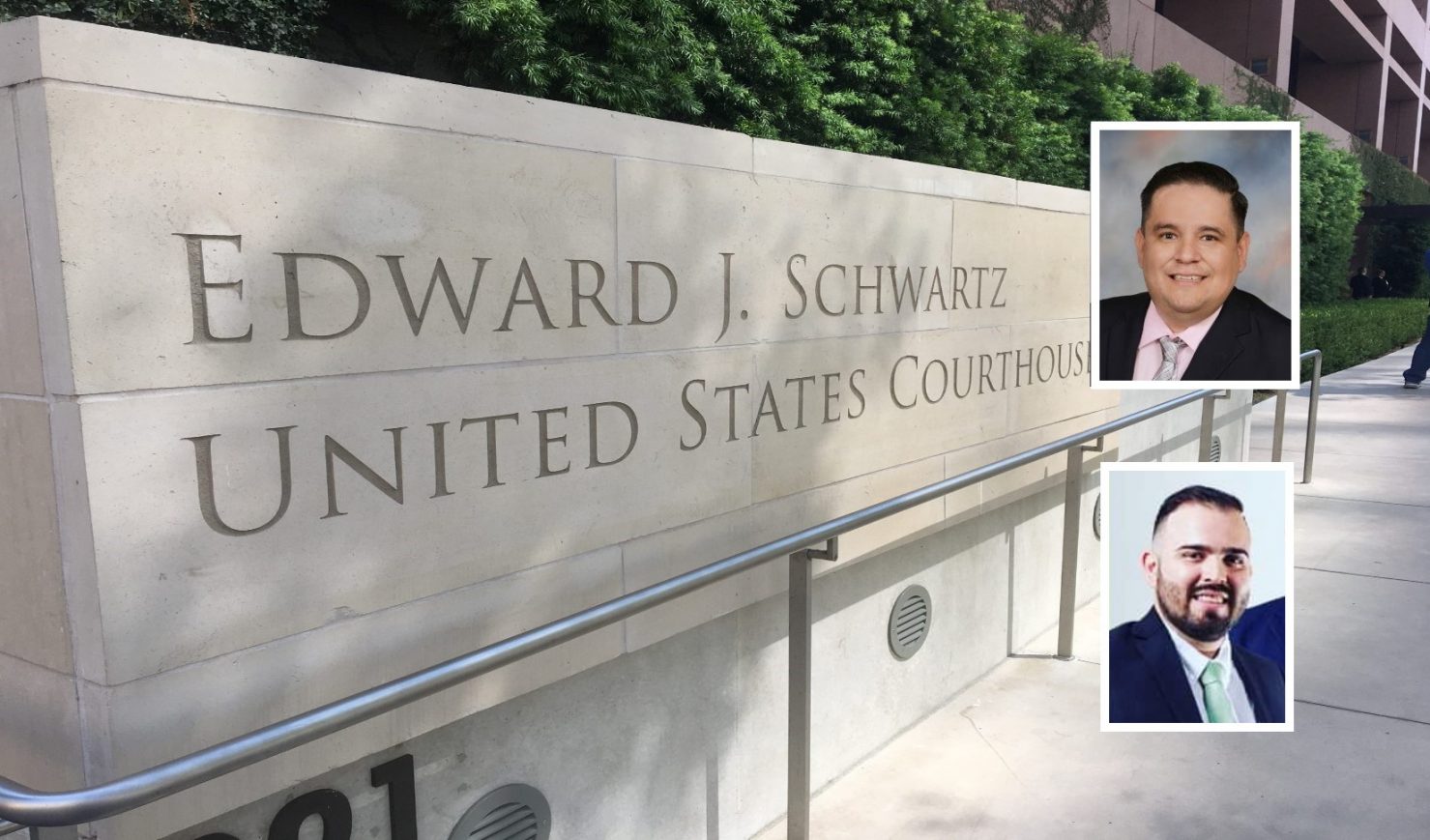 CALEXICO — The public corruption case against a former Calexico City Council member and his political crony was expected to come to an end with their sentencing on Friday, April 30 in a San Diego federal courtroom following a guilty plea last summer, but that has been delayed.

Once again, this is the third delay in sentencing the court has granted former Calexico Mayor Pro Tem David Romero and Bruno Suarez-Soto, Romero’s former appointee to the city’s Economic Development and Financial Advisory Commission.

The announcement came late in the day on Wednesday, April 28, according to Assistant U.S. Attorney Nicholas Pilchak in an email.

How much, if any, jail time Romero and Suarez-Soto will see is but hinted at in the pre-sentencing documents filed by attorneys on both sides of the case in the run-up to what was supposed to be Friday’s hearing in front of federal judge Cathy Ann Bencivengo at the U.S. District Courthouse, Southern District of California.

Pilchak stated that Romero’s sentencing has been moved to Wednesday, May 5 at 9 a.m. “Mr. Suarez’s date is still being negotiated, but it appears likely that it will settle on May 19,” Pilchak added.

All prior court proceedings had been scheduled on the same day since their indictments were handed down in May 2020. Pilchak did not immediately respond when asked why their hearings were being separated or whether they had requested the delay.

Sentencing has been delayed on two prior occasions due to COVID after the men pleaded guilty on June 11, 2020 to soliciting $35,000 in bribes from an undercover FBI agent tied to fast-tracking a fictional city permit for a retail cannabis dispensary.

Both men have been free on $10,000 bond since the plea deal was struck by the U.S. Attorney’s Office.

The crime carries up to five years in prison and a $250,000 fine at maximum punishment, but Romero’s attorney, Anthony Colombo Jr., has long said the maximum is not likely for the first-time offenders, and based on sentencing recommendations, he appears to be correct.

The U.S. Attorney’s Office is recommending each man get 30 months, or two and half years, in federal custody; three years of supervised release; the payment of a total of $17,600 in restitution (including a court fee), according to an April 23 filing by Pilchak on behalf of Acting U.S. Attorney Randy Grossman of the Southern District of California.

Yet what Romero and Suarez-Soto’s defense attorneys (even between themselves) are asking for is vastly different than what federal prosecutors want. That might be a clue to the separation in sentencing, although there is no way to tell.

Suarez-Soto’s attorney, Donald L. LeVine, is asking for “12 months and one day” of house arrest, utilizing a global-positing satellite monitor, according to an April 13 filing.

LeVine’s is a short and succinct request, as opposed to Colombo’s request for Romero, which is more expansive but appears to ask for similar leniency.

The April 20 filing for Romero is asking for “five years’ probation with the following conditions of … 12 months home confinement; agree to forfeit, via entry of a personal money judgment against Mr. Romero for $17,500.00 (jointly and severally with defendant’s co-defendant, Bruno Suarez-Soto); agree to forfeit $17,500.00 seized by the Federal Bureau of Investigation on Jan. 30, 2020; and complete 1,000 hours of community service during the first four years of probation.”

Agents recovered the Jan. 30 payment at the time of the crime, but the Jan. 9 payment has not been recovered.

It’s unclear whether an apparent last-minute April 28 filing by Colombo might have prompted the latest delay. In the filing, Colombo takes issue with unverified and uncharged claims of a fraudulent employment history for Romero that affects the sentencing formula submitted to the judge, or the point scale judges use to factor in length and specifics of sentence.

In the United States’ sentencing memorandum for Romero, on pages 9 and 10, there is a footnote that claims a “recruiter” at Romero’s insurance business claims Romero (and later, Suarez-Soto) “signed individuals up for insurance without their knowledge, promising them $2,000 if they provided their personal information and paid him $300 up front. Romero would then use the individuals’ personal information to sign them up for life insurance policies owing hundreds of dollars of monthly premiums, using each individual’s cash payment to cover the first month’s premium. The insurance firm paid Romero thousands of dollars of commissions on each of the policies, but the policies defaulted after a four-month grace period when the individuals failed to pay any premiums after the first month. According to Romero’s recruiter, Romero and Suarez-Soto owed about $100,000 of commissions to the insurance firm, which sought to claw them back after the policies were rescinded.”

Colombo’s April 28 rebuttal “none of the conduct alleged in Government’s footnote 3 was admitted or proven. There is no evidence to establish a “minimal indicia of reliability.” It is fundamentally unfair and inconsistent with the due process of law to allow double and triple hearsay from being considered by the Court in determining an appropriate sentence.”

Suarez-Soto sentencing memorandum does not include the same claims of insurance fraud.

The crime for which Romero and Suarez-Soto eventually pleaded guilty came to light at the end of May 2020, when Romero, then 36 and still seated on the Calexico City Council, and Suarez, then 28 and who had just recently resigned his role as Romero’s commissioner, were charged in federal court and initially pleaded not guilty.

As part of the agreement to then plead guilty, Romero and Suarez-Soto were required to resign from any public positions. Romero, who was mayor pro tem at the time and next in line for the mayorship, resigned from the City Council on June 8, 2020.

The pair had indicated that they had been involved in taking bribes at least once before, telling FBI agents this wasn’t their “first rodeo,” a claim they doubled-down on in their plea agreements, according to federal prosecutors.

The U.S. sentencing memos for each man lists in details the crimes for which they pleaded guilty including specificity on how the deals with the undercover FBI agent went down, when money was exchanged and dialogue remembered by the agent, which both have acknowledged as being true, signified by their plea agreement.

Romero and Suarez-Soto’s charges and eventual plea deal set off a torrent of public corruption claims in Calexico, which arguably led to a bloodletting at the polls, when three new faces and the man appointed to replace Romero, Camilo Garcia, were elected to the council in November.

The previous sentencing hearings were delayed because Romero and Suarez’s attorneys said the pair wanted to face a judge in person, rather then through COVID-restricted mean via videoconference. Those restrictions were lifted in early March.

There is not a great deal on the record about Romero’s whereabouts these days; his sentencing documents do not say where he is employed. However, there is a request for leniency based on factors such as Romero’s distinguished service in the military during Operation Iraqi Freedom and his health conditions, which his attorney claims could result in grave illness or death if he were to contract COVID.

Court filings on behalf of Suarez-Soto by LeVine show he is employed as an H2A visa assistant for an agriculture labor firm and has successfully completed a substance-abuse diversion program.

To read additional reporting on the case and the lengths to the city went to fill Romero’s seat, click here.

Next
Being ‘Hyper Local’ Key to Vaccine Hesitancy Efforts