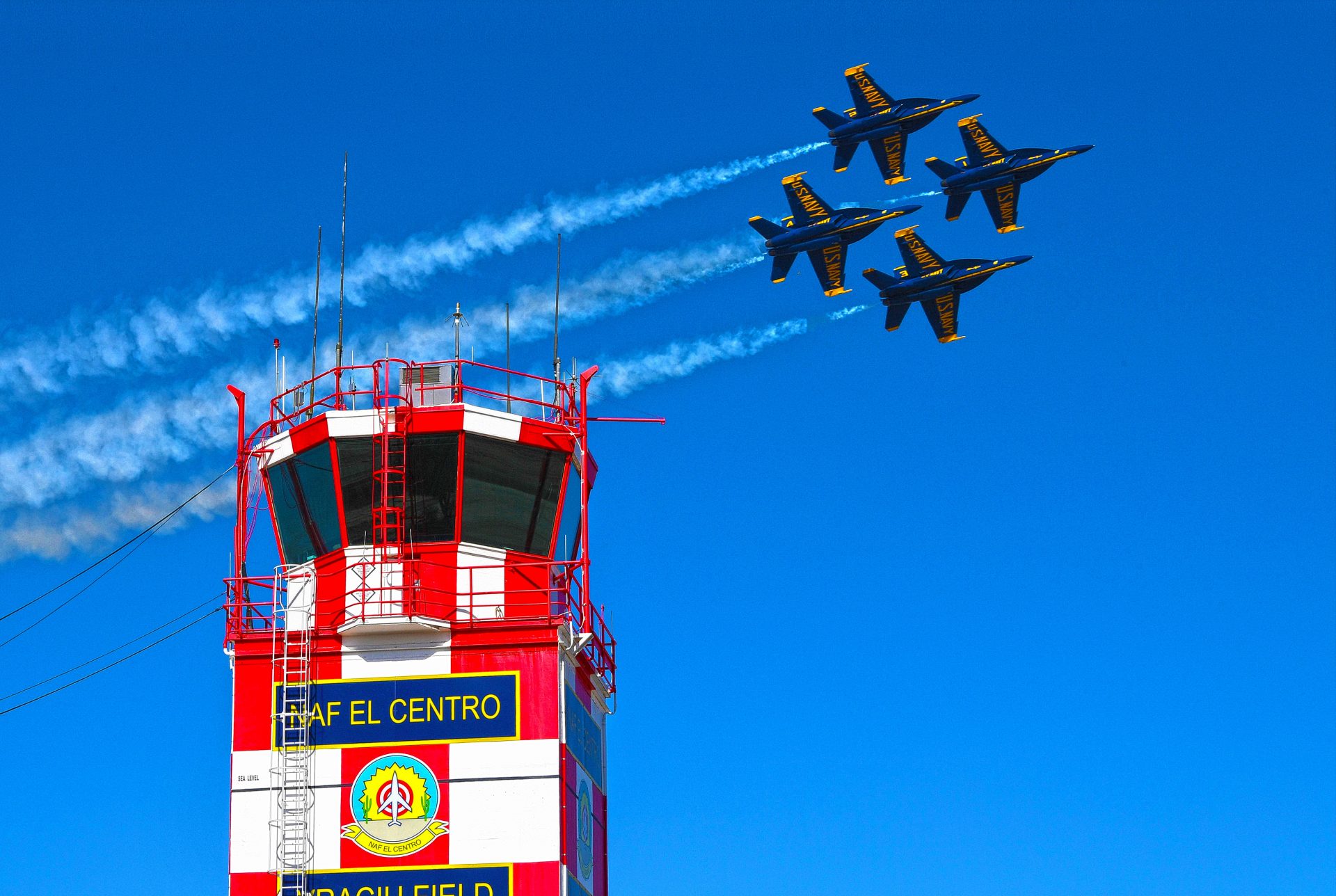 The Blue Angels pass over a control tower at Naval Air Facility El Centro during a training run. The base is celebrating its 75th anniversary this year and kicked off that celebration with an event at the flagpole on the base on Friday, April 30. | NAVAL AIR FACILITY/MC3 DREW VERBIS PHOTO
In Regional News

‘Pearl of the Desert’ Key to Nation’s Defense Since 1941

NAFEC celebrates its 75th year as it highlights it ties to the Valley, historical significance

SEELEY — Naval Air Facility El Centro is in the midst of celebrating its 75th anniversary, and with it the key role the facility has served for the United States Navy and the strong ties it has established in the community.

To commemorate the milestone event, “The Pearl of the Desert,” as the base is also affectionately known, hosted a small anniversary celebration that highlighted its history and significance.

That local history dates to 1942, when the U.S. Department of Defense acquired the former Imperial County airport to use as a U.S. Marine Corps air station. It wasn’t until May 1, 1946, that it was commissioned as a naval air station.

The air station was one of five that the Navy established on the West Coast following the attack on Pearl Harbor in 1941, and which were situated farther inland from the coast to protect against an assault by the Japanese from the sea, said NAFEC Commanding Officer Capt. William A. Perkins.

That the base has since come to play a significant role in the Navy’s combat training and warfighter readiness is partly owed to the more than 350 days of “absolutely perfect flying weather” that the Valley experiences.

Its role in “shaping history” is also largely owed to the celebrated Navy personnel whose presence through the years had contributed to the successful training and testing programs aboard NAFEC, Perkins said.

“This base has and continues to serve an irreplaceable part of the aircraft carrier pilot production team as well as providing access to training ranges used by every aircraft carrier squadron based on the West Coast and even some on the East Coast,” he said during the anniversary celebration.

Over the years, the facility had been formally known as Naval Auxiliary Landing Field and the National Parachute Test Range.

At its inception, the air base was comprised of two small runways, skeet and rifle ranges, turret ranges for gunnery practice, and training grounds for ground rockets.

In 1959, the first high-speed ejection seat was tested in El Centro, which prompted new requirements for parachutes capable of withstanding those forces, he said.

Back then, Navy personnel did not have computer models, simulations, nor drones or dummies at their disposal. Instead, it relied on mathematics, solid workmanship and test plans that included live demonstrations, Perkins said.

Indeed, parachute testing became such a key component at NAFEC that a flight demonstration team was created in 1961 and which had continued to fly missions for nearly a decade.

“The Chuting Stars were formed here, and they were the first parachute demonstration team in the U.S. Navy,” Perkins said.

The transition from propellor aircraft to more powerful jet fighters in the 1960s prompted longer runways, expanded flight operation areas, and added testing of equipment and technology at NAFEC.

Some highlights from that era include parachute testing for the Mercury, Gemini and Apollo capsules and the Space Shuttle program. Remnants of parachutes from that bygone time were even repurposed as shade structures for a community park in Seeley, he said.

The relationships that the Navy established during the 1960s and 1970s between NAFEC, the National Aeronautics and Space Administration (NASA) and the national space program continue to this day. For example, the SpaceX Dragon capsule parachute was tested out on the NAFEC range prior to last spring’s historic return to manned spaceflights, Perkins said.

Surrounded by optimal weather conditions more than 350 days a year, NAFEC has been able to amass an estimated 37,000 flight operations and about 11,000 sorties, or defensive deployments.

“The claim to fame for the base is that nearly every single aircraft carrier-based pilot has flown missions from El Centro at some point in their career,” Perkins said.

Historic figures who have had ties to the facility through the years include former Marine Corps aviator and astronaut Sen. John Glenn Jr., who flew training missions locally in 1945. U.S. Army Air Corps Reserve officer Charles Lindberg, whose historic transatlantic flight aboard the Spirit of St. Louis earned him wide renown, had served as a flight instructor for the F-4U Corsair in late 1940s at NAFEC, as well, Perkins said.

During the facility’s diamond anniversary celebration, the spotlight was also turned on two longtime members of the base community.

Bacilio Zavala was recognized for his 30-plus years with the base, both in and out of uniform. A former A-7 Corsair II plane captain, Zavala operates NAFEC’s transient line support team. Similarly, Katrina Portwood, direct of child youth programs at NAFEC, was singled out as the base’s longest-serving civilian. Both helped cut a birthday cake that was presented during the anniversary event.

The event’s guest speaker was Bill Gay, a retired Navy and Naval Reserve officer who joined the Navy as an ensign in 1968 after graduating from the University of Missouri Naval Reserve Officers Training Corps.

His remarks highlighted the strong tie that NAFEC has enjoyed with the Valley community and which Gay acknowledged would be too extensive to include within a short speech.

“Suffice to say, it has been a strong one,” Gay said.

A tangible sign of NAFEC’s close ties to the community is on display in front of Wymore Inc., a welding and machine shop located at 697 S. Dogwood Road in El Centro. There, the public can observe a piece of machinery that resembles a large plumb bob, and whose markings include the words “Apollo parachute tester” and decals of the American flag and the NASA logo.

Gay, a public relations professional, author, and journalist, explained how in 1967 a fatal fire at Cape Canaveral Air Force Station damaged the Apollo 1 command module and forced NASA to make modifications to its escape system.

As part of that effort and through a contract with Northrup Venture Corp., Wymore created a boilerplate capsule that matched the weight of the new and heavier Apollo command module and which was used to replicate reentry forces on the command module parachutes, Gay said.

Though the parachute system failed on the first test vehicle, modifications were made that proved successful on subsequent tests and which were determined would help safely return the astronauts to Earth after reentry, Gay said.

Wymore Inc. was founded by the late Dick Wymore, who was a proud World War II Navy veteran and who was an active supporter of NAFEC and an annual Kiwanis barbecue held in honor of the Blue Angels, of which he was an honorary member, Gay said.

Wymore Inc. was also instrumental in the development of parachute mechanisms used in escape systems for helicopters, the B-1 Bomber, and the parachute test vehicle mechanisms for cruise missiles that were recovered for reuse after test flights.

“The story of Wymore is the story of just one of many local businesses that have been a partner with this base,” Gay said.

As part of the NAFEC’s ongoing 75th anniversary, the facility has plans to post a series of videos and pictures featuring distinguished Navy personnel and individuals on its Facebook page commemorating the momentous event.

Further plans call for an expanded version of the base’s history to be published on its website, said Kristopher Haugh, NAFEC public affairs officer.

“We’re going to try to do something throughout the rest of the year to celebrate the ongoing anniversary,” Haugh said.