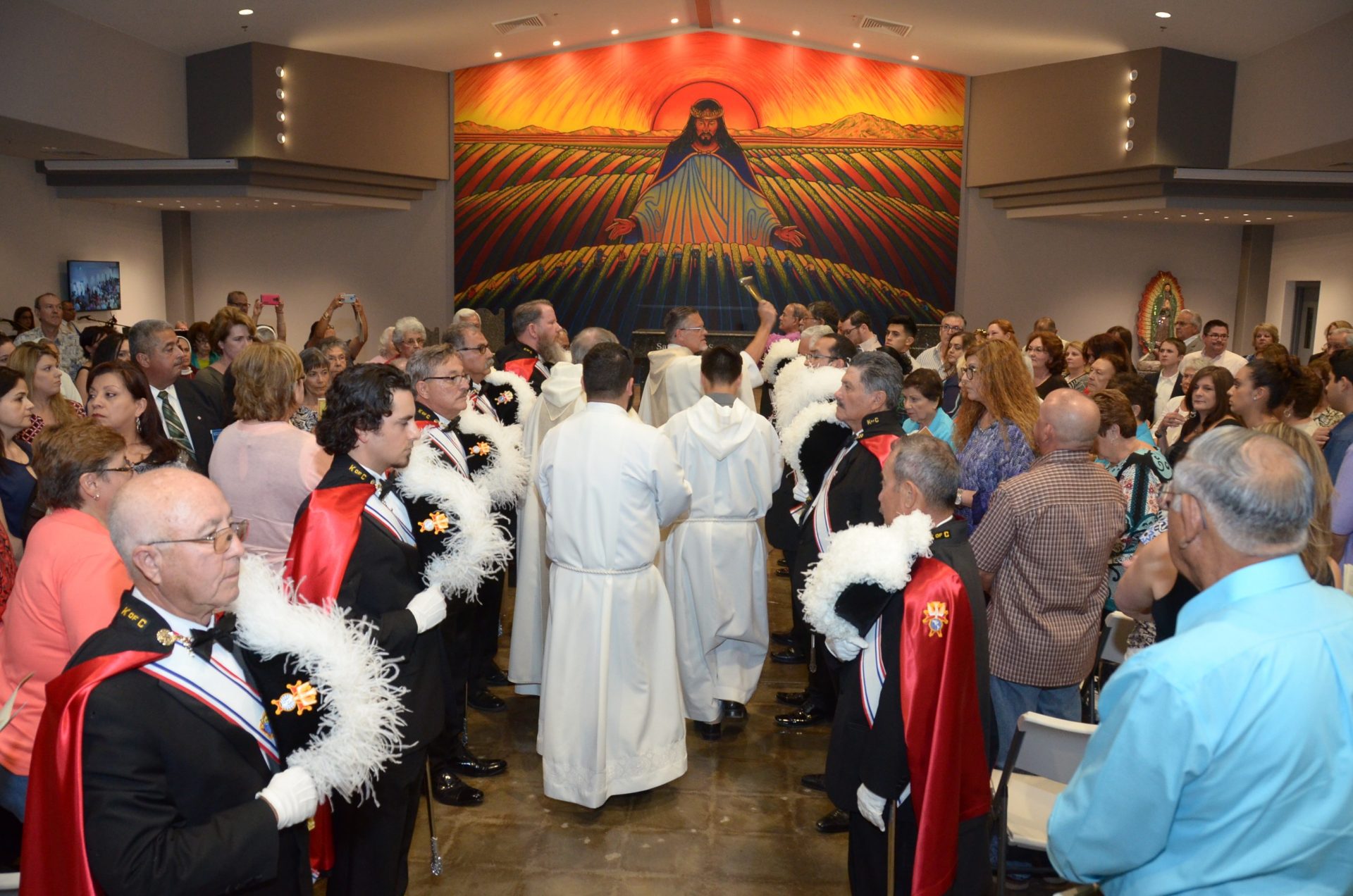 Father Mark Edney (center, arm raised in blessing) performs the dedication Mass for Our Lady of Guadalupe Catholic Parish’s Capilla de Cristo Rey, or Chapel of Christ the King in English, in El Centro on April 11, 2016. Behind the altar is the mass reproduction of an original painting by Holtville native Simón Silva commissioned by the church. The painting is titled “Cristo Rey de los Campo,” or “Christ King of the Field.” | COURTESY PHOTO
Home
Featured Stories
Share

As if Simón Silva’s entire breadth of human experience was laid bare on the canvas, the pieces he painted for an El Centro Catholic chapel tell his story from the fields to famous artist.

First, in a 2015 commissioned piece titled “Cristo Rey de los Campos,” or “Christ King of the Fields,” and later, in the 14 Stations of the Cross in individual portraits around a similar theme, Silva shared visually his journey from migrant farmworker, to artisan, to well-regarded educator.

“His story is highly compelling … of someone who has benefitted from richness of that whole experience but also the hurt and pain that came with it,” explained Father Mark Edney of Silva’s upbringing in Holtville as a migrant farmworker, traveling the state with his parents and many siblings.

“Particularly with ‘Cristo Rey de los Campos,’ it beautifully represents the dignity of that labor,” said Edney, who is in his ninth year with El Centro Catholic and is dean of the Imperial Valley Catholic Diocese, which ministers to a combined 4,000 parishioners between Our Lady of Guadalupe parish on the East Side and St. Mary’s Catholic on the west.

Edney reflected on Silva’s contributions to the spiritual life of his parishioners on Tuesday, May 4 in the afterglow of the news that Silva, who now lives in Los Angeles but has family still in Holtville, was honored with a 2021 Latino Spirit Award for “Achievement in the Arts” by the California Latino Legislative Caucus on Monday, May 3.

Silva could not be reached for comment by publication.

In announcing the designation, Assembly member Eduardo Garcia, D-Coachella, stated he was proud to congratulate Imperial Valley’s native son for receiving the award.

“I am incredibly proud to recognize the achievements of Simón Silva, whose artwork is deeply rooted by his experience growing up in Imperial Valley. Simón Silva has used his mastery of visual arts to celebrate our vibrant immigrant culture and educate others with vivid stories of farmworker families,” Garcia said.

Born in Mexicali in 1961, Silva emigrated to the Imperial Valley with his parents and siblings, settling outside Holtville. He rose to prominence as one of the foremost Latino artists with his vivid depictions of Mexican and Mexican-American life, particularly that of farmworkers, their families, and their champions.

Silva’s iconic works, many reminiscent of the bold strokes and use of color of famed Mexican painter Diego Rivera, have served as the focal point to many public spaces dear to Imperial Valley residents’ hearts, especially as the key image of Our Lady of Guadalupe parish’s Capilla de Cristo Rey, or Christ King Chapel in English, which has become the center of religious life for the 2,200-strong parish, Father Edney said.

With a main sanctuary that only holds 300 people, Our Lady was accustomed to holding Mass and other services in the parish hall in the parking lot of the East Orange Avenue campus. Yet in 2014, ground was broken on converting the hall into a full chapel that is rated for a capacity of 750, although Edney said it is capable of holding more.

As part of that conversion and to honor the mostly Latino and largely Spanish-speaking flock, a painting was commissioned that would ultimately be used as the backdrop to the altar on which Mass is said.

Edney said the painting was delivered by Silva first, then Edney had a company in San Diego professionally reproduce it to fit onto the wall of the chapel, which he said is around 18 feet high.

About a year later, Edney explained, Silva again used his copious talents to produce a farmworker-themed Stations of the Cross, the 14-paneled series of pictures or carvings representing the successive incidents during Jesus Christ’s progress from his condemnation by Pilate to his crucifixion and burial.

The images have proven popular as they continue to be a fundraising tool for the church, where people can purchase high-quality prints or framed prints of each or all of the Stations plus “Cristo Rey de los Campos.”

Edney called Silva’s art an outcropping of an “authentic human experience,” referring to the hard labor of toiling in the fields beside his family.

The priest said he shared photos of “Cristo Rey de los Campos” with a friend from San Diego, who began to cry, telling him, “that’s my mama,” informing Edney that her mother was also a migrant farmworker.

Artistically, Edney said he shares in Silva’s aesthetic, having a fondness for the warm hues the painter frequently revisits: oranges, yellows, and reds.

Although it’s debatable whether Silva paints with the frequency he once did at his prime, art is still his central focus as he has dabbled in writing, teaching and now travels the country lecturing on how to “Cultivate a Creative Mind,” his series of workshops and keynotes that inspire others to “overcome their obstacles, embrace their individuality, which (Silva discovered firsthand) is their greatest asset, and regain their creative confidence,” according to Assembly member Garcia’s announcement of Silva’s award.

His selection for a Latino Spirit Award is very much rooted in that multi-media approach to art. Edney calls Silva a “Renaissance man,” who “comes from a very humble background; he’s a huge success as a human person and also as an artist.”

Graduating from Imperial Valley College with an associate’s degree in art, he went on to earn a Bachelor in Fine Arts in illustration from ArtCenter College of Design in Pasadena.

In 1992, Silva’s work was chosen to represent the United States in the Latino/Hispanic Heritage Month Art Exhibit at Los Angeles City Hall. In 1993, he had a one-man exhibit at University of California, Los Angeles, as part of the “Raza Art Series” and that same year was commissioned to do a portrait for the cover of Time magazine.

The Latino Spirit Awards were established in 2002 at the Capitol in Sacramento to coincide with California’s acknowledgment of Cinco de Mayo and to highlight positive role models in Latino community. Every year, the California Latino Legislative Caucus honors Latinos and Latinas in various categories that range from athletics to public service and human rights.

“Every year, the Latino Spirit Awards allows us to spotlight the achievements of Latinos in various industries who have emerged as changemakers or role models in California.” Assembly member Garcia stated in his press release. “I have been hoping to have my Latino Caucus colleagues award Simón Silva for some time, and I am grateful for this opportunity to honor one of our own Imperial Valley heroes.”