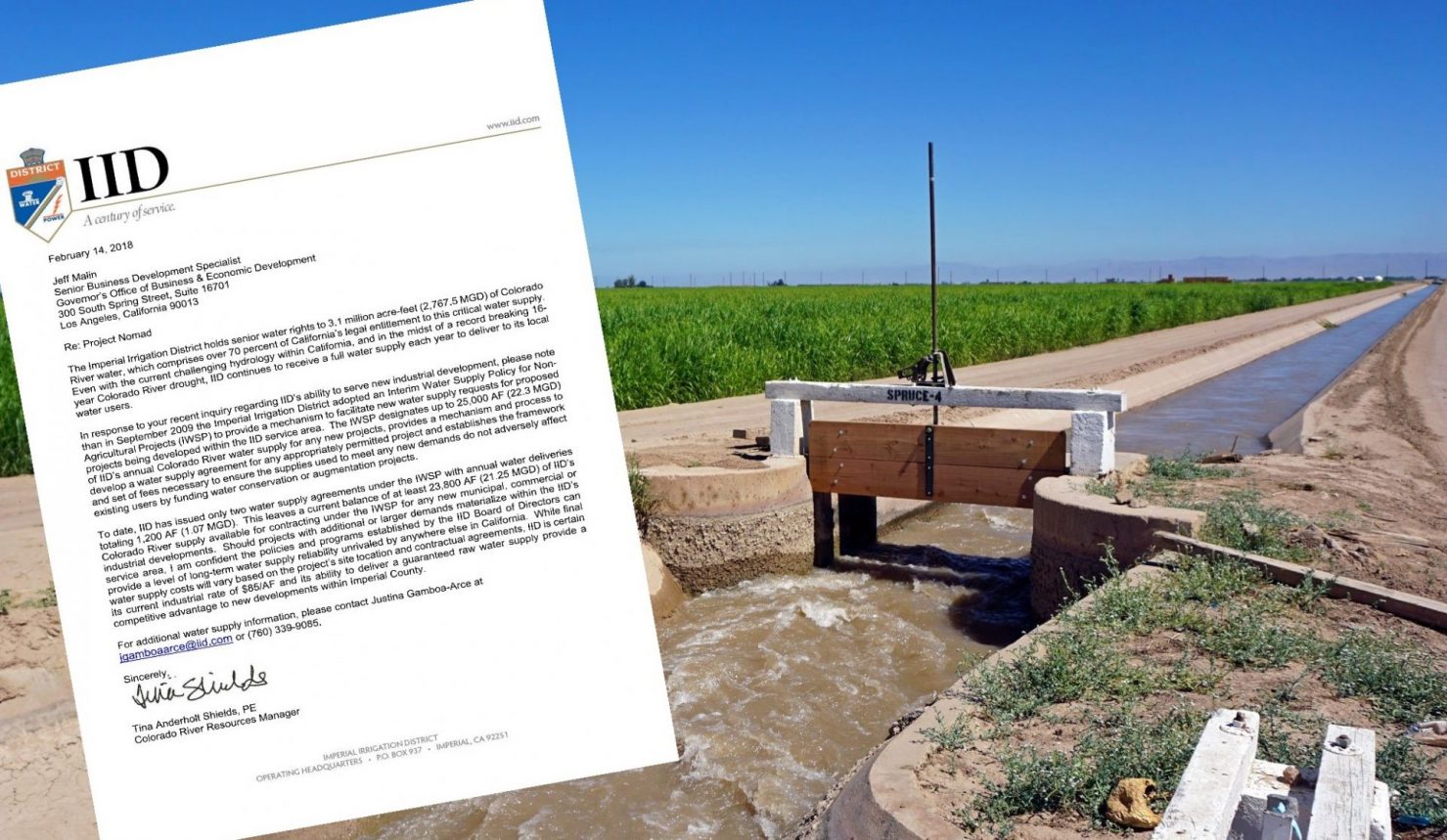 A copy of a letter from February 2018 is shown that Imperial Irrigation District officials say used a forged signature of the district’s water manager and district letterhead by an Imperial Valley Economic Development Corp. official. The letter has prompted the district to halt funding to IVEDC amid an investigation into the matter. | CALEXICO CHRONICLE/HOLTVILLE TRIBUNE GRAPHIC
Home
Business
In BusinessRegional News

(This story was updated at 7:45 p.m. Tuesday, May 18 with additional information from the Imperial Irrigation District board meeting.)

A top Imperial Valley Economic Development Corp. official has been accused of fabricating a letter from the Imperial Irrigation District and forging an electronic signature of the district’s water manager, Tina Shields.

An investigation into the matter has been initiated, IID has sent a strongly worded letter to the IVEDC on Tuesday, May 11, and the district recently suspended payment on $100,000 in funding to the economic development agency pending resolution of the matter.

However, it wasn’t clear where the matter stands as of this week, following the Tuesday, May 18 meeting of the IID Board of Directors, where no mention of the issue was made by district staff or policymakers.

An IVEDC board member addressed the issue just before the IID board met in closed session on Tuesday morning, and one member of the public spoke against the IVEDC during public comments in the afternoon. But that was it.

The IID is accusing IVEDC’s Sean Wilcock of forging Shields’ signature on a letter to a specialist in the governor’s office seeking information about the district’s water rights and the availability of water for a potential industrial project in Imperial County.

Wilcock is vice president of business development and services for IVEDC. He’s been with the agency for at least 10 years, according to his Linkedin profile.

The document, dated Feb. 14, 2018, was written on IID letterhead and has the signature of Shields.

It’s a “profoundly disturbing matter … involving inappropriate conduct by Mr. Wilcock,” stated IID’s General Manager Henry Martinez in a letter sent to IVEDC President and Chief Executive Officer Tim Kelley on Tuesday, May 11, that was obtained by the Calexico Chronicle.

“The problem arose when Mr. Wilcock forwarded a letter he indicated was previously provided by Ms. Shields on behalf of IID, suggesting that an update of this letter would meet his needs,” Martinez stated.

Kelley told the Calexico Chronicle on Wednesday, May 12 that the letter in question was never mailed.

Still, Martinez’s letter goes on to say that Shields reviewed the letter and concluded that she had not written it. She could not recall “Project Nomad,” which the letter referenced, had no record of the letter in her archives, and it was a Word document rather the .pdf files she usually uses. She also concluded that her signature had been “copied, cut and pasted” into the document.

Shields and Wilcock had a heated discussion over the phone concerning the matter, according to Martinez’s letter. It continues:

“When confronted with these inconsistencies, Mr. Wilcock admitted he had recycled prior draft letters written by Ms. Shields for other specific projects, edited them for a different project and then copied, cut and pasted Ms. Shields’ signature from another document — all without her permission or consent! Not surprisingly, Ms. Shields was outraged over this blatant forgery and immediately terminated the conversation after advising Mr. Wilcock that she would be reporting this breach of trust to her management immediately.”

The IID has requested the IVEDC to review and verify the authenticity of all communication the economic development agency sourced from the district, and forward that material to the IID by Friday, May 14. It wasn’t immediately available by deadline May 18 what information had been turned over.

“If the situation is correct, they’re not only using IID letterhead, but an employee is providing what could be considered commitments on water rights. It compromises the district and misrepresents the district to any developer in the Valley,” Martinez told the Chronicle in a phone interview on Wednesday, May 12.

Further, the district has suspended the payment of $75,000 in membership dues to the IVEDC as well as $25,000 of financial support for the IVEDC’s annual renewable energy summit pending the outcome of an investigation.

IID’s Board of Directors was expected to discuss the matter in a closed session on May 18, during the regular meeting, but it was not clear if that had occurred. No action was reported out of closed session on Tuesday afternoon and the agenda stated no specific item related to this issue, only “potential litigation.”

IVEDC board Chairperson Douglas Dahm addressed the matter before the board went into closed session around 8:30 a.m. May 18.

“IVEDC has worked tirelessly over the years to bring business and jobs to Imperial Valley. We estimate that we’ve attracted over $10 billion in projects and created and retained thousands of jobs for Imperial County residents. We have worked tirelessly to make this happen,” Dahm said. “When the news of a possible violation of public trust related to forgery happened, we wanted to respond to this and cooperate in any way possible in order to take care of this issue. We take these issues extremely serious, and we are here to establish the integrity, honesty, and transparency that we use in running our business and we want to make sure IID understands that those are central to us in our business as well.

“While our preliminary reviews show there was no wrongdoing, the public trust in our business is critical, and that is why we are going above and beyond to ensure we are transparent and can keep the public trust. We have hired an outside CPA to review all documents issued, an outside private investigator, outside counsel, and a technical firm to assure that we comply with all rules and regulations, but above the rules and regulations we’re focused on keeping the public trust, which is paramount. We work daily with government agencies. The trust of those agencies is paramount,” Dahm said.

When the district went into open session after 1 p.m. Tuesday, the lone mention during public comments came from El Centro resident Peter Rodriguez.

“I, as a ratepayer, am in full support of an investigation and not a suspension, but a termination of the $100,000 and ask the whole board to stand behind that, because if you don’t, then you are part of the problem,” Rodriguez said. “This is hurting business, this is hurting people who want to trust and work with the IID. Anyone involved in this should resign.”

During an interview with the Calexico Chronicle on May 12, IID Division 2 Director JB Hamby asked:

“It’s a serious and disturbing situation and begs the question, how many other documents have been forged?”

In a follow-up discussion later in the day, Hamby was asked whether there could be any potential litigation involved, which is one of the Brown Act’s stipulations for discussing an issue in closed session.

He said all “options should be evaluated due to the severity of the issues at hand.”

Division 3 Director and board President Jim Hanks said he was upset but was withholding judgement for the time being.

“I want verification of what transpired before I do anything,” he said. “Whether this will be held as a personnel matter within IVEDC, or whether it will be much bigger remains to be seen. If it’s not resolved, I imagine the board will take some action.”

IVEDC’s Kelley said the agency was not misrepresenting the IID. IVEDC was investigating the matter and had not found any evidence that Wilcock or other IVEDC employees had fabricated other IID documents.

“This letter that is in this document did not go out. This letter was sent from Sean Wilcock to IID as a sample for them to review and update,” Kelley said. “The mistake Sean made was not putting draft across it.”