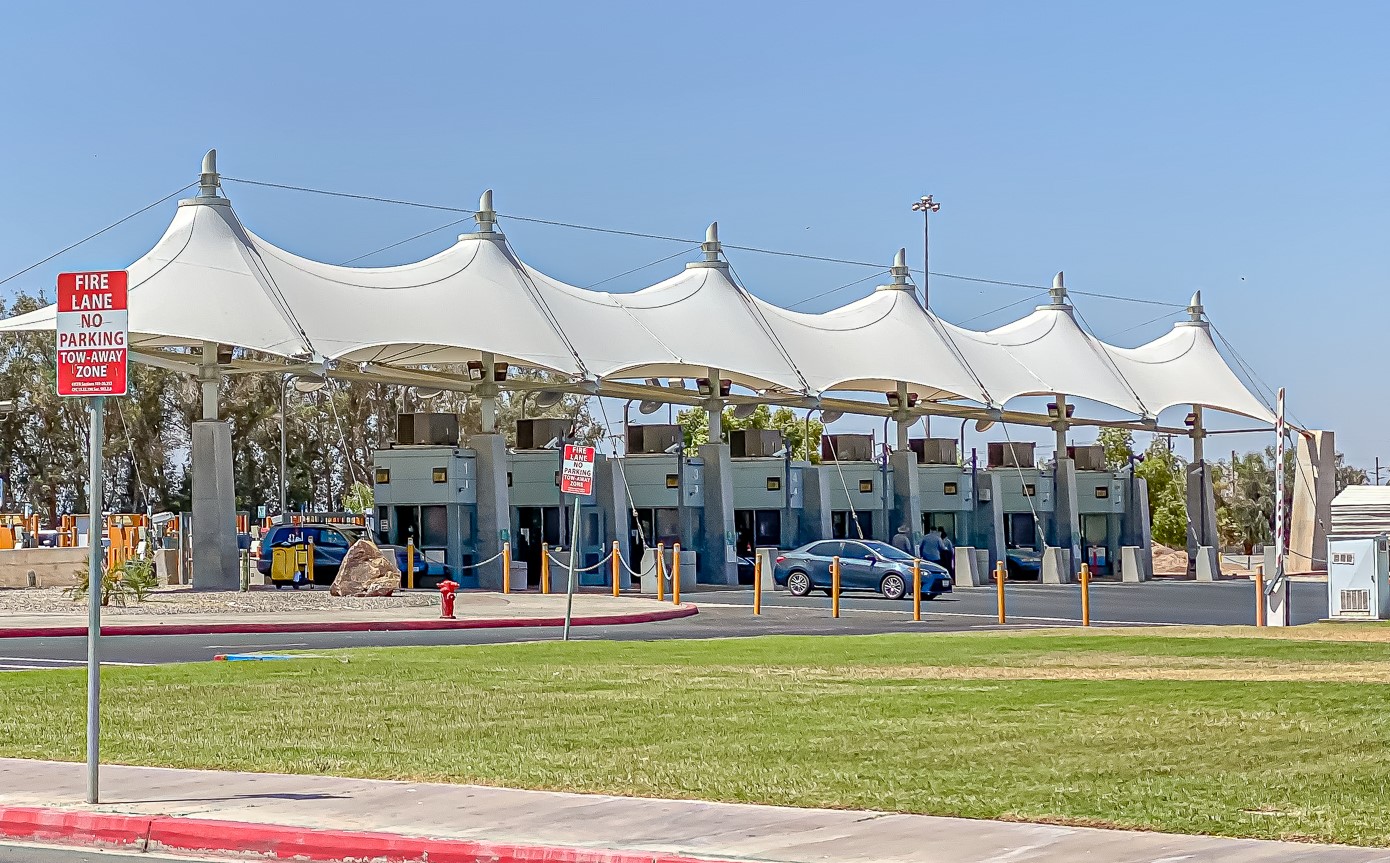 Vehicles head north from Mexico through an inspection point at the Calexico East Port of Entry on May 12. The Department of Homeland Security late Tuesday night, July 20, announced it would extend “nonessential” travel restrictions between the United States and Mexico, as well as Canada, to at least Aug. 21. | CAMILO GARCIA JR. PHOTO
Home
Regional News
In Regional News

Mexicali-derived shopping and destination tourism has generated as much as $380 million a year for Imperial County in pre-COVID conditions, and those are severely outdated numbers.

The Imperial County Board of Supervisors on Tuesday, May 11, voted to ratify a letter the county had already sent out May 6 to the federal government expressing concern about long border wait times due to reduced hours of operation at the Calexico East port.

The east port of entry’s passenger lanes have reduced hours due to COVID-19 concerns, U.S. Customs and Border Protection announced at the start of the regional shutdowns tied to the pandemic. Yet those changes have not been adjusted with the improvement of conditions.

The letter was addressed specifically to Anne Maricich, acting director of field operations for the San Diego office of U.S. Customs and Border Protection.

“Since April 26, 2020, the hours of operation for the Calexico East Land Port of Entry were changed to operate from 6 a.m. to 2 p.m.,” according to the letter from the Board of Supervisors. “Although the change in the hours of operation only applied to the passenger portion and not the cargo/commercial facility of the LPOE, there are still significant traffic impacts leading to delays at the Calexico West LPOE.”

In short, the reduced hours east of Calexico is jamming up traffic at the crossing within city limits, which District 1 Supervisor and board Vice Chair Jesus Escobar said is impacting Calexico specifically and the entire region. Some of the wait times have reached up to four hours to cross, according to the letter.

A majority of the revenue stream for Calexico comes from Mexicali residents coming to Imperial County to shop, eat, and seek services, Escobar indicated. So, any changes to the border times are always going to hit Calexico hard.

In 2014 Imperial County saw 18.6 million people traveling into Imperial County from Mexicali through the Calexico area ports of entry, according to a 2017 Imperial Valley Border Economic Impact Study, the last known significant study done on the regional economy.

Escobar said that while there has been some assistance to Imperial residents and business owners with three stimulus checks and increased unemployment benefits, those are Band-Aids on the situation.

“That’s artificial, and that’s going to stop,” Escobar said on Wednesday morning, May 12. “That’s why it’s so important that we open the border safely.”

There are a multitude of problems caused by decreased hours at the Calexico East port, he said. And while he understands the health and safety concerns attributed to COVID, with the numbers continuing to track down and the amount of vaccine supply continuing to be available, it’s time to push the envelope to get the port hours expanded.

“Aside from residents who travel back and forth between the (land port of entries) for professional, medical, or personal purposes, a large percentage of workers employed by agricultural companies located in Imperial County live in Mexicali and cross the border every day,” according to the letter. “As we are approaching the summer months and temperatures begin to rise in Imperial County, farmers and ranchers often implement night and early-morning production schedules limiting worker activity and to protect their employees when temperatures reach 95 degrees and above.

“As these new, temporary hours have been implemented for more than a year now and COVID-19 related restrictions are slightly loosening nationally as more in our communities get vaccines, are there plans to adjust this?” the letter continues. “Any changes or modifications made at the (land port of entries) directly impacts our local economy, and potentially our air quality with the idling vehicles, and it is imperative that the County of Imperial is informed of any plans to modify operations at any of the three local (land port of entries).”

Intergovernmental Relations Director Rebecca Terrazas-Baxter told the board on Tuesday that the office of the U.S. Customs and Border Protection Acting Director of Field Operations has confirmed that the letter was received, and a formal written response is pending.