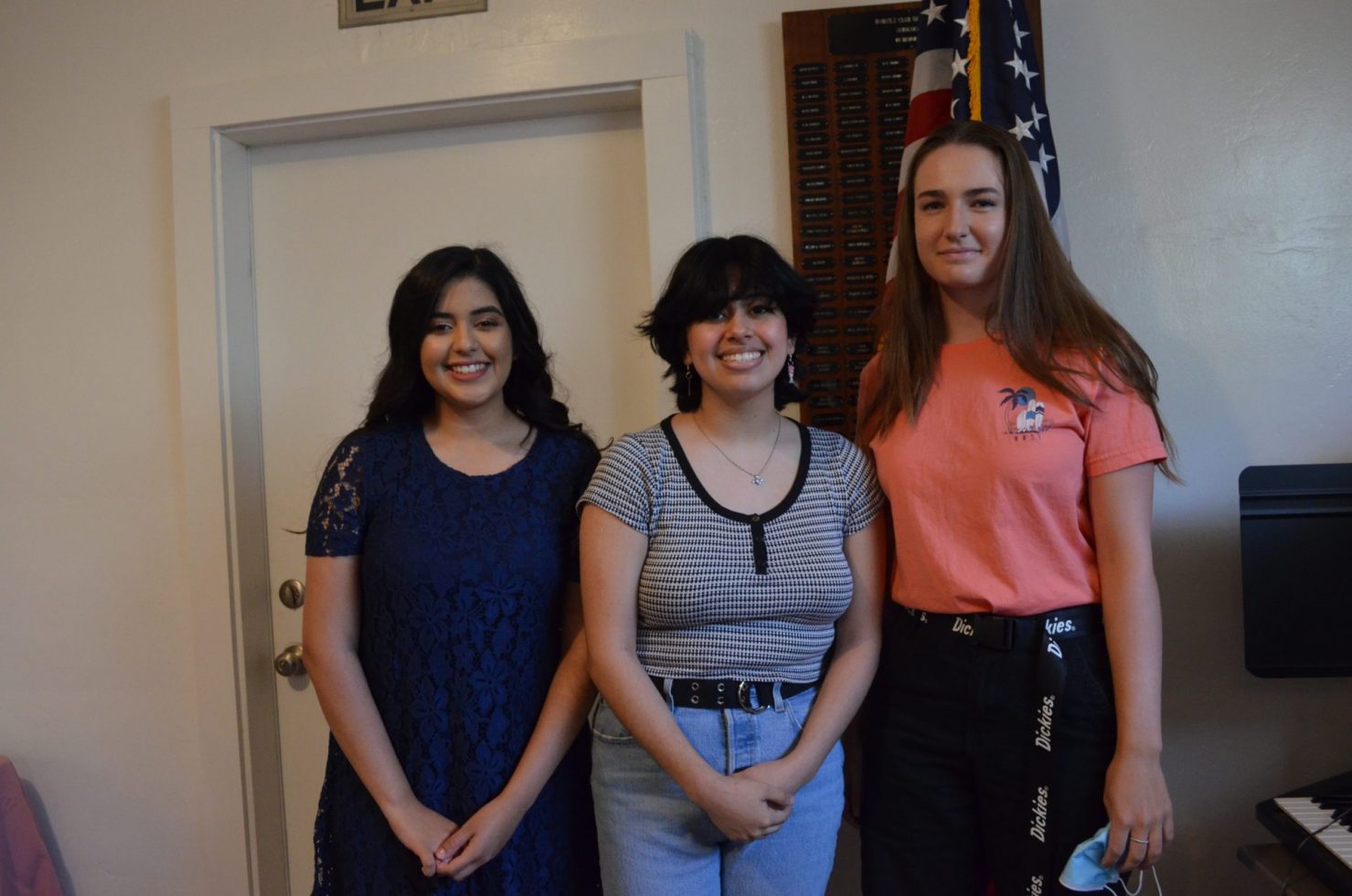 The Woman’s Club of Holtville honored the recipients of its annual scholarship awards, Melissa Cortez (from left), Inez Rosales and Rachel Chambers (recipient Diana Garzon was not in attendance) with a luncheon at its clubhouse on Wednesday, May 5. | JULIO MORALES PHOTO
Home
Community Briefs
In Community Briefs

Woman’s Club Meets for First Time in Over a Year

HOLTVILLE — The Woman’s Club of Holtville honored the recipients of its annual scholarship awards with a luncheon at its clubhouse on Wednesday, May 5.

The annual scholarship luncheon also served as a fundraiser for club’s scholarship program and attracted about 25 individuals for a homemade meal of chicken, rice, vegetables, salad, and carrot cake for dessert.

Both Garzon and Cortez are nursing students at Imperial Valley College, while both Rosales and Chambers are high school seniors. Garzon was unable to attend the luncheon.

The luncheon on May 5 was the first formal meeting in more than a year that the Woman’s Club of Holtville had hosted. During the meeting, club president Deborah Thornburg lit nine candles in honor of the club members and individuals in general who had passed away over the past year.

More on the Scholarship Recipients

Rosales lives in El Centro and has already been accepted to University of California, Irvine. She hopes to earn a master’s degree in engineering.

Her interests in school have been science, technology, engineering and math courses, and she said she would one day like to set an example for girls by working in the male-dominated STEM field.

Rosales lives with her aunt; both her parents have passed away.

Chambers is a senior at Holtville High School, who received a partial golf scholarship to Vanguard University, where she plans to major in biology.

Her interests included FFA and golf, and she hopes to one day be a veterinarian.

Chambers’ mother is a substitute teacher and her father works for Keithly Williams Seeds.

Cortez, who is now at IVC, graduated from Calexico High School. Her strengths are science and math, and she’s studying to be a nurse practitioner.

She has worked translating English to Spanish for other students as well as patients.

Garzon had previously studied at Universidad Autonoma de Baja California. She wanted to be a doctor at one point.

She earned an associate’s degree with honors before entering the nursing program at IVC. She eventually wants to earn a master’s degree.

Garzon is married and has a son with Asperger syndrome.

Next
Holtville Police Briefs: May 3-May 9