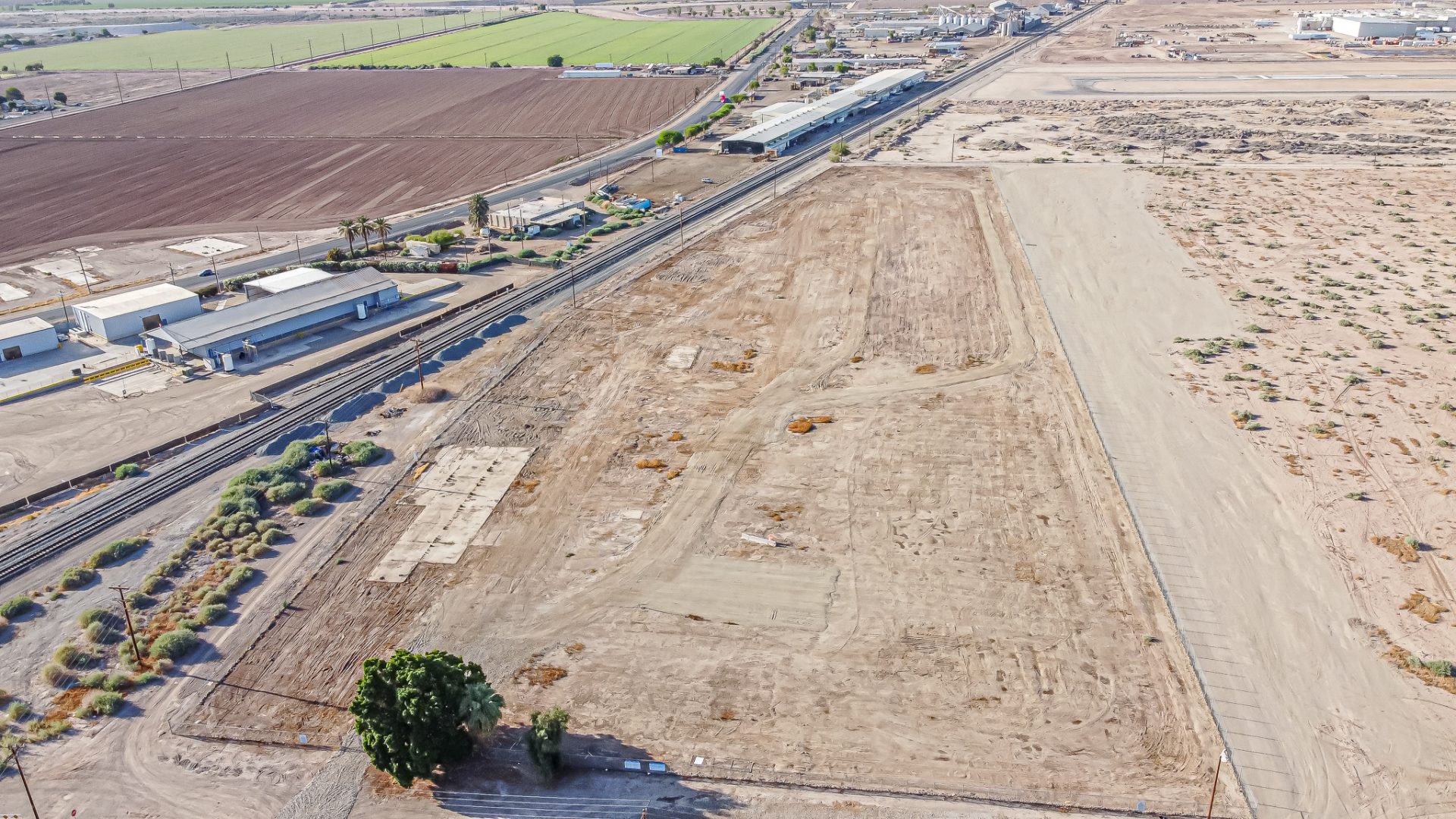 The 11-acre former PureGro site located at 1025 River Drive in northeast Brawley was first confirmed to be contaminated with pesticides and hazardous wastes by the state Department of Toxic Substances Control in 2003, and since then, getting the DTSC to fully remediate the site to the satisfaction of the community has been difficult. In recent year, much of the heavy lifting of a soil testing program around the site and a health study has been initiated by community-based organizations with help from a different state agency. | CAMILO GARCIA JR. PHOTO
In Regional News

BRAWLEY — Years of imploring state officials to undertake a community health assessment and sampling of soils from residences near the former PureGro facility in Brawley, where a stockpile of contaminated soil had been housed despite community members’ repeated objections, have resulted in action.

However, the state agency that is leading the initiative is not the agency that community members and their supporters had been repeatedly urging to have perform the work.

That it was the California Air Resources Board (CARB), and not the state Department of Toxic Substances Control (DTSC), that proved to be more receptive to community members’ concerns has only further fueled distrust of the latter, said Luis Olmedo, executive director of Comite Civico del Valle.

“That’s not the route that should’ve been taken,” Olmedo said, referring to CARB’s involvement instead of DTSC’s.

Olmedo’s remarks came during a virtual press conference on Thursday, May 13, where he was joined by a wide coalition of environmental justice and community organizations that are calling for the intervention of key state leaders to help reform DTSC.

The DTSC’s mission is to protect the state’s people, communities, and environment from toxic substances, restoring contaminated land to promote economic development, and to compel manufacturers to make safer consumer products.

Yet, listening to Olmedo and other speakers during the press conference, one gets the impression DTSC has deviated from its mandate.

On May 5, the coalition, which included several local community-based organizations, sent a letter to Gov. Gavin Newsom and key legislative leaders asking them to require DTSC to fully comply with civil rights laws and environmental policies, as well as develop accountability measures.

According to the letter, the coalition’s longstanding concerns about DTSC were heightened by Newsom’s general fund budget proposal to provide DTSC a one-time $300 million investment to support the cleanup and restoration of contaminated sites in communities across the state.

“(W)e are horrified by the idea that DTSC would receive $300 million for site investigations and remediation because we know — based upon DTSC’s record to date — that DTSC lacks the commitment to protection of public health which is necessary to properly and effectively spend that money,” the coalition stated in its letter.

(Read the letter regarding the DTSC in its entirety)Download

Jane Williams, executive director of the Rosamond-based California Communities Against Toxics, referred to Thursday’s virtual event as a precedent-setting press conference that included speakers from community-based organizations hailing from the southern border to the Bay Area.

She also characterized DTSC as a “common enemy” that tries to “cozy up” to developers and “basically rubberstamps cleanups.”

To help combat the perceived trend, the coalition of community-based organizations recommended in its letter to state leaders that they develop a report that identifies and reviews all of DTSC’s obligations under state and federal law.

That report would then be used to facilitate a discussion with stakeholders and the Legislature about how DTSC should expend its resources and how much funding is needed to meet its obligations.

“Because of DTSC’s long, well-documented history of dysfunction, community members whose health is being impacted by toxic exposures, and their allies, we oppose increasing fees or taxes before there is a clear plan for how DTSC will build effective regulatory and clean-up programs,” the letter stated.

Some of that alleged dysfunction was highlighted during Thursday’s press conference by Maricela Mares-Alatorre, a community organizer and policy advocate with the San Francisco-based Greenaction for Health and Environmental Justice.

The Kettleman City native reported her hometown of about 1,500 mostly Spanish-speaking residents is situated about three miles away from the Kettleman Hills hazardous waste landfill, considered the largest of its kind in the western United States.

When DTSC approved a permit in 2014 to expand operations at the landfill, residents objected and filed a complaint with the U.S. Environmental Protection Agency’s Office of Civil Rights in March 2015 alleging DTSC’s decision violated the community members’ civil rights.

After mediation, a settlement was reached in August 2016 that required DTSC to incorporate civil rights considerations and meaningful public participation in its decision-making process. Yet, Mares-Alatorre said the agency has not lived up to those conditions.

The coalition’s letter to Newsom also stated that DTSC has neglected to implement a strong hazardous waste reduction plan at the Kettleman Hills landfill and failed to consider cumulative impacts in its permit decisions.

“DTSC gives us this illusion that we’re part of the public process and participation,” Mares-Alatorre said. “But it’s a big waste of time.”

In Brawley, Comite Civico has partnered with CARB to help facilitate soil testing at residences nearby the former PureGro site, located at 1025 River Drive. The environmental justice organization will also assist CARB with a survey of the health of nearby households.

Border Travel Limits to Lift for Vaccinated in November

Community members had repeatedly requested that DTSC undertake both initiatives in response to what they perceived to be a cluster of serious illnesses among households that are located near the former PureGro site.

“But just because another agency stood up when (DTSC) didn’t have to doesn’t mean that we’re going to cut DTSC some slack,” Olmedo said following the May 13 hourlong virtual press conference. “Telling the community that what they believe and what they’ve experienced is not what they think it is only builds more mistrust.”

Previously, the DTSC told community members that it lacked the authority to undertake a community health survey.

Additionally, offsite soil testing that both DTSC and Chevron, the property’s owner, conducted in 2006 just beyond the site’s southern boundary failed to detect any significant number of contaminants, the DTSC told community members in December 2019 during a contentious townhall meeting at the American Citizens Club in Brawley.

As part of their joint initiative, Comite Civico and CARB have been working together for the past several months on the community health survey. The effort has enlisted the help of an advisory group that can facilitate interviews with community members and help them articulate their experiences, Olmedo said.

The community survey will supplement the soil testing as well, by guiding toxicologists’ areas of focus.

“It could never go wrong when you engage the community in this kind of study,” Olmedo said. “A lot of times science that is not informed by the community misses things.”

Prior to the 11-acre site ceasing its operations in 2000, a succession of companies had since the 1940s used it to formulate, store, and distribute agricultural fertilizers and pesticides.

The DTSC initially became involved with the property in 1994, when PureGro applied for a temporary permit to deploy a technology known as thermal desorption oxidation to treat contaminated soils.

DTSC has been working with Chevron to remediate the site, where an enclosed and covered 15,000 cubic-foot stockpile of contaminated soil had been stored and whose removal was completed in January as part of a remedial action plan that was adopted by DTSC with the community’s input.

An initial remediation plan proposed by DTSC in 2018 had called for the contaminated stockpile to be covered and remain on site. The plan was soundly rejected by community members.

Previous
BASKETBALL: Vikings Dominate Hornets on the Road
Next
LEGAL NOTICES: May 13, 2021