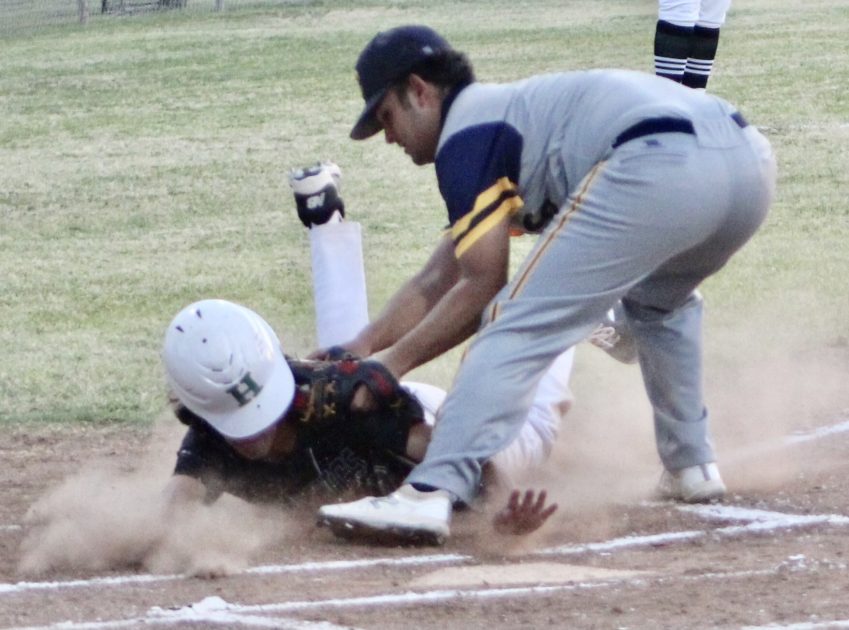 Holtville High School junior J.R. Garewal is out at home plate trying to score on a passed ball during an Imperial Valley League game against Calipatria in Holtville on Wednesday, May 12. CATHI PHILLIPS LARIOS PHOTO
Home
Sports
In Sports

HOLTVILLE – Scoring 40 runs in three games, the Holtville High School baseball team cruised to a 3-0 record during the week with a two-game sweep of Palo Verde of Blythe sandwiching a home victory over Calipatria.

The victorious week runs the Vikings’ winning streak to seven games and improves them to 11-6 overall and 7-3 in Imperial Valley League action.

On Tuesday, May 11, Holtville scored a 13-0 home victory over Palo Verde Valley High of Blythe. The Vikings put up single runs in the first and second innings then blew the game open with four runs in the third and four in the fourth to build a 10-0 lead.

Sophomore Raul Sierra pitched and got the win for the Vikings, allowing three hits with four walks and 12 strikeouts.

On Wednesday, May 12, Holtville hosted Calipatria and jumped all over the Hornets with eight runs in the bottom of the first inning en route to a 17-0 victory.

The offensive star of the night was Sierra who had two hits, including a triple, scored twice and drove in two runs. Junior Donovan Johnston had three hits, scored three times and drove in two.

Pacheco had a hit, scored twice and had two RBIs, while Buscaglia had two hits, scored once and two RBIs.

Garewal got the win on the mound for the Vikings, not allowing a hit in 4.1 innings with one walk and six strikeouts.

On Friday, May 14, the Vikings traveled to Blythe to again take on the Yellowjackets and came away with a 10-6 victory.

Garewal did his damage with the bat once again with three hits, including a double, two runs scored and two RBIs. Rafa Espinoza had two hits and an RBI and Buscaglia had a hit and scored three runs.

The Vikings host league-leading Southwest High of El Centro on Tuesday, May 18, at 6 p.m., then make the return visit to Southwest on Friday, May 21, with first pitch also set for 6 p.m.

Next
BASKETBALL: Vikings Dominate Hornets on the Road