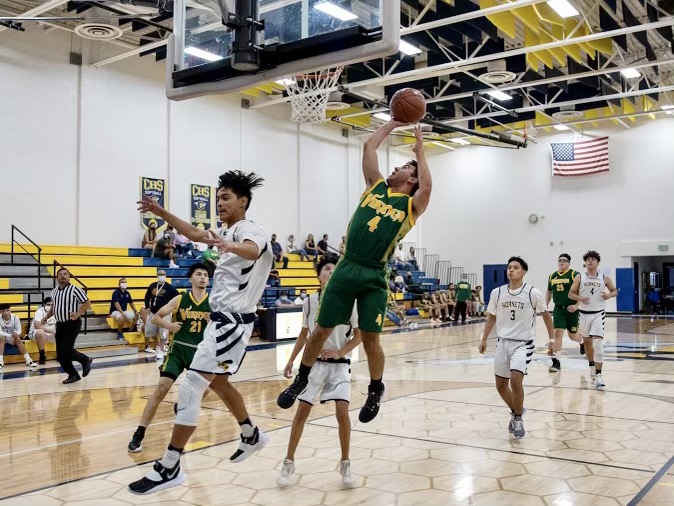 Holtville High School senior Abraham Ramos goes up for a layup during an Imperial Valley League game in Calipatria on Thursday, May 13. J.Q. QUESADA COURTESY PHOTO
Home
Sports
In Sports

CALIPATRIA – The boys’ and girls’ basketball teams from Holtville High School headed north on Thursday, May 13, for a matchup with Calipatria High School and both came away with lopsided victories.

The Holtville girls played first and scored a 59-15 victory against the Hornets, followed by the Vikings’ boys, who also dominated Calipatria with a lopsided 63-35 win.

The victory improved the Viking girls’ record to 5-1 overall and 5-0 in Imperial Valley League action. The boys currently sit at 4-2 overall and 4-1 in IVL play.

The boys got 12 points from sophomore Angel Perez and 11 points from junior Dorian Maize to lead the charge for Holtville.

In the girls’ matchup, the Vikings jumped out to a 17-1 lead at the end of the first quarter and had a comfortable 36-7 lead at the half.

On Monday, May 10, the Holtville hoopsters hit the road for a doubleheader against Central Union High in El Centro and while the girls’ team came away with a convincing 56-29 victory, the Vikings’ boys’ squad found the going tough and fell to the Spartans 57-27.

In the girls’ game, the Vikings jumped out to a 10-2 lead after the first quarter and added to the lead in the second period to take a commanding 30-10 lead into halftime.

Sophomore Kamryn Walker led the way for the girls, recording a triple-double with 21 points, 10 rebounds and 10 assists. She also added five steals to her resume as well.

Anderson finished with 14 points, six assists and six steals, while Moreno had nine points. Senior Litzy Velarde had a game-high 10 rebounds for the Vikings.

The boys’ squad failed to get much offense going against the Spartans with senior Roman Ordonez leading the scoring with just seven points while Perez chipped in with six.

Both teams will be back in action on Friday, May 21, traveling to Imperial with the boys’ game set to start at 5 p.m. and the girls’ tipoff scheduled for 7 p.m.