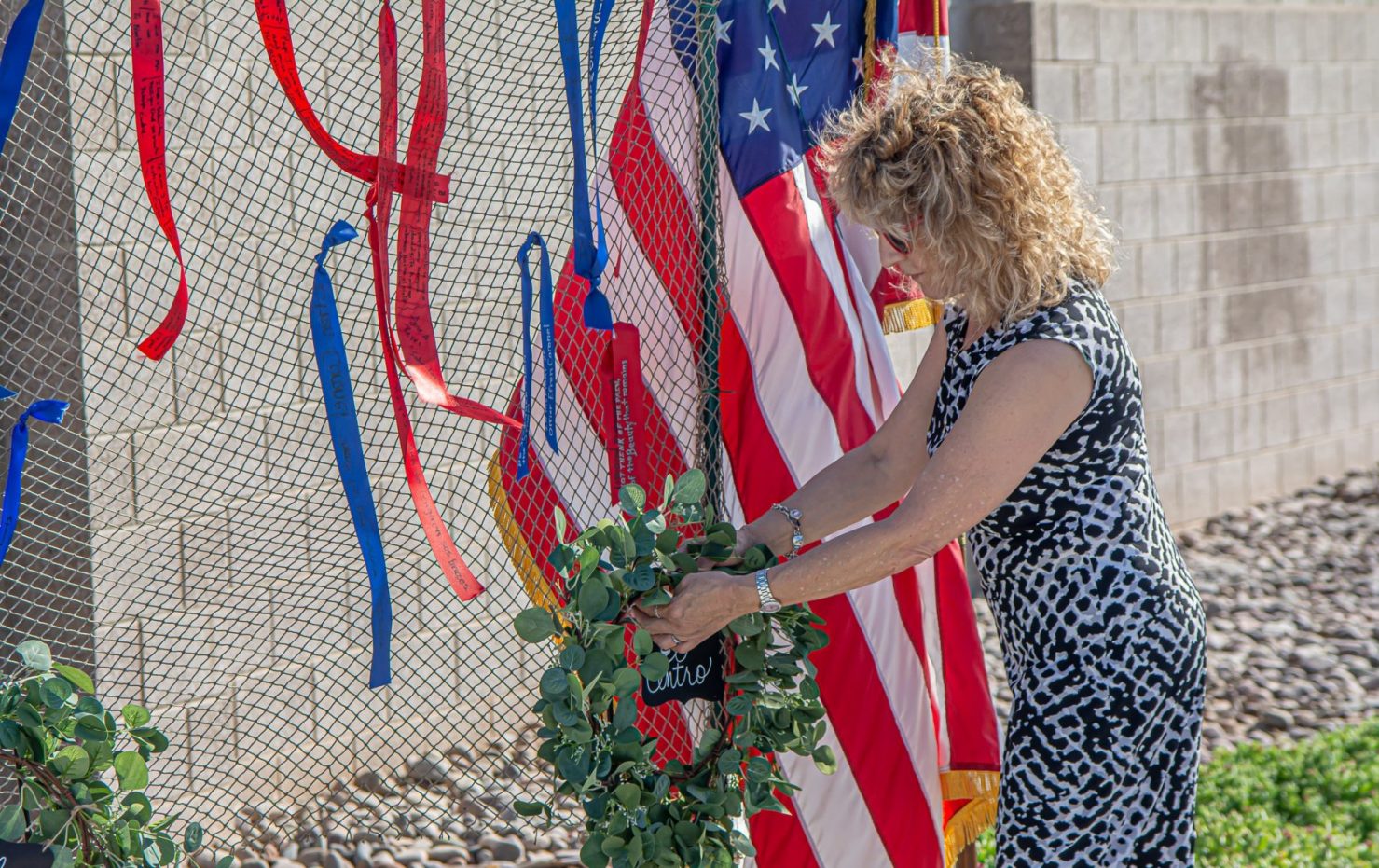 El Centro Mayor Cheryl Viegas Walker affixes a ribbon to the “Wall of Hope” with handwritten messages to pay tribute to Imperial County residents who have died from COVID-19 and for public safety personnel who have died during dedication ceremonies for First Responder Park in El Centro on Saturday morning, May 15. | CAMILO GARCIA JR. PHOTO
Home
COVID-19
In COVID-19Regional News

EL CENTRO — Children played, their energy filled the evening air as the sun set against the backdrop of the recently completed First Responders Park, in the shadow of the El Centro Fire Department headquarters on North Waterman Avenue.

Just to the south of the firehouse, on a breezy Saturday evening, May 15, was a somber reminder twisting in the wind of the year of tremendous loss and suffering Imperial County has endured in dealing with loss of life due to COVID-19.

Ribbons danced along a nearby fence, tied there earlier that morning and bearing the handwritten names and intimate messages from family members and survivors mourning loved one lost to the coronavirus and those who were first responders.

The act of remembrance came during an hourlong park dedication and message of hope to the county’s residents organized by the city of El Centro.

“It seemed fitting that it was at First Responders Park; they’ve played such a critical role in how we’ve gotten through this COVID (crisis) and it was to honor the dedication and the commitment to the community they’ve demonstrated,” El Centro Mayor Cheryl Viegas-Walker said Saturday afternoon. “It’s important for us to come together in an event when we recognize … what we endured together.”

The playground structure at the park was named after Michael Benavidez, an El Centro firefighter who died in the line of duty in 2004. Further, May 15 was also Peace Officers Memorial Day to honor those in law enforcement who lost their lives, including those lost across the county due to COVID, such as El Centro police Officer Efren Coronel, who died in June 2020 from complication of the virus contracted on the job.

As the newly established park filled with families later in the evening, a young girl and a couple of friends approached a reporter photographing the ribbons on the fence. Several of the children, none older than 10, were candid about the ways COVID-19 had turned their lives upside down.

One shared a little more than the others. She’d lost her mom and a grandparent to COVID, she said. Her father wanted to avoid publicity from their devastating loss and keep her identity guarded. He declined to be interviewed.

Surrounded by a few friends, the young girls shared their experiences of returning to school and of the impact the loss of family and close family friends that they have endured.

It was clear from some of the messages of hope and remembrance on the ribbons, that the girls were not alone in their grief. To date, some 722 Imperial County residents have died from the effects of COVID.

The morning event was limited in invitation by design, Walker said, and it wasn’t clear how many families of those impacted by COVID were in attendance.

“We wanted to reassure our community that we are there for you,” she said, referring to the emphasis on city representatives, who were there to send a message of hope to their respective communities. In attendance were five mayors, one mayor pro tem and one council member, as well as county representatives.

The essence of not being alone in this process of grieving, Walker added, was what the city was hoping to initiate by bringing together multiple agencies and many people who experienced similar heartache and loss.

In addition to addressing the unexpected troubles of the last year and those going forward as the county begins to reopen for “normal” activities, Walker noted that it’s the loss of a community as a whole and the spirit of supporting each other that will pull it forward to the next chapter after this pandemic.

Next
SOFTBALL: Vikings Smashing Opponents on the Diamond