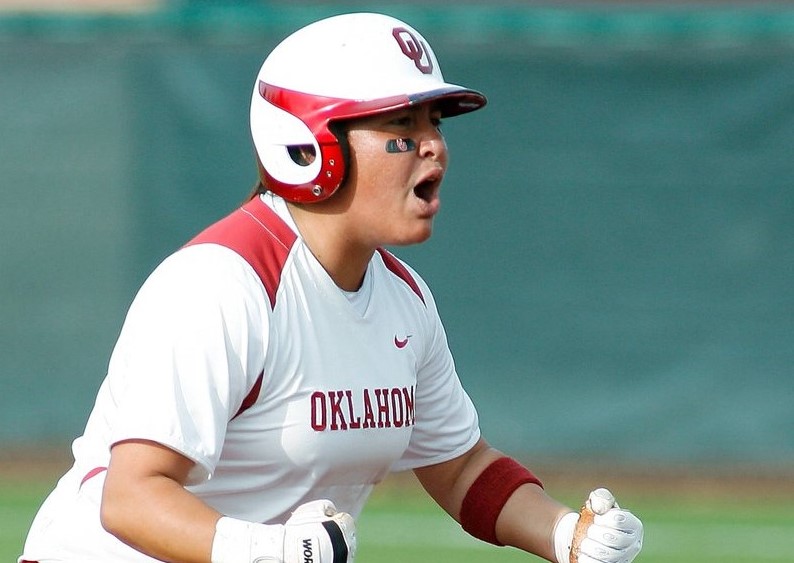 Calexico native Amber Flores celebrates while on the field playing for the University of Oklahoma Sooners softball team. | COURTESY PHOTO
In Sports

SEMINOLE, Okla. — Softball has taken Calexico native Amber Flores all over the United States and now it is bringing her to within an hour of her hometown.

Flores, a 2006 graduate of Southwest High in El Centro who lived in Calexico and is now the ninth-year head coach at Seminole State College in Seminole, Oklahoma, has her team headed west for the National Junior College Athletic Association Division I Softball Championships set for May 25-29 at the Pacific Avenue Athletic Complex in Yuma.

Yuma, and Arizona Western College, has been chosen to host the World Series this year and in 2022.

“We came in as the top seed and got upset,” Flores said. “It was probably the worst we’d played all year so we had to go out and win three to get out of the regional.”

While her team was battling through three games on May 16, Flores had some selfish reasons to motivate her squad to reach the World Series.

“When we lost the first game at the regional I told the girls that this is more than just ‘let’s make it to the World Series,’” said the 32-year-old Flores. “I haven’t gotten to see all my family since the pandemic. Getting to this World Series just has a deeper meaning. To know I’ll be able to see my family and my players get to experience where I grew up is just amazing.”

Growing up in Calexico and the daughter of a baseball coach, Flores always found herself playing softball or baseball throughout her childhood.

“I started off playing baseball. I was attached to my dad’s hip as he was the assistant baseball coach at Calexico High School,” Flores said about her father, Alex. “I always wanted to be around him and the game, so there I was, this little kid probably bothering everybody at high school practices.”

Eventually, she would go on to star on the softball field at Southwest in El Centro and played for current Eagles’ coach Stephanie Niebla before heading to the University of Oklahoma. There, Flores would gain national attention and arguably become one of the most highly decorated collegiate softball athletes ever.

In Oklahoma, Flores earned NCAA All-American status three times and was the first-ever, two-time Big 12 Conference Player of the Year. When she finished playing for the Sooners, the slugger was the Big 12 and Oklahoma career record holder for home runs.

As a Sooner, she set numerous records for the nationally recognized program, including in walks, extra-base hits, slugging percentage, and on-base percentage.

In addition to her accolades at Oklahoma, Flores was a three-time finalist for USA Softball’s Collegiate Player of the Year award and was selected fifth overall in the 2010 National Pro Fastpitch draft by the USSSA Pride.

Flores started her coaching career as the hitting and outfield coach for NCAA Division I Stony Brook University in Stony Brook, N.Y. And she is an assistant coach in the summer for the Chicago Bandits, a professional team in the NFP (National Pro Fastpitch).

As wonderful as her softball journey has been, nothing may top the feeling if her Trojans can win the World Series title in Yuma.

“I spent a lot of time in Yuma as a child, and it’s just crazy to think that’s where I got my early start in softball and it’s where I’m now taking my team to try to win a national title. It’s crazy,” Flores said.

As a side note, the Yuma Pacific Avenue Athletic Complex, where the World Series is being played this year and next, is a state-of-the-art 50-acre sports complex built in 2017 by the city to attract high-profile tournaments with its six 325-foot fields.

The World Series is not new territory for Flores or Seminole State as the Trojans have reached the championship event three years in a row and four of the eight years Flores has been at the helm.

“The newness has worn off and now it’s to the point where we’re not happy just to be here,” Flores said. “We want to be able to make some moves and hopefully walk away in a great spot.”

While it is a “business” trip for Flores and the Trojans, she did say the team bus would be venturing to Calexico to visit her family home and show them how close she grew up from the international border.

“For them to get to go to Calexico and see where I grew up … I’m super pumped,” Flores said.