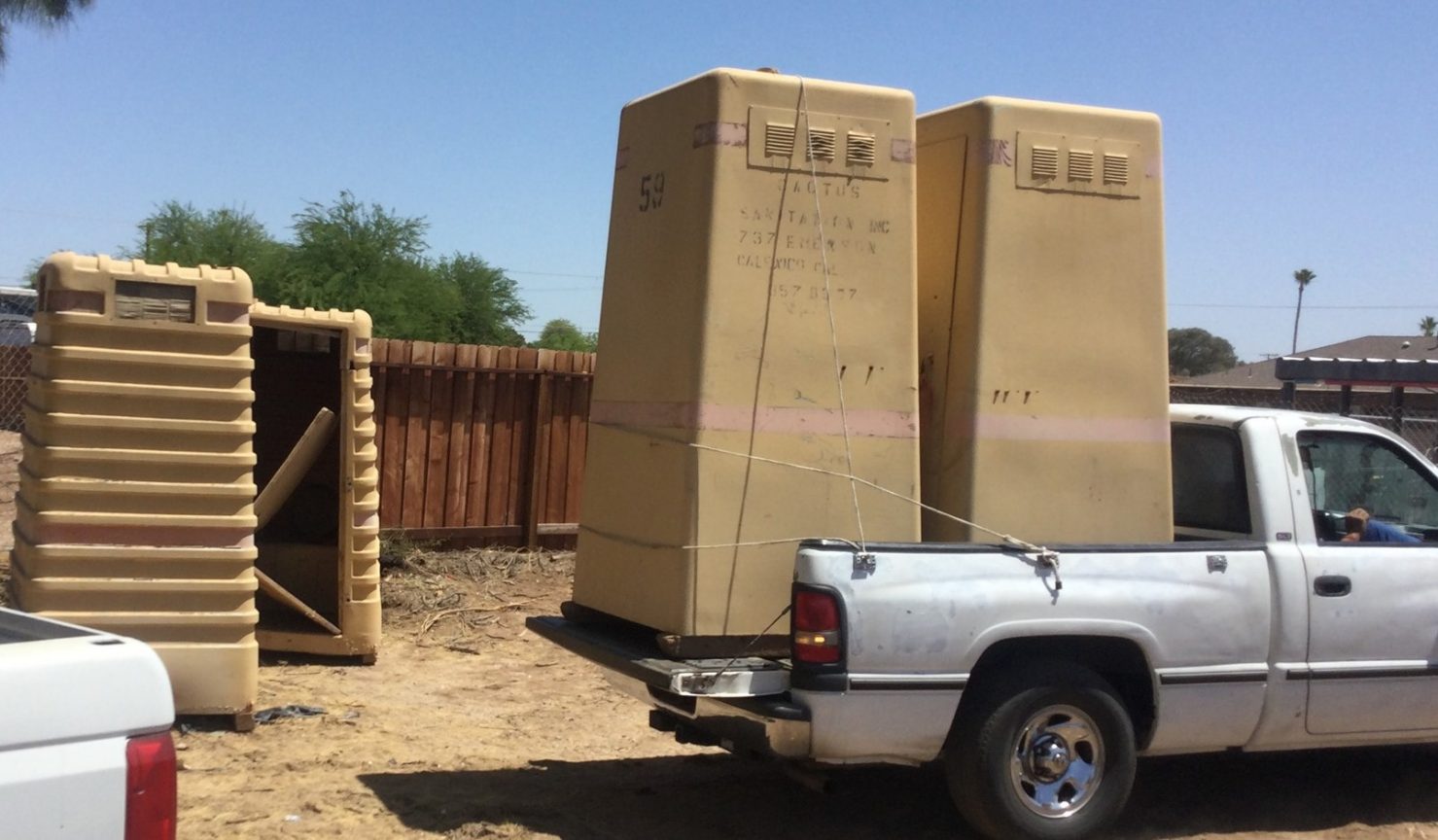 A coalition of farmworker and community activists are in the process of refurbishing five donated portable toilets for their proposed use by farmworkers who don't have access to restrooms in downtown Calexico as they wait for their workday to begin. | PHOTOS COURTESY OF ERIC REYES
Home
Regional News
In Regional News

CALEXICO — A coalition of farmworker and community advocates in the process of refurbishing portable toilets for their proposed use by farmworkers in the downtown area has accused the city’s police chief of prematurely expressing opposition to the project.

Speaking on behalf of the group, Brawley resident Eric Reyes said that the coalition had always intended to seek the city’s guidance and approval for the project prior to any attempted installation of the portable toilets in the downtown area.

But that planned outreach has now been frustrated by a pre-emptive email that coalition members received from Police Chief Gonzalo Gerardo on Friday, May 14 advising the group of the potential consequences of placing unpermitted and non-compliant portable toilets on public property within the city.

Gerardo’s email, Reyes said, amounted to “bullying” and was “unprofessional.”

Next, the you-know-what could hit the fan at the Calexico City Council meeting, where Reyes said on Wednesday morning, May 19, that he just might raise a stink over the issue at the meeting later in the day. That would likely come during public comments.

“There was never an issue of us not wanting to work with the city,” Reyes continued Wednesday morning. “It’s just a dream right now. You don’t try to squash a dream.”

In contrast, Gerardo characterized his email to coalition members as being sent in a proactive manner after initially hearing about the proposed project from concerned community members.

“They should’ve reached out to (the city),” Gerardo said on Wednesday, May 19. “We found out (about the coalition’s proposed project) through social media.”

On May 12, Eric Reyes had shared pictures on his Facebook page of multiple donated portable toilets that the group planned to refurbish so that they could be used by farmworkers who cross from Mexicali into Calexico each night and typically do not have access to a restroom during the hours that they wait for their workday to begin.

Gerardo’s email, which he shared with this newspaper, requests that project proponents apply for a conditional-use permit in advance of any attempt to place the portable toilets in the city’s downtown district.

“If no permit or approval is given to you before you place them, the Calexico Police Department and/or the Public Works Department will have to remove them to a safe place for pick up,” the email stated. “In addition, the City of Calexico will send you a bill on any labor and equipment used to move these portable toilets.”

The four-paragraph email also goes on to explain that based on Gerardo’s review of the pictures of the portable toilets in question, they do not appear to be compliant with federal American with Disabilities Act regulations requiring that public restrooms be accessible for disabled persons.

Upon finding out about the proposed project, Gerardo said he reached out to City Manager Miguel Figueroa and the city’s Public Works Department to inquire if they were aware of the planned initiative.

When neither Figueroa or public works personnel expressed any knowledge of the plan, Gerardo said he determined the matter could potentially be an enforcement as well as liability issue for the city, especially if the coalition failed to apply for the proper permits or install an adequate amount of ADA-compliant portable toilets.

ADA regulations require that, depending on the number and placement of the publicly accessible portable toilets, a certain number of ADA-compliant units would be required, Gerardo said.

Gerardo further explained that ADA regulations do not require that certain sites have ADA-compliant restrooms if the expectation is that they will be predominantly used by non-disabled individuals, such as at a construction site.

“At the end of the day, the city will be liable for whatever is up there,” he said. “It’s not about not having them, it’s about going through the process.”

Since his initial email with the coalition members, Gerardo has sent further information about the permitting process at the request of the legal counsel that is advising the coalition, which includes Comite Civico del Valle, Salud Sin Fronteras, Imperial Valley Equity and Justice Coalition, Los Amigos de la Communidad IV, SOS Migrantes, and the Our Roots Multicultural Center.

Currently, the proposed project remains in its preliminary stages and is focused on the refurbishment of the five donated portable toilets the coalition had recently received. Reyes said up to 100 of the units are available for free if they are needed.

Additionally, a project fundraiser that was started by a supporter of the initiative was done so independently of the coalition, which already has the funds needed to refurbish the portable toilets it has in its possession.

As food for thought, Reyes asked why the city had no issue with two portable toilets of the same type that were placed in a parking lot at the corner of Third Street and Paulin Avenue in March and April by a coalition member, Hugo Castro.

Reyes said the toilets were “across from Donut Avenue, which is a major gathering point for farmworkers during harvest season. He rented them and paid for the servicing of the restrooms for a month and a half, I believe.

“The city did not have an issue with those during the time they were there,” he added.

This point was brought up in the series of back-and-forth emails between Gerardo, Reyes, and other coalition members. Reyes said he has yet to get a response on that particular issue.

For his part, Gerardo said he did not see Reyes’ question in the flurry of emails. Still, he said the reason those portable toilets were not touched was that whomever put them there dealt directly with city administration, and by the time he became aware of them, the chief was told they would be gone in two weeks.

Going forward, the coalition will likely host its own fundraiser to help cover the costs associated with the hiring of a professionally licensed entity to clean and maintain the portable toilets, Reyes said.

“We are moving forward as a coalition on the project step by step,” he said. “First are the repairs to make them operational.”

In a Facebook video that Reyes livestreamed on May 14, he questioned why other portable toilets that he observed throughout the city did not appear to be ADA-compliant and why a city that has traditionally been supportive of farmworker advocates’ efforts appears now to have taken a different tact.

On Wednesday, as on his Facebook video, he characterized the issue as one of dignity and respect for farmworkers, who are often forced to urinate and defecate in public and private spaces in the city’s downtown district because of the lack of public restrooms.

“What modern city in the United States would continue to allow that to happen?” Reyes asked. “If we have to work outside the system, we may.”