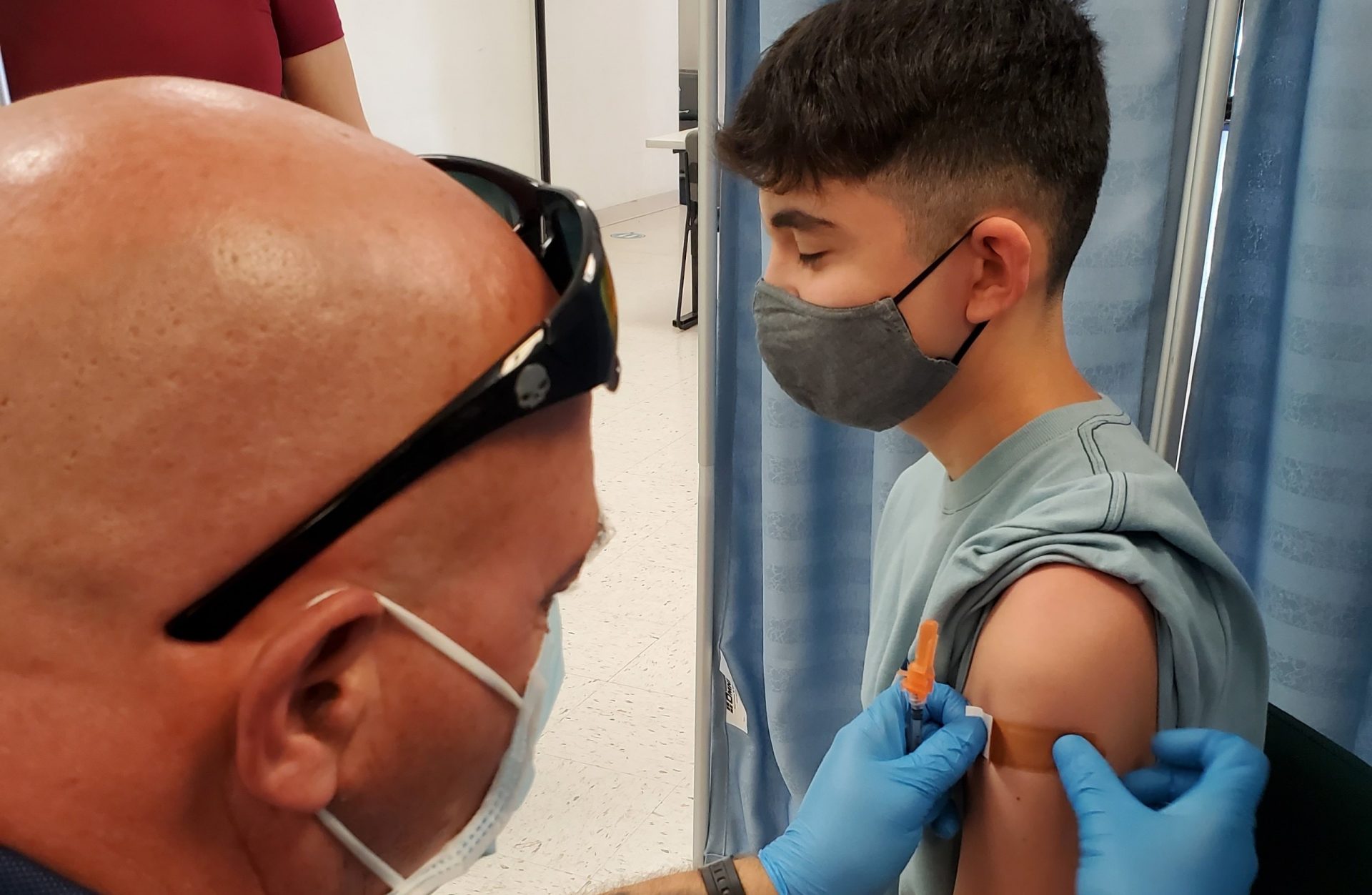 Jesse, a 15-year-old Calexico High School student, is vaccinated during an Imperial County Public Health Department clinic in El Centro on Friday, May 14. Jesse's last name has been withheld by the county. As of Tuesday afternoon, May 18, the county had administered first doses to some 273 youths ages 12-15. | PHOTO COURTESY OF IMPERIAL COUNTY PUBLIC HEALTH DEPARTMENT
In COVID-19Regional News

The first confirmed pediatric death from COVID in Imperial County this week has been a grim reminder that the pandemic is still upon us in an all-too-real way, and the young are very much vulnerable to its effects.

Although Imperial County Public Health has said the child, who was under the age of 9 at the time of death several weeks ago, “was found to have no underlying health conditions,” officials are advising of the continued urgency to vaccinate the public and eligible youths.

Even before the tragic news was shared Tuesday morning, May 18, a number of parents have already taken the initiative to inoculate their children against the SARS-CoV-2 virus that causes COVID-19 as soon as the opportunity arose late last week, when 12- to 15-year-olds were officially cleared to take the Pfizer-BioNTech vaccine.

Carly Zamora of Brawley and Jimmy Gonzalez of El Centro were two such parents, both choosing to have two sets of children vaccinated, each with one healthy child and one child with a pre-existing condition that makes the threat of contracting COVID that much worse.

Public Health had little to add during its weekly report on Tuesday about the pediatric death, but in the department’s Monday statement, Public Health Officer, Dr. Stephen Munday struck both a mournful and cautious tone.

“It is heart-wrenching to lose a child under any circumstances. Our condolences go out to the family and to the many families that have suffered loss related to COVID-19,” Munday stated.

“Since children under the age of 12 are not yet eligible to receive a COVID-19 vaccine, the best approach we can take to protect the children in our community is to make sure those around them, who can get vaccinated, do get vaccinated, and that we all continue to follow those measures that prevent transmission of the virus,” he added.

On the first day that tweens and teens 12-15 could receive the vaccine, which was Thursday, May 13, Pioneers Memorial Healthcare District allotted an extra amount during what was supposed to be a second-dose Pfizer clinic, spokesperson Karina Lopez said.

How many 12-15-year-olds have been vaccinated since Thursday, is difficult to assess. The county’s vaccine surveillance dashboard has yet to include the 12-15 age range, and as of Tuesday afternoon, Public Health said it has administered a first dose to 429 youths ages 12 to 17 — 273 of whom were in the 12-15 range.

Yet that was only for Public Health clinics and did not account for Pioneers, El Centro Regional Medical Center, Dr. Tien Vo, and other providers, all of whom had some engagement toward the tween/teen set this and last week.

So far, 52.5 percent of Imperial County’s eligible population over the age of 12 has received at least one dose of vaccine, Public Health Director Janette Angulo said Tuesday morning. There are an estimated 10,843 12- to 15-year-olds and 5,207 16- and 17-year-olds in the county per the California Department of Finance, she said last week.

Two of those youths were under the care of mom Carly Zamora and were among the 60 vaccinated at Pioneers’ clinic in its health suites north of the hospital.

Even before 12-year-old Xavier Zamora became eligible to be vaccinated last week, his mother said he’d been asking if he could get the shot as soon as it became available, due to a health condition.

“My son is a cardiac patient, he has a cardiac defect,” she said. “And my daughter (14-year-old Breauna) asked as well. She is a cheerleader at Brawley Union High School and would like to get back to normalcy and cheer on the field next year.”

In fact, just about everyone in Carly Zamora’s immediate and extended families, including her 88-year-old grandmother, are inoculated.

Zamora has spent the last 15 months with a Ground Zero view of the effects of COVID as chief of clinic operations at Pioneers Memorial Healthcare District, so it goes without saying that she had few qualms about seeing her tween and teen among the first.

“Throughout the last year the pandemic has really taken a toll on all families, and I think it’s really important for our children to get vaccinated so we’re able to move forward in a safe way as a community,” Zamora told the Calexico Chronicle on Friday evening, May 14.

As trust in the vaccine and hesitancy has continued to be an issue for much of the country as vaccination rates have slowed, Dr. Munday spoke in a little more detail earlier last week about the efficacy and safety for those in the newly eligible age range.

“The data are actually very encouraging. There should be very, very strong efficacy in this age group (which is) not surprising because this is a group that has a very strong immune system,” Munday said on May 11. “And the safety data look really good as well.”

At present, Pfizer is the only of the three emergency authorized vaccines rated for children as young as 12. Both Moderna and the Janssen/Johnson & Johnson vaccines for age 18 and up.

“I would note that both Moderna and J&J are also looking at safety and efficacy in these age groups. And we’re expecting that additional vaccines will be made available for this age group in the not-too-distant future,” Munday added last week, but that had not changed this week.

The health officer noted that both for the COVID and the flu vaccines, the trend will be toward the younger.

“We actually expect they will continue to look all the way down to the age of 6 months, which is the age that we also start administering flu vaccine,” Munday said. “I expect this process will move pretty quickly.”

Jimmy Gonzalez of El Centro also had his children vaccinated over the weekend, one 12 and one 16, the eldest of whom has severe autism and epilepsy, and Gonzalez was concerned that the potential for fevers if his son, Santiago, were to contract COVID could trigger life-threatening seizures.

Gonzalez is no doctor, and he said as much, but as a parent of a child on the severe end of the Autism Disorder Spectrum and the president of active and science-minded Autism Support of Imperial County, he’s a pretty solid source of information.

He told the Chronicle on Sunday that many children on the spectrum — about 25 percent — develop some level of seizures during puberty.

“It a double-edged sword of how he would react to receiving the vaccine or him actually getting COVID and (seeing how) his body would react,” Gonzalez said.

“I knew that it was something was important for him. The reason why we had waited was his younger sister is 12, and now she is in the new category, and she said, ‘I want to do this for my brother. I want to keep him safe, and I don’t want to pass it to him,’” Gonzalez said.

It wasn’t easy to get Santiago vaccinated, Gonzalez admitted. There was negotiation that had to happen.

“He’s going to have to go back to school, to be part of the community and can’t stay in a bubble forever,” he said on Sunday, May 16. “We knew he could watch his sister go through it and he could watch her not be fazed by it.”

Ana Leia did go first to set the example, and mom, Luz Genel, was there with the promise to buy the largely nonverbal Santiago more of his beloved DVDs, which are an outlet central to the teen’s life, his father said.

Dr. Vo’s staff did a remarkable job, Gonzalez said, and overall Saturday’s clinic was a safe environment for much of the disabled community’s children.

While the clinic inside Southwest High School’s Jimmie Cannon Performing Arts Theater was billed as being open to the public, a portion of the spacious lobby and waiting area was dedicated to San Diego Regional Center children and their families, Gonzalez said, which been coordinated in part through Angie Peña, who works at the center is and a longtime volunteer with Vo’s clinic and nonprofit arm.

Gonzalez has participated in coordinating youth-oriented vaccination clinics at Southwest theater in the past, connecting Vo’s office to Southwest officials, who have said they hope to serve as a youth vaccination hub for the community.

Gonzalez agreed Sunday that it is an ideal location, as there is plenty of room to keep people apart and allow the 15-minute observation time required in comfort and to separate the San Diego Regional families.

He said Autism Support will assist on future clinics at that location, along with Vo, San Diego Regional, and the Central Union High School District.

“We’ll be back there in three weeks for the second-dose clinics,” Gonzalez said, not only for Santiago and Ana Leia’s sake, but for all of those who will benefit from such a locale. “Cannon theater will be used more frequently because it’s so hot; it’s easier for an indoor clinic.”