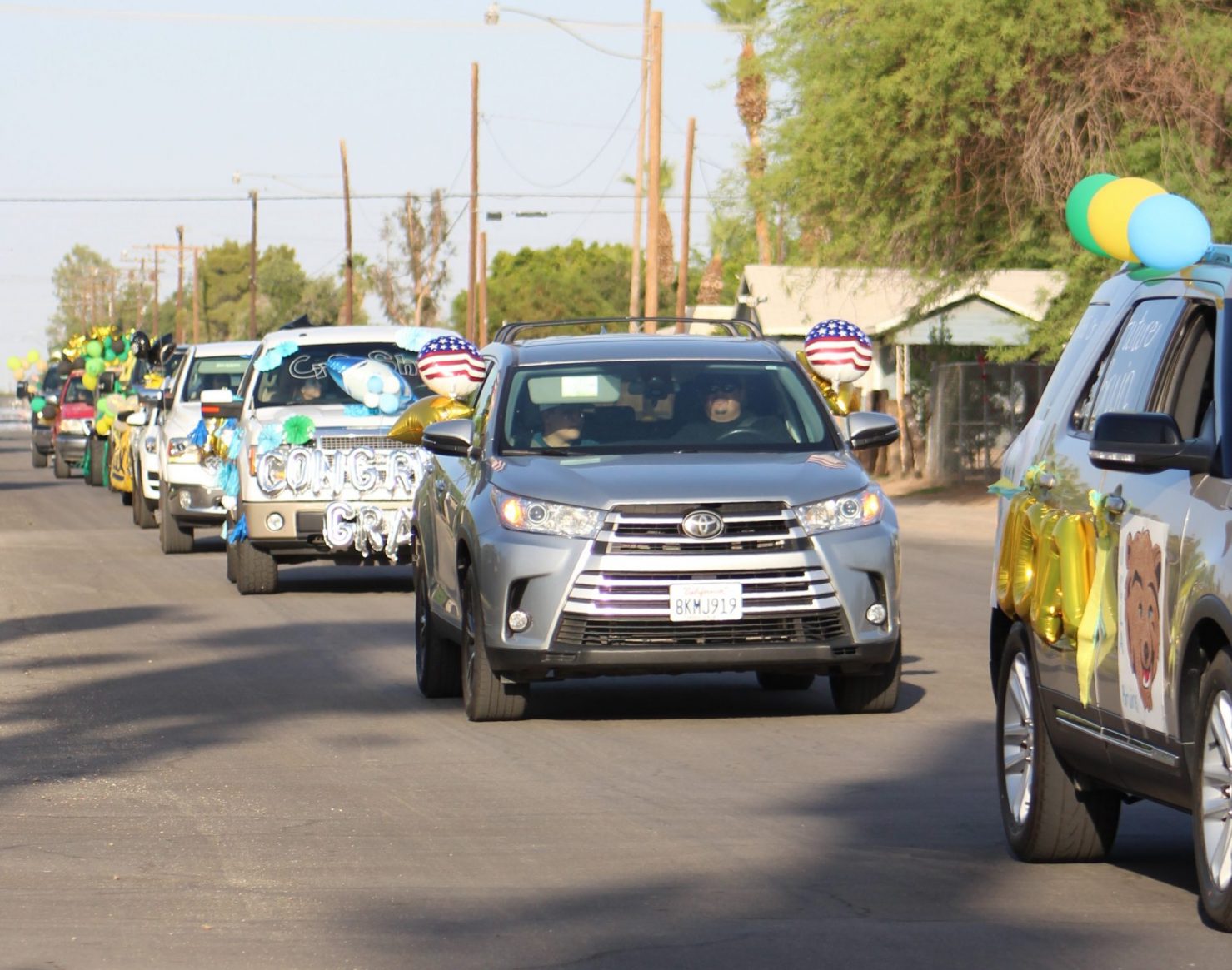 HOLTVILLE — For many students, distance learning and cancelled activities may rightfully be considered the hallmarks of the 2020-21 school year, even as they return to campuses in limited fashion.

But for the scores of Holtville High seniors who participated in a senior parade on Friday afternoon, May 15, and followed that up with their prom on Saturday night, May 15, the would-be graduates have also been given a much-needed sense of normalcy.

Eighteen-year-old senior Leonela “Leo” Gonzalez said the cheerful gathering for prom was a blessing for her, after a year that was largely void of many traditional senior experiences.

“Overall, it’s been super different, but I’m really grateful for the opportunity we have gotten,” Gonzalez said on Monday, May 17. “I felt really happy just being able to see everyone.”

The relatively compact senior parade that wound through the streets last Friday was a chance for many of the participants to proclaim what colleges they would attending with brightly colored posters and banners announcing as much. That event was reportedly coordinated by the school’s Associated Student Body.

Yet it’s been the events put on by parents in the community — such as a welcome back barbecue earlier this year — that have helped make the challenges of COVID a little easier to bear.

Saturday’s formal dance was hosted at the Barbara Worth Country Club and organized by a small group of parents — many of the same who helped with the previous luncheon — who wanted to provide graduating seniors with fond memories as their final year of high school came to a close.

The event also took the place of a similar event that Holtville High was considering hosting but that would’ve included additional restrictions on slow dancing, food and beverages, and attendance amid the pandemic.

Though Gonzalez said she likely would’ve attended the high school’s sponsored event, had it gone forward, its limited activities would’ve put a slight damper on her and attendees’ overall moods.

“It would’ve been a little sad not getting that full experience of prom,” the president of the Holtville High FFA chapter said.

Instead, the more than 100 seniors in attendance were treated to a dinner of chicken and pasta, and a designated dance floor that kept them on their feet until midnight.

“I was very grateful for the parents who actually took the time to put this together,” said Gonzalez, who will be enrolling in the fall at University of California, Irvine, where she will major in early childhood education in the hopes of one day becoming a kindergarten teacher. “It was kind of like our last big event.”

Fellow senior Abraham Ramos also said the prom provided him with an opportunity to see a lot of friends and people that he normally would’ve seen at school but hadn’t in a while.

“I felt relief being able to see my friends and be able to talk to them and hang out with them,” Ramos said on Tuesday, May 18.

Like many others concerned about potentially contracting the coronavirus, Ramos said he and his family had spent much of the pandemic isolated in their homes.

Lately, the Vikings football wide receiver and running back, as well as basketball player, has been venturing out more often to see close friends and resume playing in competitive sports.

Ramos, who was accompanied to the prom with a friend who also went “solo,” or without a date, joined additional friends once there and stayed for the duration of the event, which lasted from 5:30 p.m. until midnight.

“I believe it was a great turnout,” said Ramos, who is an avid gamer and is scheduled to attend DigiPen Institute of Technology in Seattle, where he will study computer science and game design.

The cost of the prom ticket also came with a complimentary breakfast the morning of Sunday, May 16, which Ramos said he attended with his mother, Bertha Ramos, who had helped organize the prom.

“What the parents did for us was amazing,” Abraham Ramos said. “Since we weren’t really able to do anything, they stepped up and gave us something to do as our last year as seniors.”

The small group had met with high school officials, who had notified the parents that the prom it was considering hosting would prohibit food or snacks, slow dancing and that beverages would be limited to water or soda, Chavez said.

Yet, the campus officials also let it be known that parents were more than welcome to organize an alternative event that could potentially be more to the students’ liking.

“They kind of planted that in our heads,” Chavez said on Monday, May 17.

Initially, one of the lead parent organizers recommended the parent group try to find another parent who might want to take the lead for such an undertaking.

But when no one stepped up, the parent group decided to tackle the effort among themselves and with the help of volunteers, much like they did with the senior luncheon.

“We worked really well together,” Chavez said about the informal committee of parents.

The task of seeking sponsorships was delegated to Chavez, since she has undertaken similar activities in the past on behalf of other local organizations.

In the end, attendance went beyond the group’s expectations, with some 130 tickets getting sold in advance, and another handful at the door the day of the event, Chavez said.

“Everything just started falling into place,” she said. “It was a good event, thank God.”